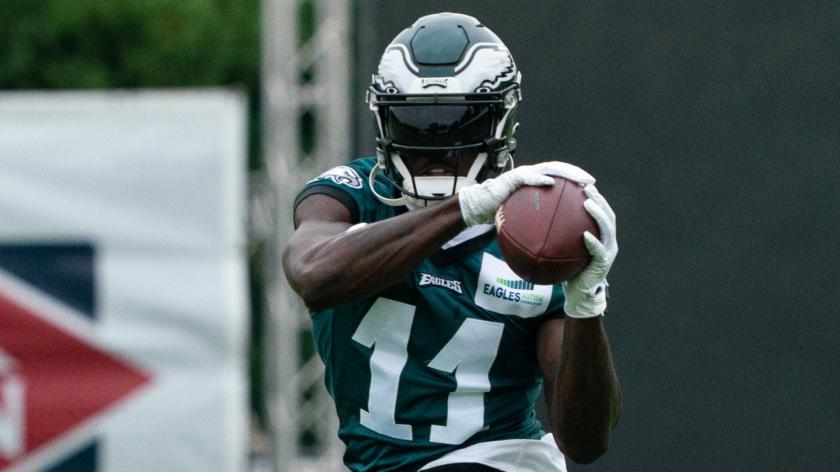 The Eagles started working out at training camp a few days ago. There was much anticipation of seeing this immensely talented football team begin the journey of coming together as a single unit going in the same direction.

On the first day, the Birds offense got the best of their defense.  On the second day the defense got the best of the offense.  Quarterback Jalen Hurts was outstanding on the first day as he made quick reads and got the football out of his hands immediately.  His throws were on the money and he did everything head coach Nick Sirianni could have dreamed during the off season.  Hurts was hitting the receivers in stride, so that they can continue to run with the football after catching it.  I was starting to think about a Birds deep playoff run.

Unfortunately on the second day everything fell apart for the Eagles pass offense.  Many of the throws from Hurts were high and off target. He threw one pass into a crowd and Eagles cornerback Avonte Maddox went up high and pulled it down.  The Birds defense dominated the offense.

This is what you usually see at training camp.  The defenses have an advantage on the offense because timing is an ingredient that requires repetitions to develop, while the offense is developing their timing, the defense is winning the battle.  I see a promising year for both the Eagles passing offense and passing defense.

During training camp thus far, I see the newly acquired Pro Bowl wide receiver A.J. Brown working on crossing routes, which are very effective when you have an outstanding running game.  Brown who is a good blocker, will be very difficult to cover when he goes in short motion inside and comes flying across the middle at the snap of the football, as Hurts fakes a handoff to one of the running backs.   Brown then catches the ball on the run and looks to run over the first tackle.  The former Tennessee Titan this guy is very difficult to tackle.  He looks like a big running back rather than a wide receiver.

I’m also seeing the Eagles getting their tight ends involved in the passing offense with Dallas Goedert and company running crossing routes, after run fakes.  On the play action fake, the linebackers will bite up or move out of position by chasing the expected ball carrier.  Goedert uses his speed to get open, then he gets north and south immediately after catching the football.

These crossing routes let me know that the Eagles aren’t going to get away from what they do best, which is Run The Football.  They are going to continue to run it, but they’re going to work in a dynamic passing attack off of it, with Brown and the tight ends.  Their play action pass offense will start with the crossing routes, then they will add deep throws to Brown, DeVonte Smith and Quez Watkins. Watkins made a great diving touchdown catch on the first day of workouts.  He’s probably they best deep threat.

Concerning the running backs, I can tell you right away that second year running back Kenny Gainwell is putting pressure on Miles Sanders because Gainwell catches everything that is thrown his way.  He is a very good route runner and consistently gets open.  On the other hand, Sanders was double catching the ball on the first day.  We all know that Sanders has game breaker skills.  He can take any run or pass play to the house on any given play, but he had better start being consistent or he will be sitting and watching Gainwell and Boston Scott get the playing time.

In addition, they’re also getting work in that five-man front defense, which is a pass pressure defense.   This is one of the reasons they went out and got pass rushing linebacker Hassan Reddick.  The Birds were horrible at rushing the passer a year ago and Reddick is part of the solution.  He’s going to be coming sometimes and he’ll be dropping sometimes.  It will be tough for quarterbacks to figure out when he’s blitzing and when he’s dropping.

Offenses had success running the ball against the Eagles five-man front a year ago, so that’s one of the reason they drafted mammoth defensive tackle Jordan Davis in the first round.  Davis is great at taking on double teams and creating piles.  He’s so big, strong and athletic that he’s tough for two guys to block.  I think the youngster fits very well in the middle of their five-man defensive front.  He will help stop the run, while Reddick comes off the corner looking to get sacks and force turnovers.

Defensive coordinator Jonathan Gannon is thinking and talking turnovers because they create victories.  He has a tremendous combination of linebackers and safeties to utilize in pressure and coverage defenses.  This will keep the opposing offenses guessing.

Former Charger linebacker Kyzir White is a converted safety, who is adept at covering tight ends and playing pass defense.  He can run like a defensive back, yet he will come up and tackle.  Former Niners safety Jaquiski Tart is a big safety, who can tackle like a linebacker.  Gannon will be able to utilize White and Tart in multiple defenses to keep offenses guessing.

Rookie linebacker Nakobe Dean is another piece of the puzzle.  He’s an outstanding cover linebacker, who may be the signal caller for Gannon’s defense.  Birds veteran linebacker T.J. Edwards will have something to say about Dean taking over because he showed playmaking ability a year ago.  Linebackers Davion Taylor and Kyron Johnson will also be battling for a role on the defense. All in all, Gannon has plenty of talented players at the linebacker and safety positions to keep quarterbacks guessing about what coverages they’re going to see.  He wants to keep quarterbacks in doubt because that causes turnovers.

The addition of former Pro Bowl cornerback James Bradberry will allow the Birds to be much more aggressive this time around.  They will have no problem playing man-to-man outside with Bradberry on one side, Pro Bowl cornerback Darius Slay on the other and Maddox matched up in the slot.  I think you could put those three corners up against any group in the NFL.  That’s an outstanding group of cornerbacks and I think that they’re going to have a big year because they’re teamed up with a very good pass rush.

We will see if Gannon is really head coaching material because he has all the pieces needed to develop an aggressive ball-hawking defense that forces turnovers.