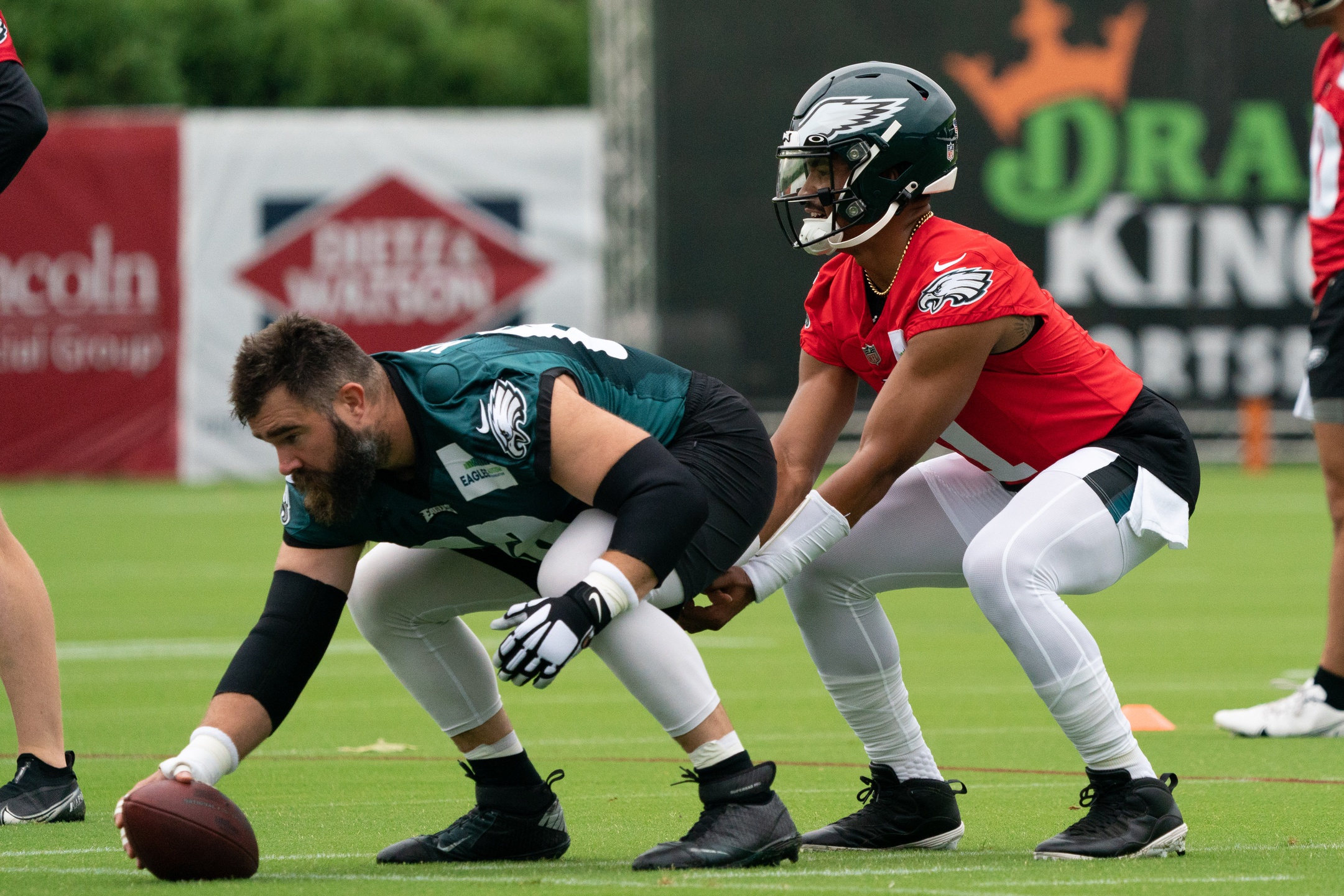 Eagles quarterback Jalen Hurts was 1-2-3 and the ball was coming out in their first training camp practice. I was very excited about that because the young quarterback hadn’t been able to execute the offense that quickly in the past. That hasn’t been the case, since then. The Eagles passing offense is struggling against the Birds defense. The only passes that Hurts is completing consistently are throws to A.J. Brown on short crossing routes and short out routes.

Right now the Birds have a passing attack that must lean on their running game. I rarely see effective pass plays from the Birds, where Hurts drops back and connects with one of the wide receivers on a downfield throw. Far too many times, you see Hurts holding onto the football.

One of the causes of the Birds passing game struggles may be the absence of talented left tackle Jordan Mailata, who suffered a concussion earlier in the week. His backup Andre Dilliard has also been out, so Hurts is being protected by offensive linemen, who won’t even be on team, when the season starts.

The most effective pass plays that I’ve seen from the Birds has been with Pro Bowl wide receiver A.J. Brown on the move before or after the snap of the ball. He has been catching the ball on crossing routes, out routes and stop routes out wide. It’s going to be difficult for teams to stop these plays because the defense must honor the run fakes, especially with the Eagles dominating offensive line. The Birds should be able to run the ball on any defense with that line and the explosive running of Miles Sanders, Boston Scott and Kenneth Gainwell.

Tight end Dallas Goedert has been having a very good camp. He’s a truly a complete tight end because he’s not only an outstanding receiver, he’s also a very good run blocker. Like Brown, Goedert is going to be difficult for defenses to stop because the linebackers will have to honor run fakes and that will give Goedert the opportunity to release and get downfield.

Last year’s number one pick, Heisman Trophy winner DaVonta Smith has been sidelined the last couple of days because of a groin injury. Smith can’t be happy about how much he’s seeing the football in this camp. Hopefully it will change when the season starts, but right now I think Smith is paying the price more than any other Eagles receiver with the passing game struggling.

I think head coach Nick Sirriani, a former wide receiver coach, wants to throw the football deep down inside, but he must do what fits his talent. see hertz dropping back and completing passes just out of the spread formation right now looks like this Eagles offense is going to have to rely on their running game and I don’t see the passing game the consistency is not there yet just don’t see that there this is after you know about seven practices and hurts is holding onto the ball he’s not getting it out I think the Eagles defense is giving them all they can handle

Even though the struggles of the offense isn’t good news, I think this could be telling us that the Eagles could have a very good defense. They’ve added pass rushing linebacker Haason Riddick, multitalented linebacker Kyzir White, number one draft pick defensive tackle Jordan Davis and talented third round draft pick, linebacker Nakobe Dean. Their most effective addition may be former Pro Bowl cornerback, James Blackberry who is the ultimate professional. He’s smart and skilled with great size and he competes on every down. You’ve got Blackberry on one side of the Birds defense and Darius Slay, another Pro Bowl corner on the other side. Slay has been getting his hands on quite a few passes during the training camp. I think when you add Avonte Maddox as the slot corner, you have a trio of cornerbacks that will rival any group in the league. This trio and their teammates have been locking down the Birds offense.

In the long run, Hurts and the Eagles wide receivers have the time, but they will need to step up their game for the Birds to get to where they want to be.

Jalen Hurts and The First Drive