Jalen Hurts and The First Drive 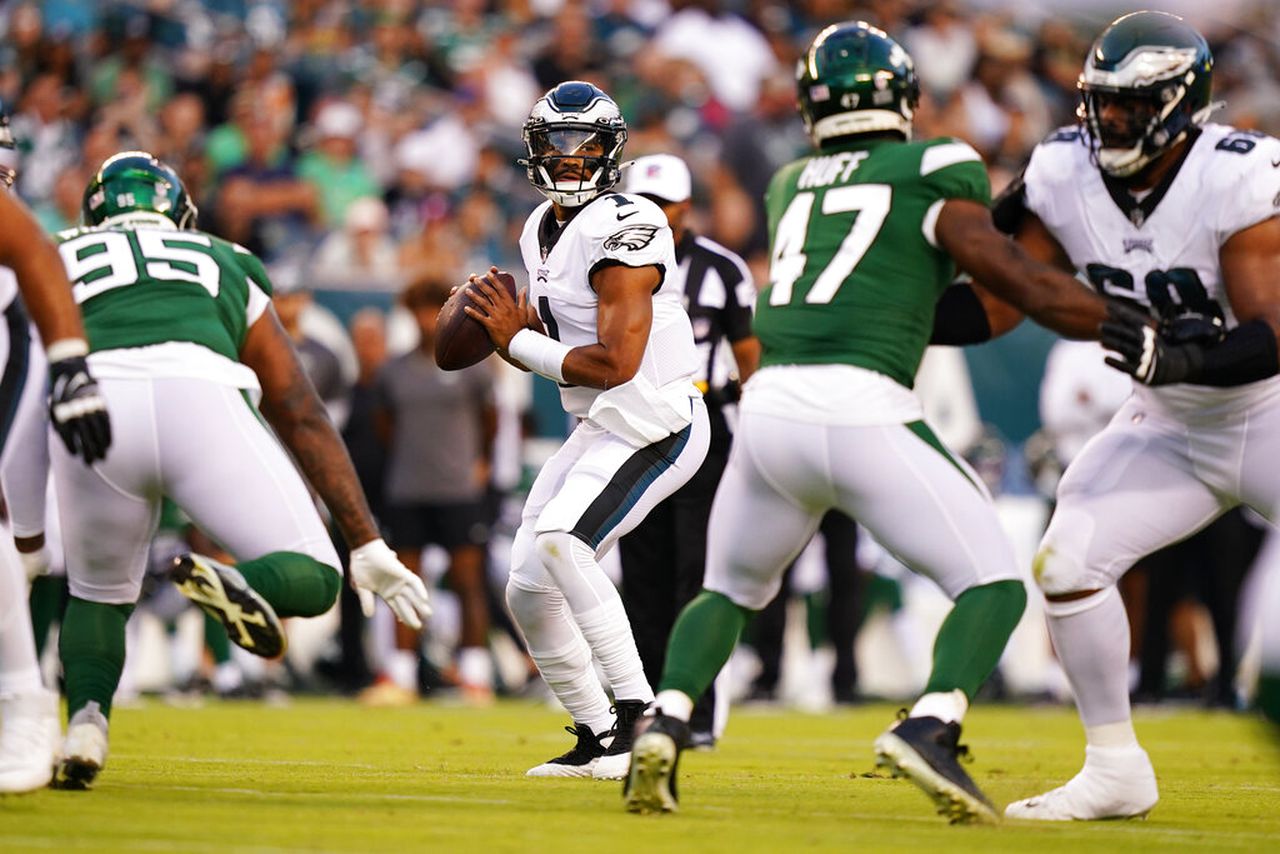 Eagles quarterback Jalen Hurts had an outstanding game on Friday night against the New York Jets.  Head coach Nick Sirianni wanted to help build confidence in Hurts and the passing offense, so the Birds only called passing plays on the first drive. Hurts went six for six

He started things off with maybe his best throw of the night.  He dropped into the pocket and felt some pressure from his left side, so he rolled to his right, which is his strong side. He looked downfield and fired a strike to Quez Watkins, who was very close to the sideline.  Watkins did a great job of catching the football and getting his feet in bounds.  It was a 28 yard strike by Hurts and I applaud him for that.   There was an easier and shorter throw to Jalen Reagor, but Hurts chose to go downfield to Watkins and threw a strike.

The thing that I’m most pleased about with Hurts on that play was the fact that he kept his eyes downfield.  He didn’t just scramble to run, he rolled with the intent of throwing the football.  He could have run and gotten some good yardage before going out of bounds, but instead he rolled with the intention of throwing.  That’s a big step for Hurts.  Running quarterbacks don’t stay healthy.  Staying healthy is one of the jobs of the starting quarterback.  Ask Cam Newton if you can run the ball consistently at the quarterback position in the NFL and stay healthy.

I was most pleased by the second play where he threw the check down to Miles Sanders.  This is something that the young quarterback can continue to take and it will make the game much easier for him and for the rest of the Eagles offense.  If he will take the check downs to the running backs, it’s going to eventually force the linebackers and the rest of the defenders to move up and try to take away those short throws.  When they try to take away the check down, everything else opens up in in the pass offense.  The curl route is going to start opening up.   The slant and the trail routes will open up for Hurts and company.  Opposing linebackers and safeties will start biting up on those check down routes.

The greatest quarterbacks who have ever played the game, people like Joe Montana and Tom Brady have never apologized for throwing check downs.  That’s one aspect of the game that Hurts has got to realize.  Take what the defense gives him.  He doesn’t need to be greedy because if he will be patient, he’s going to see everything open up.

Wide receiver Jalen Reagor did a great job of screening off one of the defenders and it allowed Sanders to go down the sideline for four additional yards, which made the gain eight yards rather four.  If Sanders can continue to catch the football the way he did on Friday, it’s going to make this offense very consistent and effective.   The pass to Sanders is going to be something they’ll be able to do all season long.   It’s a pass that they can complete nearly 90% of the time, so it’s something that they can consistently rely on.

On the third play he had a short connection with tight end Jack Stahl.  It was a connection over the middle for short yardage.  It’s going to be there all season long because defenders are thinking about A.J. Brown, DaVonte Smith and Watkins.  These short completions will keep the Birds offense in good down and distance situations.  It puts tremendous pressure on the defense because the Eagles don’t have to go that far to get a first down, so they can run or pass.  This makes the job of the offensive linemen much easier because the defensive line can’t just come flying off the line of scrimmage as pass rushers because they don’t know whether it’s going to be a run or a pass.

On the fourth play, Hurts connected with Watkins on a crossing route it was a good route until he caught the football and starting east and west rather north and south.  Watkins doesn’t seem to like the contact part of the game.  He’s got catch the football then put his foot into the ground and start running forward.  When he caught the football, he had a seven yard gain, but when he was tackled the gain was for only four yards.  He doesn’t need to run over anybody, just get low and head north and south, but you can’t run backwards and lose yardage.

This is a throw that’s going to be there all season long because defenses are going to play zone coverage on first and second downs because they respect the Eagles running game.  A defense can stop the run better in zone coverages as compared to man-to-man coverages.  In man-to-man coverages, defenders must key the offensive player that they’re supposed to cover and that prevents them from focusing on stopping the run.

On the third down play, Hurts dropped into the pocket and looked downfield. He didn’t see anybody open and felt some pressure inside from the New York pass rush, so he rolled to his right. Number one continued looking downfield and eventually decided to run with the football. He decided to head out of bounds and was hit in the chin by Jets linebacker Quincy Williams. This is why I want to see Hurts run the football less not more. He’s not going to stay healthy by scrambling and running with the football.

On the firs down play, which wound up being called back because of a penalty, Hurts dropped into the pocket, looked downfield, then scrambled for a touchdown.  I thought it was the worst play of the game for the young quarterback.  When he dropped into the pocket, he had a wide open A.J. Brown running a crossing route.  Hurts should have thrown him the football and let Brown get the first down and possibly a touchdown.  Instead Hurts held onto the football and scrambled.

Unfortunately, Eagles left tackle Jordan Mailata was called for holding on the play, so the Hurts touchdown run was called back, but it still was a bad decision by Hurts.

On the next play, the Eagles ran a nice flood route against the Jets secondary.  It was a nice clearing route by A.J. Brown, who came in motion from the other side, then ran a route which really cleared the area out for tight end Dallas Goedert.  The big tight end caught the pass and did a backward flip in to the end zone over a couple of New York defenders.  The Jets defensive backs and linebackers didn’t make an adjustment when Brown came over to their side, so they deepened to cover Brown and left Goedert wide open for the catch and score.

I thought the Eagles really came into the game intent on throwing the football against the Jets.  It was a great confidence booster for Hurts and his receivers.  New York was playing simple zone coverages and the Eagles were running routes to flood the zones.  Hurts did a good job of taking what the defense gives him.  For the most part, he made quick, correct decisions and threw accurate passes.  If he will do that during the season, the Birds will be a very difficult team to beat.

Eagles Cutting Down To 53