This Eagles Offense Could Be Special!!! 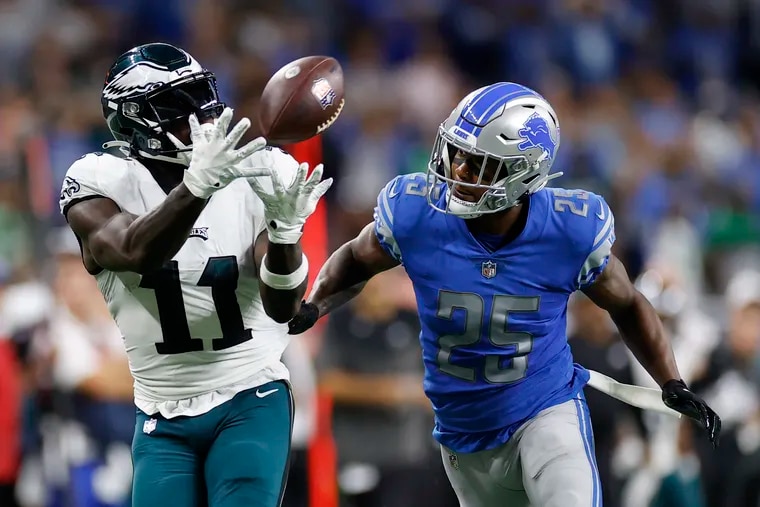 I take my hat off to the Eagles offense for scoring 31 points despite Detroit taking them out of their offensive flow.  Most of the time, if you score 31 points you’re going to win.  The Lions defense really came after the Eagles offense with blitzes.  They ran numerous zero blitzes, which are all out blitzes and susceptible to big plays.   They did it numerous times and the Birds must make teams pay when they send the entire house after the quarterback.

They knew they could not stop the Eagles, if they just played regular defense, so they came after them.   The legs of Jalen Hurts negated all the pressure and it saved the Birds.  It’s on tape and other teams are going to revert to the same thing, because the Eagles have weapons that are very difficult to stop.

A.J. Brown is a monster.  He is definitely a very special weapon and he exerted his will against the Lions and they didn’t have anybody that could cover him. Detroit’s defensive backs really didn’t want to tackle him.  He has definitely taken the Eagles offense up to another level.  That’s why they might get a tremendous amount of blitzing and defenses trying to do something out of the ordinary in order to take the Eagles out of their rhythm because Brown, DaVante Smith, Dallas Goedert, Quez Watkins, Miles Sanders and etc. are probably too many weapons for a team to be able to defense.

I think the Lions defensive coaches did the Birds a favor by showing them all these blitzes. The Eagles offense had better be ready for teams to do something unusual.  These teams know that they’ve got to try to find a way to take them out of rhythm, because the Eagles offense presents some major challenges for any defense. Think about it. They didn’t get Smith involved and Goedert caught only three passes. Quez Watkins didn’t catch any passes. Teams are going to be forced to blitz the Eagles and that’s going to give them the chance to have many big plays if they read it and execute properly.

I saw something in Jalen, that’s really admirable.  He started off the game 0 for 5, but there was no panic.   He wound up having a very good game throwing the football.  He had to throw away four or five passes, but he still wound up having a good game throwing the football despite starting out 0 for 5.  That’s the type of poise that you have to take your hat off to Hurts for.  He preaches not letting early plays ruin your thinking. He preaches Focus on NOW to his teammates then he demonstrates it. The guy is a serious leader.  He might not be the best quarterback in the NFL, but he’s one of the best leaders because these guys believe in him.  He doesn’t just talk.  Whatever he asks of the other guys to do, he’s already shown them that he’s willing to do it.   That’s the qualities of a TRUE leader.

I don’t like the fact that he ran so much.  I don’t think that you can stay healthy if you’re running the ball that much, but he does a great job of protecting himself and getting on the ground.  Head Coach Nick Sirianni needs to get out there and be very loud about protecting him because they hit him late numerous times. The quarterback is supposed to be protected.  The quarterbacks that just stay in the pocket all the time are protected more than guys who have running plays called for them.  Sirianni‘s got to be very strong in making sure sure that he protects Hurts and lets the officials know before each game.

Going forward, Hurts and the Eagles are going to need to get the play in quicker, get up to the line, recognize blitz and get that ball out of Hurts’ hands to receivers. We don’t want him running the ball that much.

They’ve also got to get the ball to Smith.  Brown is clearly their best receiver.  He’s a great weapon and everything but you’re still going to need Smith to make plays.  In this upcoming game, they got to get the ball to Devonta Smith. They’ve got to work him into the game plan and they need to make it a point to get him the ball. Smith is one of those type of driven athletes. He doesn’t say anything but he wants to be the best. I’m sure it was a long ride on the plane back home for him. Keep him happy. Get this man the football.

Sanders had an outstanding game.  That was a great run to put the victory on ice.  He’s got all kinds of talent.  They’ve just got to keep him healthy and keep him rolling along.  He needs to touch the ball about 20 times a game. He should get 15 to 18 runs and three or four receptions.

I saw Lane Johnson dominating and taking names.  The Eagles offensive line didn’t have their best game, but they still exerted their will and it’s going to get better going forward.  These guys are for real.  The line and the rest of the offense has some things to correct.  They’ve got to eliminate the penalties by calling the play sooner and getting lined up properly.  They need to do a better job of dealing with the noise, as well.

This offense can play much better. Think about it. They scored 31 points, but didn’t play close to their best football. They have an abundance of talent on this crew. As I said, this offense could be special. The weapons are there.

Will Jalen Survive This Season?