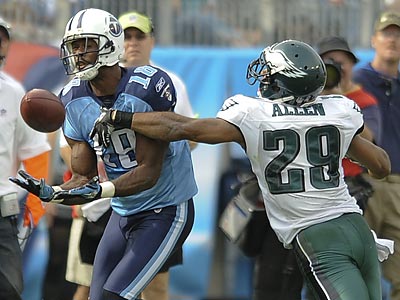 The 75th Annual NFL Draft has come and gone.¬† When I look at how the Philadelphia Eagles approached, I keep repeating the number thirteen.¬† If one-third of the their draft picks don‚Äôt make the final roster, eight rookies is still a lot of young talent.

The fact that Philly drafted this many players is no surprise to me. With the limitations on free agency this uncapped year, it was important to approach the draft in a ‚Äòpre-1993‚Äô manner (the NFL Draft had 12 rounds before the collective bargaining agreement was in place).

It‚Äôs also no surprise that the Eagles put a huge emphasis on acquiring defensive talent.¬† With the 2009 draft focused on offense and the way they ended the season in Dallas, coach Andy Reid and GM Howie Roseman had to address this side of the ball.

Looking at the Eagles 13 draft picks, here are my thoughts and predictions on each individual.

I never was a fan of the Eagles‚Äô drafting Texas safety Earl Thomas.¬† I wanted the Eagles to get the best possible pass rusher in the 1st round.¬† I thought for certain that they would grab Georgia Tech DE Derrick Morgan, but Reid strongly stated this was the guy he coveted most.¬† The more I read about Graham and watch his highlights, the more I feel the Eagles made the right selection.

As far as safeties were concerned, this is the guy I wanted all along.¬† I didn‚Äôt think there was any chance of the Eagles drafting Tennessee‚Äôs Eric Berry.¬† Allen‚Äôs size and scouting report made me think he‚Äôs a very good fit for this defense.

There were reports that the Eagles were interested in Te‚Äôo-Nesheim, but I think taking him in the third was a bit of a reach.¬† I, like many others, thought the Eagles would‚Äôve selected a cornerback in the third.

I‚Äôm not a fan of this pick, but I understand why the Eagles chose him. Lindley‚Äôs known as a good cover corner. A more physical Brandon Ghee (Wake Forest) was available in the 3rd round and a versatile Akwasi Owusu-Ansah was still available.¬† The Eagles are more concerned about their corners creating turnovers than tackles.

2009 Prediction: At best he‚Äôll play in dime packages.¬† It‚Äôll be a year or two before he starts.

Another huge reach in my opinion.¬† One thing‚Äôs certain.¬† The Eagles are suddenly deep at weakside linebacker.

I thought the Eagles would‚Äôve selected John Skelton (Fordham) or Jonathan Crompton (Tennessee) as Kevin Kolb‚Äôs future backup.¬† After looking at some brief clips, it looks like Kafka is a good fit for the Eagles‚Äô offense. Like Kolb, Kafka is the son of a football coach.

While Brent Celek continues to develop into a premier tight end, Cornelius Ingram is rehabbing his ACL in order to be his speedy backup.¬† Harbor will be given the chance to be the Eagle‚Äôs blocking solution at TE.

This is the steal of the draft for Philly.¬† At one point, Sapp was given a first round grade.¬† While listed as a defensive end, I think the Eagles are going to give Sapp every chance to become a SAM linebacker.

The Eagles spent a lot of their time scouting wide receivers 6‚Äô3‚Äù or taller.¬† If Cooper proves he can play special teams, he could very well make Hank Baskett‚Äôs second stint a brief one.

Outside of Scott being considered a 2nd-3rd round prospect that slipped, I‚Äôm having a hard time understanding this selection.¬† I‚Äôve always wanted the Eagles to keep a bigger halfback on the roster.¬† Not known to be a big part of the passing game, I‚Äôm curious to how Scott will be used.

I like this selection, especially after last year‚Äôs disaster at middle linebacker.¬† Chaney will challenge Joe Mays and Omar Gaither to provide depth behind Stewart Bradley.

This isn‚Äôt the Georgia defensive tackle I expected the Eagles to take (Geno Atkins was taken by Cincinnati right before the Eagles in the 4th round).¬† Owens could be another steal.¬† If he can prove he can rush the passer, Trevor Laws might have a hard time staying on the team.

The Eagles final draft pick is already known for his special teams play.¬† If he proves he can play safety (or possibly corner), Quintin Demps could be in danger of being cut.¬† If Demps takes the competition seriously, Coleman will probably be placed on the practice squad.

In all honesty, I was pleased overall with the Eagles‚Äô draft picks.¬† They rarely selected the player I wanted them to, but that‚Äôs why as a fan you should never become enamored with the names that ‚Äòexperts‚Äô deem are future Pro-Bowlers

What I liked the most is that each draft pick is a player with a good chance to make the team.¬† The Eagles didn‚Äôt select any experiments like they have in the past.

Now, Reid and Roseman have to locate some undrafted talent.

Come over to PJ Whelihans at 7pm tongight to go back over what the Eagles did in the draft.

My Draft Grade For The Philadelphia Eagles Is A B-

Tony Hunt surfaces with the Giants