Guards, Centers And Tackles Who Will Get The Eagles Attention 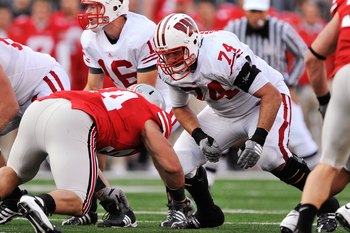 I’m sure Andy Reid, Howie Roseman and their staff was especially attentive to the work of the offensive line today. The Birds need help in the interior of their offensive line and they need it badly. They were looking at the centers, guards and tackles who might do a good after being moved inside to play offensive guard.

I have separated Mike Pouncey and Stefan Wisniewski from this group because those guys won’t be on the chart very long. Pouncey is a no brainer for the Birds. If they get the chance to get him they should pull the trigger if he’s still on the board at 23.

They would be upgrading the interior of their offensive line if they were able to get Pouncey with the first pick. I doubt that he’ll be there because NFL player personnel people loved to have tremendous confidence that the guy they grab in the first round can play. It’s hard to have more confidence in a guy than the fact that his twin brother came out the year before and was a Pro Bowler.

Wisniewski should looked on in similar light because he also has the bloodlines with his father, Leo playing in the league for four years and his uncle Steve, being a Pro Bowler for almost a decade. A team that wants to upgrade their center position would have no problem justifying grabbing this young man.

Center Ryan Bartholomew of Syracuse was the most impressive athlete of the interior lineman testing this morning. He was the fastest in his forty time, 4.89. His ten yard split was 1.63. On top of that he lifted 225 pounds more times,34, than any other offensive lineman. Ryan’s maximum bench press was 585, which is rather amazing.

This shows he has the raw potential to possibly become a good NFL center, so the scouts will go back and tell a look at him to see if

he’s got some promise to be a producer in the NFL.

Teams would be more apt to get their center moving if they had an athlete like Bartholomew playing the position. He wasn’t rated very high amongst the centers, so I don’t think these tests will help him a great deal.

Clint Boling of Georgia is a big physical guard who showed that he does move well enough to play on the next level. He ran a 5.30 in the forty yard dash. More importantly his 10 yard split was 1.66, which shows he can get out of his stance with some explosiveness.

Athleticism isn’t his strength, but Boling is surprisingly light on his feet. He’s quick enough and able to change directions well enough to get the job done. Boling is a mauler is capable of moving some of the big defensive tackles off the ball.

Boling is as strong as an ox and he can play both guard and tackle. Great strength and intensity as both a run and pass blocker. He was able to bench press 225 pounds 28 times and you can see it in his play. I like the way he moved in the mirror drill and showed good body control.

Marcus Cannon from TCU is 358 pounds but shows the ability to move very well. He played tackle at TCU but will likely play the guard position in the NFL. The young man has tremendous power in his lower body and could develop into an outstanding power blocker. He belongs with a running team who will give him the chance to blow people off the ball.

He ran 5.26 in the forty yard dash is able to carry the 358 pounds although the team which drafts him will likely ask him to lose some weight. I would like to see him improve his ten yard split which was 1.78. He moved well in the mirror drill and showed he can move laterally

Rodney Houston is a very good guard out of Florida State, who was thought to be too small for the big boys in the NFL but he’s up to

299 from 282 and he showed today that he can carry that weight. Hudson ran a 5.2 in the forty-yard dash and excelled in the movement drills at the increased weight. He showed very quick feet and body control.

He showed great strength by throwing up 225, 33 times. His short arm length which is about 32″ could make him a center at the NFL level.

I’m very high on Alabama’s James Carpenter, who played offensive tackle for them but has the ability to play either guard or tackle. He’s a very good athlete who turned some heads at the Senior Bowl with his quick feet combined with his size and strength. The fact that he could play either tackle position while also being big, strong and aggressive enough to move inside, I think he would be a great addition to the Birds offensive line.

He excelled in the agility part of the workout at 315 pounds. He arm length is about 35′ which is above average.

Danny Watkins from Baylor is 27 years old. He’s a Canadian who has only played 4 years of football. The big guy played tackle at Baylor but he’s probably going to be a guard in the NFL. The young man is very aggressive, which will help him in his run blocking. His strength is very good, as he did 29 reps of the 225 lbs. bar.

He’s not the best athlete but he finds a way to get the job done in the passing game and when asked to get to the second level on running plays. Watkins would be an upgrade over what the Birds have right now at the right guard position. His age might be cause them to look elsewhere but they’ll likely be able to get him in the second or third rounds.

John Moffitt he’s hard worker who is a fighter. He’s very strong at the point of attack and will maul a defensive tackle then dominate

him. Will be best in a situation with a team that likes to run the football. He was very slow in his forty yard time of 5.52, but he moved much better in the mirror and lateral drills, so he’ll be fine working in the box where the offfensive linemen have to do most of their work.

You might not want to have him pulling or working out in space because he’s an inside fighter who would help the running game and do a good job as a pass blocker. Moffitt has a mean streak which will help him in the all-out NFL wars.

Local product Will Rackley of Lehigh University wowed the scouts at the East-West Shrine game this year. He could develop into a dominating guard or tackle. Yes he has the versatility to play both positions and is a very good athlete to be well over 300 pounds. He moved very well in the agility part of the workout and showed good strength as well.

If the young man is on the board in the third round he would be a steal, but he might not be there.

The Bloodlines Make Mike Pouncey A No-Brainer For The Birds

pouncey or wisniewski, go with the family genes.
im tired of all the misses, and trade up or trade kolb for another 1st for mathews
word is kafka is a genius so ill take my chances and sign a vet qb as well
sign asomugha to top it off and call it an offseason, were ready for games

Could somebody put up combine workouts for our current offensive linemen, that would be a great comparison to look at.