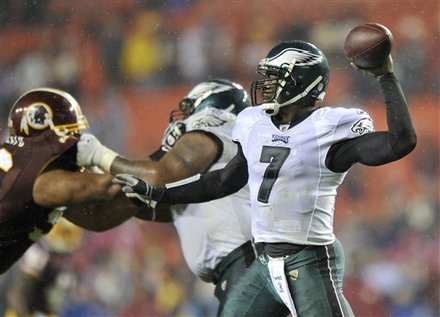 While the NFL owners and the players union continue to negotiate a new Collective Bargaining Agreement (CBA) behind closed doors, teams around the league are restructuring their rosters.

In Philadelphia, the Eagles have made more moves with their coaching staff than anything else this off season. As usual, Andy Reid and Co keep their plans concealed and rightfully so.

Outside of a few players signed, the roster is the same as it was when the season ended. Quite a few players are schedule to be free

agents when that time begins, but nobody has been released as of yet.

There are bound to be changes of course when they are permissible. How will the Eagles address their roster? Starting with the quarterback position, this is a good time to take a closer look.

This time last year, everyone knew there would be changes to the Eagles QB lineup. I don’t think anyone anticipate what took place in 2010.

The debate was should the Eagles continue with Donovan McNabb or move on to the Kevin Kolb era. The answer ended up being none of the above.

I’ll be the first to admit when I’m wrong. When the Eagles first signed Vick to a two year contract, I thought there was no way he’d be in midnight green for the second season.

Not only did Vick stay on the roster, he took over for Kevin Kolb in the first game of the 2010 season and never looked back.

In addition to regaining the athletic ability he showcased as an Atlanta Falcon, Vick became an even more dangerous threat by working to be a better QB. In 12 games he posted career bests in passing yards, touchdowns and QB rating.

The result was a Comeback Player of the Year Award, contention for league MVP and the Eagles winning the NFC East division.

The Eagles knew they couldn’t afford to lose Vick and wisely placed the franchise tag on him. A long term deal can’t be offered until a

new CBA is in place. Once it is, look for Philly to keep Vick around for 3-4 more years.

2010 was supposed to be the beginning of the Kolb era. It was the moment he prepared for since childhood. Unfortunately, injuries are a huge part of football.

In the first half of the Eagles season opener against the Green Bay Packers, Kolb suffered a concussion. This moment ushered in Vick and the rest is history.

Before his injury, however, Kolb was obviously going through growing pains. He seemed very tentative and didn’t show any trust in the offensive line (Can’t blame him for that).

When Reid announced McNabb’s trade and named Kolb the starter, I didn’t expect the transition to be smooth. He still has to go through his bumps and bruise but I’m not ready to label him as a bum or career backup.

That said, Kolb can forget about being a full time starter in Philadelphia. No matter how good he gets, he’s not going to be able to have the impact Vick has. That goes for every other QB in the league of course.

Kolb wants to start somewhere. Unfortunately, because players can’t be traded with a CBA his future and happiness depends on the negotiations

Outside the NovaCare Complex, the Northwestern product is an unknown at this point. Eagles General Manager Howie Roseman has raved about Kafka’s ability to learn the offense at such a quick rate.

The biggest question regarding Kafka at this point is do the Eagles view him as a No. 2 QB if Kolb were to be traded.

The CBA talks have a huge influence on the Eagles QB situation due to Kolb’s currently high trade value.

If a deal is somehow reached before the NFL draft, Kolb is as good as gone. How comfortable Reid is with Kafka at this point will determine whether the Eagles will pursue a veteran backup or draft another QB in the later rounds.

Reid’s confidence in developing QBs is sky high right now. Don’t be surprised if he considers bringing in a former starter like Tavaris Jackson (Minnesota) or Alex Smith (San Francisco) to help them revive their careers.

If the draft takes place before a new CBA, the Eagles will enter the 2011 season with the three names listed above as their signal callers.

I think Alex Smith can be a solid #2…….. But the only question is he damaged goods????? He’s been in the league for 6 years and has been under 5 different offensive schemes throughout his career…… He shows a ton of up-side and is great within the redzone…… He’s still young and can learn a lot from the eagles…….. Tavaris Jackson is a guy who i believe lacks self esteem……. I believe his whole stint with minnesota and the Brett Favre saga just tarnished his trust towards the NFL…….. If you ask me I believe he was the one who said he hates Brad Childress LOL!!!! Just my personal thought’s…. But with Reid and Childress being BESTIE’s i dont think Reid will take Jackson as a back-up………

I might sound stupid for saying this but the Eagles did a big thing by signing vick during his prison release but do anyone here thinks that the Eagles can sign Plexico Burress????? I mean with him and Vick being from VA and Vick can mentor him…… ANd also he’s been The eagles KILLER throughout his career………. Perhaps sign him to a year deal to see what he has to offer????

If Kolb gets traded, I would like to see QB’s Troy Smith, Shaun Hill and even a Matt Moore come in as a short-term back-up until Kafka gets fully up to speed

To Jroc757
Interesting to see if Eagles would pursue a PLaxico Burress who has been a thorn in the Eagles side for years.. The Eagles obviously took a chance on VIck which has turned out great.. I am not so sure they would be willing to roll the dice again on Burress, I really see Plaxico ending up on the Patriots or Redskins who both teams needs a legitimate big target receiver. The Eagles could use a big target too, but probably think R Cooper is their answer for that..

Let’s bring in Demarcus Russel and see if he can be revived.
He’s young, tall, with a very strong arm …and have athletic ability.

That would be another number #1 pick revived with raw tools revived. A steal.

1) Marc Bulger…….. Has about 3 years left in him……
2) Kerry Collins…… Old but still has it……. The Clint Eastwood of the NFL LOL!
3) Drew Stanton…… Good back-up, great arm, and has been with a organization that has been terrible for years….. But a winning franchise can mak this kid better….
4) Billy Volek…… Been a great back-up in Tennessee and also with the Chargers but never got the chance to be the lead actor….. He’s a guy who the Eagles can have a eye on….
5) Bruce Gradkoski…… Made a great statement to be a starter in the NFL and should be #1 on this list but he’s injury prone…… He’ll receive a big pay-check elsewhere but not in Philly…..
6) Jim Sorgi……. The only reason why I have him at six is because Howard Mudd has seen this guy and perhaps he has some knowledge of what he has to offer…..
7) Luke McCown…… Very fast and has a decent arm…… He’s also injury prone but he’s a solid veteran who can move the ball and be effective with his feet at times……
8) Tyler Thingpen…… Young kid but has been a veteran who had some starts…… Looked ok but within the Dolphin’s system which doesn’t ask much for qb’s to be clutch…….. It’s more of a run game system and Qb’s just to not turn the ball over system LOL……. (If that sounds right) Trent Dilfer anyone?????
9) Senaca Wallace……. Has some up-side on him….. A mobile qb who can be a #2 but not for Philly…… He’ll fit more within the dolphin’s system…..
10)Chad Pennington……. I call him the TIM WAKEFIELD of the NFL…. LOL…. He throws knucle balls/lob passes and doesn’t put enough zip on a pass…… Plus he’s injury prone and I believe he should retire…..
11) Rex Grossman……. Gun Slinger who has issues with reading defenses….. He did ok last year with the redskins and I believe he will return as starter for them this coming season if we have one…..
12) Kellen Clemons…… Tall kid who just didnt get a chance to be the guy for the jets…… Due to the Sanchez high and the Jets moving forward with him which was a great move….. He’s a kid who has some football in him to make some noise as a backup!!!
13) Troy Smith……. He’s been bounced around and like Rodney Dangerfield always said……. “I dont get no respect”!!! LOL!!! He’s good but lacks judgement at times…..
14) Matt Moore…… Terrified!!!!!!! Need I say more….. That kid was killed last season…..
15) Trent Edwards…… Under the Matt Moore code as well…… Did great his rookie season in Buffalo but just has declined throughout the years….. But what came out of Buffalo that was good in recent years???? Marshawn Lynch…..
16) Dennis Dixon……. He’s too small but will fit in a wild-cat offense to take a few snaps…… Someone like the Jets will benefit from his services……

@paulman….. I high off cooper aswell……. I think he’ll do better this year and will have Avant on his heels to become the 3rd Wr……. I think where ok at Wr…. But this is Plexico Burress here…….. The guy has killed us///// Excuse me Murdered us first 48 style for years and part of our success on beating the giants as of late is because of him shooting himself……

Seneca Wallace just signed a 4 year Deal with Cleveland last week so he will be their #2 QB behind Colt McCoy.. You can put Jake the snake Delhomme on your list in his place .. Good Grief..
Rex Grossman is penciled in as the #1 Starter in Washington, so you may want to pu McNabb on your list instead.. (Double Good Grief)
M Bulger having 3 years left is a real stretch.. maybe 1 or 2 at most..