Iguodala Had Excuse For Missing Exit Interview, But….. 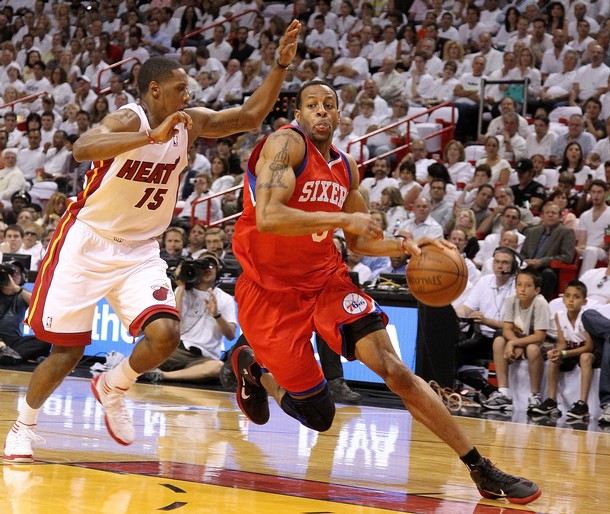 Sixers forward Andre Iguodala was a no-show for yesterday’s one on one exit interview with Sixers head coach Doug Collins. Iguodala was present for the final team meeting and made himself available to the media.

According to team President Rod Thorn there isn’t an issue here. “He had a doctor’s appointment…We did not know he wasn’t coming, but it’s not a big deal.”

Following the Sixers season-ending loss to the Miami Heat on Wednesday Iguodala dodged the question of whether or not he would be in a 76ers uniform next season by responding that, “He planned on playing in the NBA.” In speaking with reporters yesterday Iguodala stated that he never said that he did not want to play in Philadelphia. And finally when speaking with team beat writer Dei Lynam Iguodala said that he just wants to contend for a championship when asked if he hoped to be a Sixer next season.

Trading Iguodala is alot harder than it sounds, he is currently owed $43 million over the next three seasons and unless the Sixers eat a ton of that in trading him or get marginal value in return he’ll be here for another full season at least.

Why is he pouting when Collins has bent over backwards to stroke his ego? He takes the ball out of Jrue Holiday’s hands and entrusts him (Iguodala) to run the offense, only to have it always end on a poorly executed jumpshot that always seems rushed.

According to Collins, when victory or defeat hangs in the balance the team’s fortune or misfortune will rest on the decision making of Iguodala, regardless of who the hot hand is at the time. (see losses to Utah and Sacramento)

Why Did The Age-Obsessed Eagles Draft A 26 Year-Old Player?