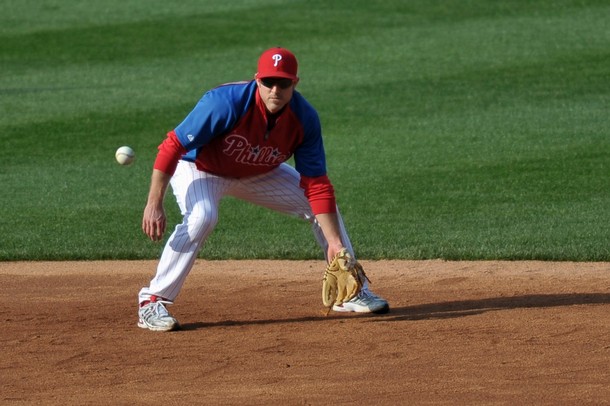 For those who don’t know, the current Disabled List for the Philadelphia Phillies is getting pretty crowded — almost enough players to field a basketball team and on the list: Chase Utley, Jose Contreras, Brad Lidge, J.C. Romero, Domonic Brown, Brian Bocock and Joe Blanton (the most recent visitor to the DL.)

That’s seven players who are currently being paid to get healthy.

It’s not like the Phillies are the only team to battle injuries, but not many teams are struck with the injury bug this early and severe in a season. It’s become a weekly headline now: Phillies Add Another to the DL.

This is a trying time, but the fact that the Phils are sitting atop the division, allows us to downplay the injuries. The Phils are showing what they’re made of. Regardless of who goes down, there’s no crying about because whichever player takes their place, knows they have to step up.

This team knows what is expected of them. It’s World Series or bust for this squad and there’s no escaping that.

I like it that Charlie Manuel doesn’t believe in babying guys. He’s got a soft touch, but he knows when to push. Manuel knows his team knows what it takes to win.

Luckily, the injuries haven’t affected the team too much as the reserves have stepped up.

Antonio Bastardo and Michael Stutes have played key roles in the bullpen, as well as Ryan Madson, and all three have helped to alleviate the loss of Lidge, Romero and Contreras.

Vance Worley will get another shot in the Major Leagues after just missing out on making the opening day roster this offseason. He will take the mound tonight against the Mets. There shouldn’t be too much pressure on him because he’s in a rotation that has four All-Star pitchers and is filling in for a pitcher that tends to give up runs early (and sometimes often) in games.

In place of Brown, Ben Francisco has played well at times, especially early on when he was consistently knocking in runs. He’s slowed down a bit of late, though, batting .292 with 6 RBI’s and 7 hits.

The one loss that has affected the Phillies, and more specifically their lineup, the most is Utley’s absence. Without him, the Phillies have been very streaky and have missed his RBI’s. Wilson Valdez has come through at the plate at times and he’s been solid in the field, but he will never be able to duplicate the numbers of Utley, at least in the power department.

It’s difficult to overcome the injuries, but for the most part, the Phillies have fared well during these times. As of now, the Phils are 16-8 and sit atop the NL East (.5 games ahead of the Marlins entering Friday.)

Hopefully they can stay atop the division while they’re banged up. Once they start getting players back, look out.