Charlie Manuel Is Looking For Hitters To Improve Phillies Offense 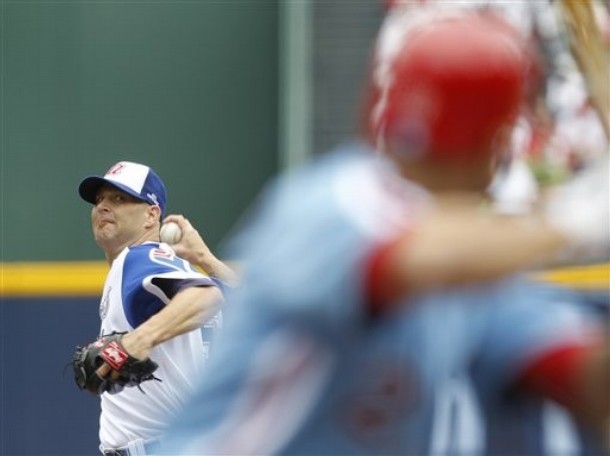 Phillies ace Roy Halladay gave up only three runs yesterday and that was too much because the Phils scored only two runs. Despite a complete game he picked up the 3-2 loss. The Phils have had trouble scoring runs this year and it’s bothering Phillies manager Charlie Manuel.

In the first 39 games of the season, the Phillies have scored 3 or fewer runs 20 times. Yes, that’s over 50% of the time and it’s not good enough. So Manuel didn’t have a problem with letting his ballclub know that he’s looking elsewhere for players who will get some hits.

“We’re gonna find some hitting. We’ll get somebody,” Manuel said after Sunday’s game. “We’ll find people. We’ll gawdamn look until we find somebody. Seriously. That’s how I look at it. We’ll keep experimenting until we get people.”

The two runs the Phils scored yesterday were supplied by outfielder John Mayberry, who hit a two-run homer. Manuel singled out Mayberry’s performance while saying that guys who produce will get more playing time, but guys who don’t produce will be replaced.

“He played good today. He stole a bag. He hit a homer. [Walked twice.] Made a helluva catch in rightfield,” Manuel said. “I’ve always had in my mind to get him some playing time. The better he does, the more playing time he’ll get. That’s what happened with Werth and Howard and Victorino. That’s how they became regulars for us. You play good enough, you can win a job. You can move anybody.”

Raul and martinez need to go. These guys have been hurting us all season. I think you need answers soon as to who is the legit starting lineup. Ben Fransico is not the answer to replacing werth. Here is what line up I think would make sense

Maybe Mayberry and Brown can hold it down until we can trade Blanton for a batin July.

Shane Vic cannot hit 5th. Utley will hit 3rd. there is no way they keep polonco there. and raul is hitting .400 for the last 2 and a half weeks. I think he will be fine. Just relax, the offense will come around.

martinez rarely plays and he cant be considered “hurting” us bc he gets no time….ibanez on the other hand is…its unfortunate that dom brown sprained his thumb, though he shoud be ok in 5-7 days, hopefully this doesnt slow his progression….he was having an outstanding early season both at the plate and in the field….in a perfect world, utley would come back during next weekends homestand or early next week…that would give browns hand about 10-13 days and heal and hopefully hed be ready by then, but they should bring both utley and brown up together and insert them both right into the starting lineup….put brown out in left for francisco and mayberry start in right for ibanez…the 3 of them starting and getting everyday playing time should certainly put some juice into this team and energizre these guys…you would then have a solid 2 months to really diagnose the situation and figure out if you do need to trade a pitcher (blanton worley) in order to get a bat….

The Phillies will suffer the same fate as last year if they don’t turn around their batting situation. If we didn’t know that at the beginning of the season, we know it now. I think it is logical to conclude that unfortunately we have seen enough of Raul and Francisco.

BRown is not ready for Prme-time, The guy has played very few meaningful games since last July after Werth returned to the Phils Line-up– Brown pinch-hitted down the stretch and that’s it.. He needs a lot of work on his Defense and on game situations in general.. They need a proven OF for this season, I would let Brown get his 4-5 At-Bats all Summer for AAA Lehigh and then call hi mup in Sept to see some action, but Brown has what 40 At-Bats over the last 10 months in real game situations.. He’s not the Answer for 2011..
I would like to Phils to pursue CF Adam Jones from the Orioles, He can hit,run,field,throw and he’s a 4 year vet already and only 25 Years Old and is just hitting his prime and would have ltos of upside being surrounded with better teammates
The Orioles needs some Pitching and young IF help it would probably take a PItchers like Worley or Kendrick, IF Martinez and a Prospect or 2 to get him..
Orioles would not be interested in a overpaid Joe Blanton, they need to get more younger talent with upside

I agree FS1960 which is what I have stated since Febaury and I did not like the look of this year’s line-up (even with a Utley) and have called this 2011 version
the “Phillies Lite” Team and I still stand by it….
Birdo-Beaman was predicting like 119 Winds by this punchless team that is averaging about 3 Runs per Game over the last few weeks and now that they are actually facing better teams with better pitching, we see the results and it’s just not a World Series worthy line-up.. ..Maybe Utley catches lightning in a bottle when he returns, but I am expecting average production from him at best since his body keeps breaking down and his overall production has been slipping the last 2 seasons anyway..