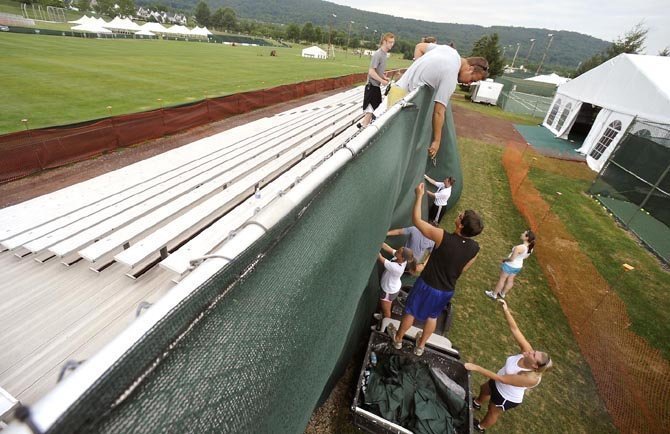 The Eagles and Lehigh University are still hopeful that they can have the team’s training camp in the Lehigh Valley this year. LehighValleyLive.com reported that the Eagles had contractors busy putting up tents and bleachers out at the university’s football practice fields late last week.

The lockout hasn’t ended but it’s on the verge of ending and the Birds want to be ready to have their training camp at Lehigh even though it may start later than it has in the past. Allowing Eagles fans to watch the team at Lehigh is the only way the team will be able to give their fans an opportunity to see the team practice. The Birds have promised South Philadelphians who live near the Nova Care Complex that they will never have events there where they invite the public to attend.

I believe the Lehigh workouts will be attended with tremendous enthusiasm because Eagles fans and NFL fans are starved for the game. Although the Phillies are popular and loved by Philly sports fans, Philadelphia is still a football town. I’m sure that Jeffrey Lurie, Joe Banner, and Andy Reid are anxious to show the city that they still have the more popular team.

In addition, free agency will be going strong and there will be many important moves made in a short period of time. NFL fans will have the time of their lives trying to follow all the signing and moves which will be made in the first 24 to 48 hours of free agency.

Hopefully, the lockout will end this week and the tents and bleachers the Eagles had put up at Lehigh will get some work.

CAN’T WAIT TO GET UP THERE AND SEE HOW MUCH WEIGHT FATHER ANDREW HAS GAINED. MAYBE HE CAN TAKE SOME LAPS. THE THREE WEASELS WON’T GIVE US WHAT WE NEED TO WIN A SB. I WISH THE OWNER WOULD SELL THE TEAM. I CAN’T GET MY HOPES UP WITH THE 3 WEASELS AND THE FAT PIG.

Why do you care how much he weighs? And how do you know what they’ll do in FA. They’ll be aggresive in my opinion. You can’t get your hopes up cause you wallow in negativity.

If settlement wasn’t done by this week, then there would be no Lehigh.. If this Holdout/Lockout went into August then it would have been held at NovaCare.
I also heard that Reno Mahe will be selling Gasoline for $2.00 A gallon just outside of Camp…

Mr. Cobb, why do you, other media types, Howard Eskin in particular and possibly the eagles management attempt to create a hierarchy of interest for the philadlephia sports fan, with subtle and not so subtle statements, as your article above demomstrates, that this is a football town? What is your point?Are you and the eagles that insanely jealous of the phillies success that you have to manipulate the fans interest. In fact, for many such as myself, there is no rooting order even if we enjoy one sport more than another.

Whats the over/under on how many days it takes for Asam to pull his hammy ?

No 2 a days , no live hitting and a bunch of walk thrus I’ll pass on TC this year

To Gotta
They will have 2 Pracitce sessions a day, but only 1 canbe in Pads..
Next off-season they will go from 15-18 Days ot OTA’s down to 9 Days of OTA’s and the Earliest teams can have OTA’s will be in May as opposed to March as in the past…

Jake, your right, they are jealous, & are always competing with the Phils. Although they’ll never admit it. I hate to break the news to the Gold standard, but the Phils took that mantle in 2008, & the Gold standard won’t take it back until, either they win a SB or Jabba the Hut is fired.
GO PHILS!
OK, what the hell,
GO BIRDS!

Dont see why the camp would be any different.Its starting on time. No ota’s shouldnt change the way the squad prepares for the season.

Paul…thanks Captain Obvious. Its always fun to tell you about your b.s. predictions and read your response. Wonder what your response to the Braves not winning the EAST will be? If they won more games then the Phills they woulda won it?HAHAHAHAHAHA!!

Erock – you’re on point today. I think it, and you post it.

Erock, low blow, 8 count. BWAHAHA!!!
BTW, Paul broke his magic 8 ball, that’s why his predictions have been off kilter, recently. He has resorted to darts & eenie, meenie, minie, moe.

Philly is a football town with a rich tradition of baseball. Nuff said.Give me a decade of baseball dominance or competitivness and ill say its a baseball town. I can remember delivering papers in the summer in the late 80’s and being only 8-10 years old…even then i knew they sucked big time. 4-5 years of getting it right with a Seires title aint bad. But not gonna overtake the Birds yet.

Phillies are currently the gold standard.. but Philadelphia is still a football town…

Erock The phillies have won their last 4 divisions you mention a decade of dominance and I ask you this.. As of now which team do you think will be more dominate in the next 5 years?

The Phillies have sold out 130 plus games thus far the biggest streak of any philly’s sports team including the eagles which is 80.

Walk downtown in center city how many red shirts do you see vs.green eagles jerseys?

I understand being an eagles fan is great hey, im an Eagles fan and while I dont like one more than the other its plain to see that the times have changed its a baseball town. Women alone out number the fans for the phillies than the men to the eagles.

I disagree,
Philly has become Soft and is a wussy Soccer town…

vr – do you think that red v. green ratio will continue when baseball season is over and the eagles are playing football? IT IS NOT FOOTBALL SEASON. IT IS BASEBALL SEASON. Do I REALLY need to spell that out for you? The Phillies are the sh*t and it’s baseball season. Of course there’s less eagles jersey’s on July 18th in the city during a NFL lockout. That’s no mesaure of which team has a larger share of the philly sports market or whatever this phony/pretend/meida and some fan dillusion really is.

Why does it have to be one or the other? Can anyone argue with the following statement – “Philadelphia is a vibrant sports town with a massive following for both the Phillies and Eagles. The majority of fans overlap and are equally passionate about both of those two top sports in town.”

I think that its a shift in balance where depending on how a team performs it then becomes what makes the sport the city adores. 1995-1999 who gave a shit about the Eagles? in the 80’s it was all about the sixers now you can barley count how many sixers fans their are on your hand lol. If you think its still a football town then I respect that but you cant deny that the phillies are closing in on being a sports town favorite.

Phlly is a sports town. period. To argue it is a football town while the baseball team sells out well over 100+ consecutive games, sounds like a cry baby, jilted football fan/organization jealous of the baseball team’s success

There’s no questioning that the Phils popularity has grown – as their wins have. But I see no reason why Philly can’t have 2 favoirtes. I think we do.

How many people at the Phills games just go to be up there? Alot.I have buddies who go(cause they’re without kids and real financial responsibilities)all the time and thats what i here. Popularity contest. Young kids just goin to go.Get drunk in the lot and walk around the concourse hammered and doin there thing. Its great and most do have a love for the squad.

I’d say the Phills should be the more dominant team. They’re stacked with arms and should be able to handle everyone in the NL for a bit. Football is different and we’re in a tough division. If the Birds get a title this year it would push them towards some dominance.That was a tough question.

The Phills are easy to love….win most series,great guys on the squad,and its every night. Football has hurt itself but once the camp starts it will be Birds non stop.

If the Eagles win a super bowl? there wont be a debate anymore

Right but Gary quoted This is a football town… not its a baseball/football town. I can dig that its both no doubt but I was just putting some facts out there. Thats all.

Rasheed very true but Football in my opinion is the hardest sport to win a championship in (of course if I was in Pittsburgh I would have a different opinion)
there is no room for error while in other sports there is a 5-7 game series… Its one and done in the NFL so perfection is a must.

Philly is an all-around great Sports town and I never understood why it even matters on labeling a this sport or that spot, most Philly fans love all the .. One think I notice when watching Phils games is the amount of females who just love the Phils.. I bet they draw more females to their games than any other franchise and as a fans and the women/girls are into it and know their stuff…I think the old Vet Stadium got to be so ugly,crude,etc,etc that many fans (Women/Children mostly) just starting not to go due to the behavior of too many drunk knumbnuts…
One last thing, I do think the US Congress will pass and Pres Obama will sign into law Raising the Debt-Limit Resolution by Aug 2nd…

As soon as chase utley is gone as a Phillie my chance of getting laid will become more slim paulman.. Women love chase utley

Women love me too Vricchini, even your old flame Rachel Ray who told me in confidence that she forgets about the 2-3 months you spent together….