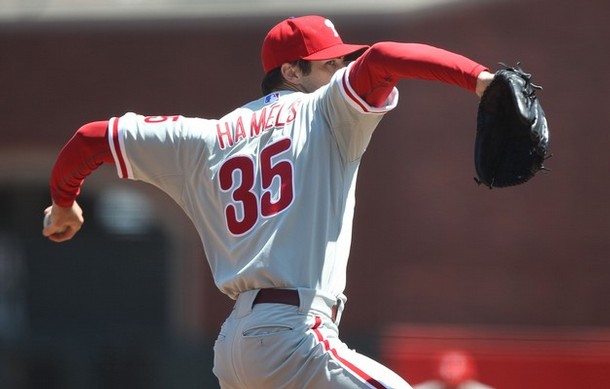 The Phillies had an important game on Monday night in Cincinnati. It was a game that featured the return of starter Cole Hamels, who had been inactive for two weeks after experiencing stiffness in his shoulder during his most recent start against the Washington Nationals.

Hamels needed to come out with an encouraging performance to quiet some of the fear that he might be suffering from something other than just a dead-arm period. He turned in a good outing, allowing just one run on two hits, and striking out seven over six innings of work. He looked much stronger than he did against Washington, and much more like the pitcher who had been pitching like a Cy-Young Award candidate for most of the season. The only run he allowed was partially a product of a misplayed ball in the outfield by Hunter Pence, which allowed Brandon Phillips to reach third base to leadoff the inning.

The Phillies still took a precautionary approach with Hamels, and removed him from the game after six innings despite the lefthander only throwing 76 pitches. It was the right move to make. With the ace already turning in a strong performance, in a regular season game with little meaning on the entire season, there was no reason to push him too far in his first game back.

Though he pitched well enough to win, Hamels didn’t receive the run support to be the winning pitcher. The offense only managed one run on two hits while the All-Star was in the game.

They finally added two more runs in the eighth inning on a two-run homerun by Shane Victorino. Reds’ pitcher Homer Bailey had pitched very well through seven innings, but hung a pitch in the middle of the strikezone that Victorino crushed 397 feet into the right field seats. It was the first hit for the centerfielder in his last 11 at-bats.

The Phillies bullpen turned in a strong performance as well. Antonio Bastardo was the first to step in for Hamels, and struck out the side in the seventh inning.

Mike Stutes got the ball in the eighth inning with the lead in hand. He survived a shaky inning, in which he gave up a run on three hits, but was still able to get the job done and put the ball in Ryan Madson’s hands in the ninth inning.

Madson began the ninth inning by giving up a leadoff single to Jay Bruce, but then settled down. He struck out Yondor Alonso, and then got Drew Stubbs and Edgar Renteria to ground out to end the game for his 24th save of the season. It was the first true save opportunity for the righthander since he blew a save by giving up six runs to the Nationals on August 19th.

Facing a taxing schedule of 33 games in 31 days, the Phillies began the challenging stretch with a good victory behind an encouraging performance from Cole Hamels. The Phillies will try to begin a winning streak tomorrow when Roy Halladay faces Bronson Arroyo in the second game of the series.

Player Of The Game: Shane Victorino

Cole Hamels was excellent in his return to the mound, but Victorino’s homer in the eighth inning was the only offensive spark of the night, with the rest of the pitching staff pitching at a high level, it was the difference the Phillies needed to claim a victory on Monday night.

Hamels Career Stats versus the Reds and especially pitching at that Great American Park are off the Charts..The game was very fast moving and had a playoff feel to it.. The Reds have been unacheivers this season due to spotty Starting Pitching,but they always get battle the Phils in close 1 run games all the time..
And I do agree even though Hamels 76 Pitches that being his first game after missing a coupld of starts, no sense in pushing it though he was in complete control