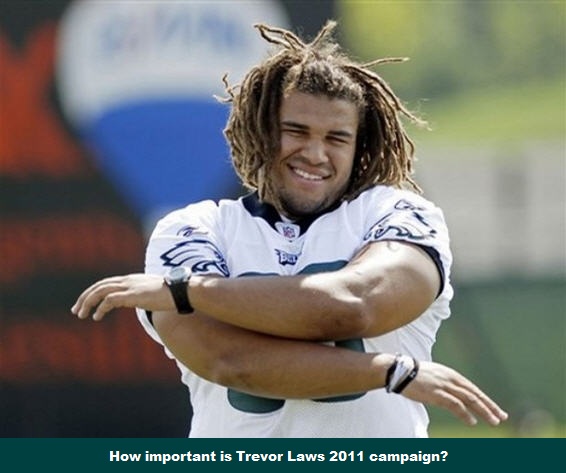 When you’re checking out the game tomorrow night between the Philadelphia Eagles and the New York Jets make sure to focus on the defensive tackles. Like many of the players in the game, these guys will be fighting for the their football lives.

Trevor Laws, Derrick Landri and Anthony Hargrove will be battling to make the football team. One of them may make the team or possibly two of them will make the team depending on how many defensive tackles the Eagles are going to keep.

Cullen Jenkins, Mike Patterson and Antonio Dixon are locks to make the football team, but Laws, Landri and Hargrove are all on the bubble. Laws is a former second-round draft pick.

Landri is going to be hard for them to cut. Sources close to the team believe he’s going to make the team and they feel that the battle is really between Laws and Hargrove to see if they can force the Birds to keep five defensive tackles.

Landri recorded a sack in the first preseason game against the Ravens and he’s had a very good camp. This young man has a serioius motor and you know that goes a long way with defensive line coach Jim Washburn. I’ve heard that Washburn loves him.

Hargrove has also played very well and had a good camp. He plays very hard and gives tremendous effort.

Laws has been out of action because of a hip flexor for most of the camp.

“I’m able to practice,” he said yesterday. “It’s a lot better than it was before. I’m not 100 percent, I wouldn’t say, but I’ve made huge strides in my recovery process.”

If Washburn had been the coach last year, Laws wouldn’t be under such tremendous pressure to play well, but coaches tend to go by what they see rather than something somebody tells them. Washburn is probably going to select his players based on what he has seen, so it’s step up time for Laws.

“You spend the whole offseason working your tail off, getting your body right, only to come into camp and blow a little gasket,” he said. “It [stinks]. But it’s good to be back in time for the regular season. I’ll start making plays when it matters.”

I couldn’t emphasize it any more that Laws has got to put up a very good performance tomorrow night.

Foster won’t be ready for Week 1?

I agree G and stated when the Eagles signed both Hargrove and Landri that Laws was going to have a put a good camp and he hasn’t been able to stay healthy to get on the field.. I notice at the 1st 2 practices of CAmp in late July,that Laws looked very bottom heavy and was laboring around and was not in the kind of shape that I expected on a player if he’s trying to have that breakout season.. I am not sure what’ with these Notre Dame players recently, but that all seem to lack that Desire, that competitive fire.. We’ve seen it with Abiamri, Laws,J Claussen, B Quinn, G Tate,R Mirer, and others over th years.. It appears they just go thru the motions of playing ball instead of going all out which you have to do at the NFL Level.. maybe they are all too cerebrial and think too much instead of playing.. but I would stay from ND players .. 4th Year for Laws and we still say potential every time we mention his name.. Time to cut the chord and go with players who practice and produce
I saw Landri play a lot last year with the Panthers and I was very impressed by his effort and he always stood out and was making plays on a pretty bad team where some of the players had packed it in, but not Landri, he plays from whistle to whistle and I think it would be a big mistake by the Eagles if he doesn’t make the roster. He’s blue-collar,bring your lunch pale to work type of player and will be a fan favorite too..
What I like about Hargrove is that he can rush the passer from both DT & DE and is very versatile and I would like to see the Eagles keep him too..
If I was Coach/GM, I keep both Hargrove and Landri and part ways with Laws and Parker

Laws has had many nagging injuries. As a rookie, he came in with a foot or toe problem. He looks like a female russian arc welder with that hairdo.

Pman: I guess you know that Landri is an ND alumnus. Abiamiri/Laws could have been very good players had they not kept breaking down. Golic was solid for Eagles.
But like you, I’d rather keep Hargrove & Landri for total of 5 DT’s and let Laws go at this point. The team has been too patient with the likes of both Andrews, McDougal, Abiamiri, Laws, Marlin Jackson, and sadly with Ingram who had bad surgeon at Florida that didn’t get knee repaired properly the first time.

Iggles
I was aware that Landri was a ND Alum, but since Landri has a vowel at the end of his name, I didn’t want to insult the Italians on this site so I chose to omit him from my ND under-achiever list..
I also meant to list OT Ryan Harris as a ND underachiever..

Laws has played well when he’s had the opportunity to play and he’s been available for a lot of games.

Laws has zer0 upper body strength. The only way he can bust through is if he gets a running start from the mike position. Maybe he’s changed in the off season but he’s all leg power. He’s another first pick bust in my opinion. I like the two free agents better than him.

Forget Notre Dame Players. Ill take my chances with any player from the U. Even though it seems we got the only projected impact player from the U that was a bust even though it was medically in McDougal. How many stud players does the University of Miami have in the NFL? They may be veteran players but still. How is it that the Miami hasnt challenged for a national championship in the last 10 years?

The U ain’t all that once was. The talent pool isn’t necessarily on one team either. True impact players are the ones who’ve done it there entire lives from highschool or before. Shady was a beast at bishop mcdevitt even in junior high.

Not saying the U couldn’t make a comeback but you can’t just say “the U” and expect them to be great.

The U has had many busts th elast few years ..
Probably the best overall COllege programs that turn out consistent, tough, well coached players in the Pro’s are are the following

Most overrated COllege PRograms in turning out players who underachieve in the Pros
#1) Penn State — Not even close, they don’t even turn out good LB’s anymore
#2) Michigan — Program been o a spiral downward for the last 5 years
#3) Notre Dame — Overated Program with great Traditions from 20 Years ago
#4) USC — Has turned out lots of Pro’s, how many went on to have productve careers.. 1 out of 5 maybe..
#5) Oklahoma — Talen and speed but that Sread offense never seems to translate well to the Pro’s, have turned out good DL and good DB’s
#6) Georgia, lots of hype and high picks, most never amount to much in the Pro, do turn out good OL,DE and DB’s..

Miami’s line-up is quite impressive indeed..

laws gained muscle and lost fat this off season ..they say he wokred like an animal..had 4 sacks last year… i really like hargrove he makes alot of plays and can close quickly with 4.6 speed.. and landris motor never stops .. its gonne be a tough decision becuase laws gained muscle and lost 15 lbs and was ready for a break out year and now hes hurt and we cant see him perform

Laws, Parker, Hanson & Jamal Jackson are goners! The $$$ will give them leeway, to re-up DJax. Right now, they only have $3.5m under the cap. I was still hoping they would trade Samuel, for a starting LB &/ or picks. But that is unrealistic, at this point.