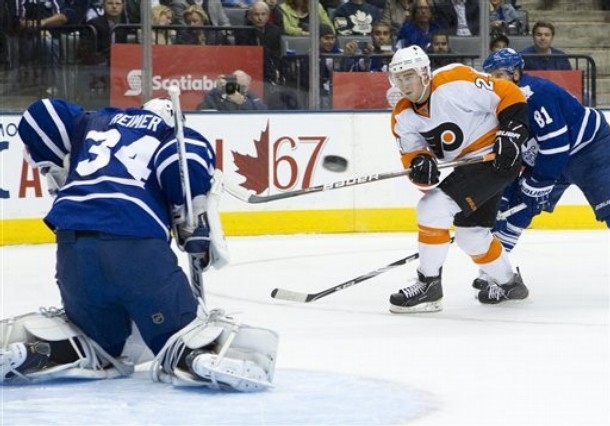 The Flyers iced James Van Riemsdyk, Matt Carle and Sergei Bobrovsky in tonight’s preseason opener against the Toronto Maple Leafs. The three players represented the few remnants of last year’s team, with the remainder of the line-up filled with offseason acquisitions, prospects and invite Adam Mair. The resulting 4-0 win at the Air Canada Centre raised a number of questions about this year’s roster, and who should be given a second look moving forward.

As a final thought, I was preparing to write a post about how I felt Michael Leighton should be given a chance to fight for the back-up position. After tonight’s performance, though, I want Bob to fight Ilya Bryzgalov for the starting position. His puck handling looked much better than it did all of last season and his composure stayed steady throughout the game. Bob, stopping all 27 shots he faced, earned his first shutout of the year (although, yes, it is just a preseason game).

The Flyers face the Maple Leafs again tomorrow night. The rosters have not been set for either team, but expect to see Ben Holmstrom, Michael Nylander, and Bryzgalov in the line-up.