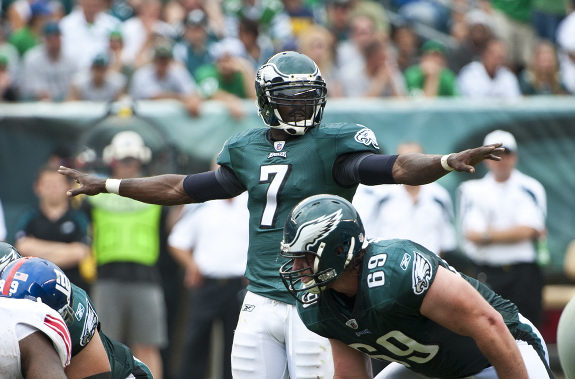 Eagles quarterback Michael Vick just talked to the media at the Nova Care Complex and he says there’s a 100% chance that he will play this week. Vick says his hand is still painful and needs to have the swelling reduced more, but he plans on playing this week

Vick currently does have the ability to grip the football although he can’t grip it to the extent that he needs to in order to play in the game. Vick said his hand is still very sore.

Eagles head coach Andy Reid says he won’t jeopardize Vick’s safety and that Vick has to be able to control the football in his injured hand. According to the coach, Vick’s hand must continue to improve in order for him to play on Sunday.

Brian Rolle Takes Over For Casey Matthews At Will Linebacker

Gotta love his attitude if nothing else…. I dont know how ready he’ll be, but at least he isnt gonna give up… he’ll be in a wheel chair still talking about how he is playing next week anyway.. lol

Sunday, Injury #3! Then Andy will be shuffling the O-line, too! This team is a disgraceful mess! They should be ashamed to field this team, after all the $$$ they spent this off season! That alone, should get square peg in round hole Reid, & Rosebud fired! Wasted $$$ & 2 wasted drafts the last 2 years!! Absolutely disgusting!!
GO PHILS!!!!!!