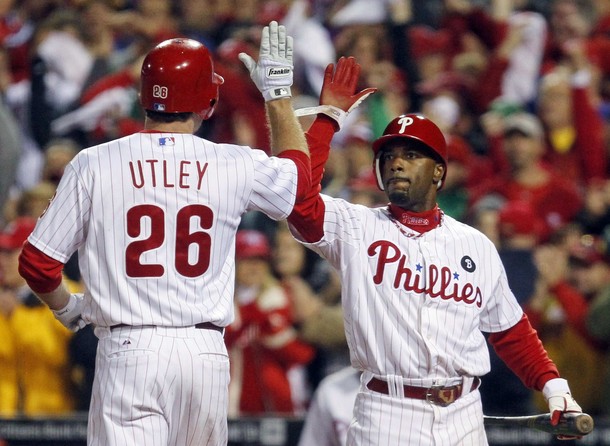 The Phillies veteran infield made a major contribution in Saturday night’s winning effort over the Cardinals and they helped the Fightins’ to a quick lead in the first inning last night in game two, but the St. Louis bullpen shut them down after a quick start.

Shortstop Jimmy Rollins led the Phillies out of the gate after he bombed a double off the right field wall. A clearly shaken up Chris Carpenter walked Chase Utley and Hunter Pence to load the bases with Ryan Howard to the plate.

As he did in game one, Howard battled to a full count and delivered with a single up the middle to score two and give everybody the feeling that the Phils were well on their way to gaining a 2-0 lead in the best of five National League Division Series.

Philly continued to jump on Carpenter but third baseman Placido Polanco stepped into the batter’s box and did what he’s done best thus far in the series, he killed the rally.

The third baseman has been 0 for the series and didn’t look any better Sunday night than he did in Game One. He

had a chance to get something going in the top of the ninth but hit a can-of-corn to right field for the second out of the inning. He hasn’t looked comfortable at the plate and has been chasing balls out of the zone.

Rollins played another great game yielding the same explosive swing he brought to game one. The three-time All-Star nearly went yard twice this game, but the right field wall held him to doubles on both occasions. In the bottom of the seventh, Rollins was anticipating stealing a bag and ended up being picked off first base with Utley at the dish to end the inning in a key point of the game. Sure, Marc Rzepczynski caught him sleeping but, even with one slip-up on the bases, you can’t take anything away from the great series he has been having.

Utley did a good job of battling in each at bat and he found a way to get on base three times in the game without getting a single hit. He struck out once, walked twice and got hit by a pitch in the bottom of the eighth.

Howard went 1-4 on the evening and did have an untimely strike out in the bottom of the eighth, but he did drive in two of the Phillies four runs, which give him six RBI’s, so far in the series.

The two keys to the game was the Cardinals ability to pound Phillies starter Cliff Lee and the job their bullpen did in shutting down the Phils for six innings after they knocked out starter Chris Carpenter after only three innings.

Cardinals manager Tony LaRussa used six pitchers to blanket the Phils. Fernando Salas went two innings without allowing any runs or any hits. Next up was Octavia Dotel, then lefthander Marc Rzepczynski, then Mitchell Boggs, next up lefthander Arthur Rhodes and finally Jason Motte to finish things out.

Charlie Manuel is going to make sure the infield makes some adjustments because the Cards were finding holes in the infield way too easily. Expect the Phillies to come out defensive minded, but yielding their lumber when their plane lands in St. Louis for Game Three.