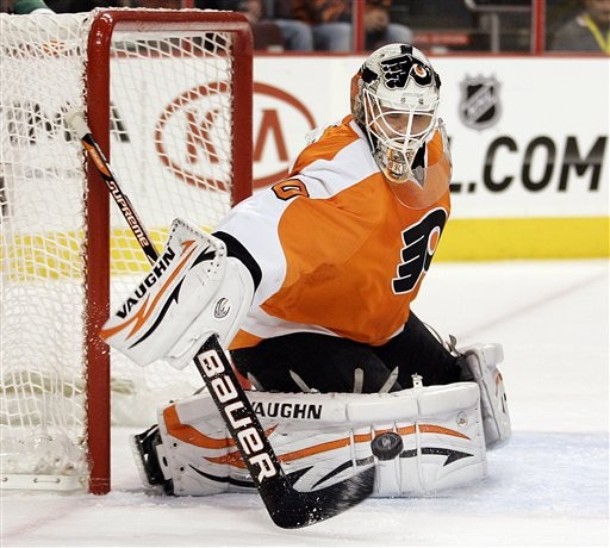 It’s been almost four months, but I can remember it as if it were yesterday. I was on one of my breaks at work as I heard news about the Jeff Carter trade to Columbus. It had been rumored since before the trade deadline, but I never actually thought it would matriculate.

Surprised, I quickly filled-in my fellow co-workers who shared the same emotion. Most of them were not pleased to see the Flyers top goal-scorer leave town. I told them it was necessary for cap reasons, and headed back to work a few minutes later.

He wasn’t. I then read the headline that burned into my memory as if it were an anniversary. “Flyers trade Carter to Columbus, then deal Richards to Kings.”

My jaw literally hit the floor. Since following the team as a child, I was never more thrilled by a pair of moves in my life. I wanted the season to start the next day. Mostly everyone I talked to was shocked and upset that the Flyers just traded away the face of the franchise. I guaranteed everyone right then and there that Bryzgalov would be signed, and that the Flyers just prevented a rebuild 3 seasons down the road.

Let’s face it, with all the rumored locker room turmoil, and both Carter and Richards having peak value at that point, the return was just too much to pass up.

It was simply the boldest and biggest move in Flyers history, eclipsing even the Lindros deal.

There were a few questions though. The Flyers suddenly had just wiped off 112 points off the board. Who would replace them? How would the Flyers contend with a younger core? Where did it place them in the improved Atlantic division?

Some of those questions can’t be answered yet. They’re off to a solid start, but the biggest question still lingers. What do the Flyers need to do in order to contend for the Stanley Cup?

What is most important for this team is consistency in scoring. Too many times over the last few seasons the Flyers have been either hot or cold with their offense. This lack of consistency is what cost them the #1 seed in the Eastern Conference last season. The Flyers system prides itself on rolling four lines. With the additions of Simmonds, Voracek, Jagr, and even Max Talbot, the Flyers have depth with point production.

At some point, Claude Giroux and James Van Riemsdyk will fall into a funk. It happens even with the most prolific of point producers in the league. This is where the newest Flyers will have to prove that they were worth it. The

secondary scoring will be the most important aspect to the Flyers success this year. The added size along the wings will help the high-pressure forecheck obtain the garbage goals that the Flyers lacked all last season. Without this production, the Flyers will struggle to win games.

Although the Flyers have Ilya Bryzgalov, the Flyers defense will ultimately be the deciding factor on how well he fares. While Bryz has the ability to win games on his own, if the Flyers defense continues to have holes as they had against Vancouver, this team will be in major trouble. As good as he is, he won’t be able to carry this team on a nightly basis. Regardless if you have Bryzgalov, Luongo, or even Tim Thomas, a goaltender is only as good as the defense in front of him. The Flyers need to tighten up on defense and play a little more conservatively or they will make their new $51 million dollar goaltender look like one of those mediocre goal minders which that they had in the past.

The special teams are another added attribute that will weigh heavily on how the Flyers will fare by season’s end. With a healthy Chris Pronger, both the power-play and penalty-kill units have been bolstered. The power-play struggled without Prongs in the lineup last season, and there has already been a noticeable difference in puck movement alone. The Flyers seem to be taking more shots instead of looking for the perfect play down low. With the booming shot from Pronger at the point, the Flyers have re-added a weapon that was truly missed.

And finally, above all, the Flyers success this season rests upon an unknown.

In order for the Flyers to have any chance of competing for Lord Stanley, Chris Pronger needs to play the whole season. Luckily for him, the Flyers still have the most expensive blue line in the NHL. The play of Andrej Mezaros last year showed that Peter Laviolette can cut down on the captain’s minutes. The less time that Pronger spends on the ice gives a slimmer chance of him getting hurt. The Flyers need Chris Pronger’s leadership both on and off the ice this season. Their chances of contending decline greatly if he spends too much time in the press box. He is the leader of the Flyers in every sense of the word, and will be the key factor in bringing the whole team together.

And since there are still 79 games to go, only time will tell what will happen with this team leading up to April.
Next week, I’ll be back with a better look on how the Flyers will stack up against the Atlantic Division, and the powerhouse teams in the East.

Is The Phillies 2008 Championship Honeymoon Over?

Though the Lindros deal was among the biggest NHL all-time, in the end it proved to be one of the worst trades for the Flyers who gave up FAR too much to get a player with a limited career and sent the Nordiques/Avalanche to Cup wins.
Yes, there were some bad defensive play vs the Canucks… who incidentally had/have the best power play in league, but much of that was due to bad penalties and inexperience. Has nothing to do with lesser talent or lack of smarts and Lavi will coach them up.
The season is very long, so we’ll all see how they fare during the last 20 reg season games. The Penguins, Caps, Boston have experienced and solid teams so there is no easy road to a Cup… the eastern conf is loaded with stumbling points. The Atlantic division is improving too. But teams which have strong defensive play and penalty killing, stout goaltending and can apply constant pressure in off zone will have best chance. In the end it doesn’t matter what other teams do, but how much the Flyers progress during the entire year, particularly down the stretch. Young persistent, talented legs, strong blue line and goaltending increase your chances. The Flyers should be able to contend with good health.