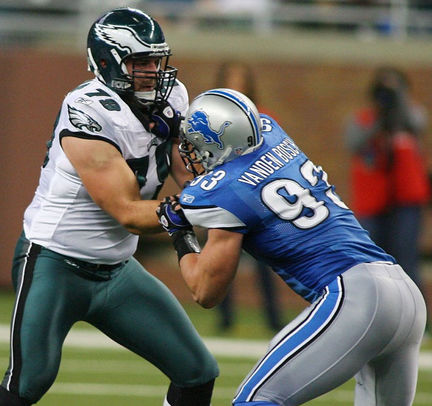 Eagles head coach Andy Reid just finished his day after news conference and I could hear some planning in his answers when he talked about his offensive line and more specifically his three offensive tackles.

I think Mr. Everything on the Birds offensive line, Todd Herremans is going to find his way back to that left guard spot before the season is over. Reid was asked what he would do if he had a healthy Jason Peters, Todd Herremans and Winston Justice.

He didn’t even try to answer right away which told me all I needed to know. He also gave nothing but clichés which talking about left guard Evan Mathis. He said he was a good athlete, who loved to play the game, which means nothing if you know Andy Reid jargon.

Herremans has done a tremendous job for the Birds. He played left guard all preseason, then moved to right tackle at the start of the season and yesterday he did a great job of at left tackle yesterday. He may be the most versatile offensive lineman in the National Football League.

I think Reid would love to see Herremans lined up next to Peters on the left side of that line. It would give them a strong run side and probably give the Eagles a place to run on short yardage and goalline. Right now they have no place to run in those situations.

Current left guard Evan Mathis isn’t a strong straight-ahead blocker, but as Reid said he’s a good athlete, who can get out in front of screens and sweeps. I saw him getting pushed into the backfield on LeSean McCoy’s touchdown run, yesterday.

The bye week will be just what the doctor ordered for Peters, who will have time to recover from his hamstring injury. Justice got the chance to play yesterday and did a good job. He will now get the chance to continue to get stronger.