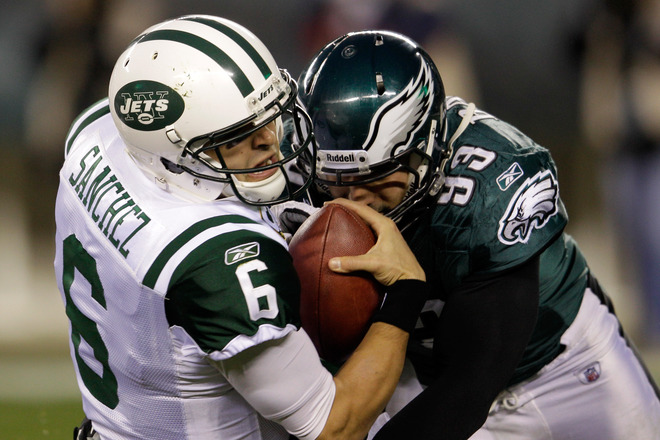 Domination. In a must-win game for the Eagles, they put together one of the most impressive performances of the season and kept their slim playoff hopes alive. The Birds jumped on the Jets early en route to a 28-0 lead and the outcome was never in doubt. The much-maligned defense swarmed to the ball all night and completely overshadowed the hyped Gang Green defense of New York. Juan Castillo developed a great game plan of new

coverage schemes and blitz packages that rattled Mark Sanchez and the Jets offense.

No matter what the Jets threw at the Eagles defense, they responded by shutting it down. The interior triangle of Mike Patterson, Cullen Jenkins, and Jamar Cheney held Shonn Greene, Tomlinson and the rest of the New York running game to only 3.5 yards per carry. And after the Birds had jumped out to the huge lead, they forced the Jets to throw the ball.

This played right into the hand of defensive end Jason Babin and the Eagles’ pass-happy defense. The former Titan recorded another three sacks, raising his total to 18 for the season. Howie Roseman signed the one-time first round pick to a huge deal this offseason to put pressure on opposing quarterbacks, and that is exactly what he has done. The journeyman is not just a typical down lineman, though. On one of his takedowns of Sanchez this week, Babin was in a standing position behind the defensive line at the snap.

Thank Castillo for this one; Rex Ryan’s team was not prepared for the formation. The offensive line coach turned defensive coordinator has received a myriad of criticism this season, and rightly so. But in recent weeks he has vastly improved. He has put his team in better position to make plays, although his job security is still very much in question.

With Babin and the rest of the defensive line getting constant pressure on the former Southern Cal quarterback, it made it an easy day for the secondary. Nnamdi Asomugha, Asante Samuel, and DRC shut down the Jets’ wide outs and held Sanchez to 150 yards passing. The defense even got the scoring started when Juqua Parker recovered a fumble forced by Kurt Coleman and Casey Matthews and returned it 47 yards to the house.

Later, Curtis Marsh  made a mistake on a punt return for the second straight week and gave New York the ball deep in Eagles territory. The youngster was hit by the football while trying to block one of the Jets.  Luckily, Asante picked off a Sanchez pass intended for Santonio Holmes and completely turned the tide of the game. The Birds drove down the field, went up by two scores, and never looked back.

Say what you will about Asante’s tackling, the Central Florida product is a gamer. Unlike Desean Jackson on the other side of the ball, Samuel has given his all despite a contract dispute. He is always around the ball and making plays. The former Patriot always plays with effort and a swagger that is not seen with the rest of the defense.

Will this victory ultimately become fruitless? Maybe. But with two weeks left, the Eagles’ season does mean something. With two wins and some help, the Birds can actually make the playoffs. Although an 8-8 season is certainly not what the Philly faithful had in mind in September, fans throughout the Delaware Valley and beyond will be able to spend Christmas Eve rooting with family against the dreaded Dallas Cowboys in a must-win game. At this point, that is all you can ask for.