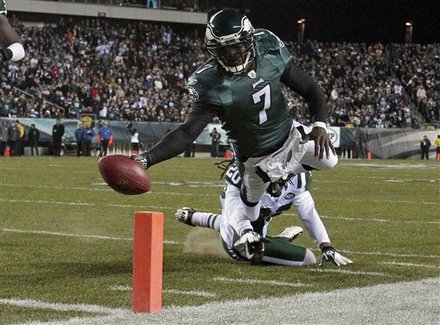 Hold “The Fat Lady” back for at least one more week; the team that I wrote off back in week five, and then again in week nine, is still alive and praying for a playoff berth.

Sunday afternoon’s 45-19 convincing victory over the New York Jets was another reminder of the talent and potential that the Eagles posses.

Leading the offensive attack on Sunday was a seemingly healthy Michael Vick. The Eagles franchise quarterback put together his best passing performance since a week eight home victory over the Dallas Cowboys.

In Sunday’s win, the former Virginia Tech star threw for 274-yards and a touchdown. Vick also ran for a touchdown and finished the game with a passer rating of 107, his second highest total of the season and a rating greater than the sum from his last two outings.

“I thought he did some good things”, Andy Reid said about the play of his quarterback. “It looked like he knocked the rust off last week, and he came back and had some beautiful throws today. I thought he managed everything well. He did a good job.”

Most notably the Newport News native seemed confident in the pocket, making clutch plays when the team needed it most. Perhaps this is due to the offensive line, which recovered from a poor performance against the Dolphins.

Vick took advantage of the Jets linebackers by targeting starting tight end Brent Celek and his backup Clay Harbor. Celek finished the contest with a career-high 156 yards receiving which contributed to three first downs and his 3rd touchdown catch of the season.

The development of the connection of Vick and Celek could be huge in the advancement of the Eagles passing game.  Throwing to the tight end is like a going into the post in basketball so that you get a short and easily makeable shot.  Celek was targeted six times and connected with five of them.  If Vick and Celek continue to connect it will drive up the quarterback’s completion percentage as well as the offense’s effectiveness in the red zone.

Darrelle Revis and the Jets secondary did a good job on Eagles wide receivers DeSean Jackson, Jeremy Maclin and Jason Avant but Vick had a big day any way by going to Celek and Harbor.

On the other side of the field, Jets’ quarterback Mark Sanchez did not fare so well.  The Birds defense kept him off balance all day long by sacking him four times and picking him off twice.

The Southern Cal grad threw for just 150 yards while completing 15-26 passes for two touchdowns along with the two picks.   It took Sanchez a long-time to get things going.

In fairness to Sanchez, he didn’t get much help from his number wide receiver Santonio Holmes.  In the first quarter, the former Super Bowl MVP had his fumble returned for a touchdown and a pass which went through his hands picked off with the Jets offense in the red zone.  For much of the first half the Jets had negative passing yards.

It was the third-year quarterback’s third worst statistical performance of the season. He was pulled from the game in the fourth quarter and finished with a passer rating of 67.8.

Next up on the docket for the Eagles is a must win week 16 trip to Dallas.

Now With Rollins Signed, Will He Continue To Lead Off