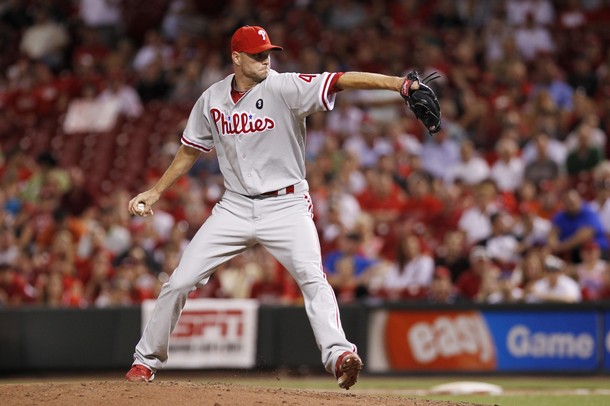 The December meetings are long over and Scott Borris’ client is still without a team. Ryan Madson, who was once referred to as one of the better relievers this offseason, was close to signing a $44-million dollar contract with the Phillies, but Ruben Amaro Jr opted Jonathan Papelbon to fill the void instead.

The almost deal with Philadelphia gave teams a sense of Madson’s asking price, but with the 31-year-old still unsigned that price is bound to come down.

Some believed the Red Sox would pursue the former Phillie, but after they traded for Andrew Bailey from the Athletics, their need for the Long Beach native was gone.

In his tenure in Philadelphia, the tall righty proved his worth as a closer and with saves being one thing General Managers love to pay for, he was ready for a big payday. But after the Red Sox exited the market so did any real chance of Madson signing for big money.

What does this mean for Madson?

This doesn’t mean all plots point towards death; he had 32 saves and a 2.37 ERA in his first season as a closer, he just picked an unfortunate time to enter free agency. Most teams have looked for already established relievers or cheaper fixes and Madson is neither of those. Heath Bell took his talents to South Beach, while the Padres replaced him with Houston Street. The Rangers named Joe Nathan their closer and the Mets gave their opening to Frank Francisco.

With the eight-year reliever avidly seeking a long-term deal, his chances are growing worse as each day passes. Sharing the market with little established veterans, Octavio Dotel, Francisco Cordero and Sergio Santos, have given teams options whether to pay big money for Madson or hire one of these older wildcards to a one-year deal.

With teams forcing his asking price to drop, just like Borris’ other client Prince Fielder, he is now playing the waiting game.

The most reasonable thing for him to do is to sign a one-year deal and be a short-term fix to a team waiting for a closer to develop. The Reds denied reaching out to Madson, but his playoff experience could have an influence on their young pen.

Many believe that the Angels are the front runner right now, but with the Rays, Astros and Orioles still in the race; his fate is anything but set in stone.

Madson was one of the few bright spots of Philly against the Cardinals and will bring stability to an unstable position. His power fastball and secondary pitches lead to high strike out totals, which will get a great reaction from fans.

I expect him to bite the bullet and sign a one year deal and pick up a nice payday next winter. But Borris was able to score Rafeal Soriano a three-year deal after the demand for closers were gone last winter.

There are three reasons he still isn’t signed. He is still very un-proven, not worth a big payday & Scott Boras is the biggest, greedy, @$$hole in sports.

Before this past season, he was very erratic in every opportunity he was given, & had one of the worst save % in baseball. So I guess that’s five reasons.

With the Red Sox trading for Closer Bailey, there are very few contending teams still in need of a Closer and definitely not at the $10-$12 Million range that Agent Boras is Seeking.. The only teams I see that may be interested would be the Florida Marlins, Detroit Tigers, Texas Rangers and possibly the SL Cardinals but again, not at the Salary Demands that they are looking for..

Chicago White Sox trade OF/LF Carlos Quentin to the San DIego Padres for 2 Pitching Prospects (1 a Double AA RHP named Simon Castro
and 1 in SIngle A LHP named Pedro Hernandez)
Quentin is in his last season of eligible arbitration and is slated to earn between $6-$7 Million for 2012 Season before coming a Free-Agent next off-Season..
Doesn’t sound like a lot to give up for Carlos Quentin, who when healthy, is a .260 Hitter and has averaged 22 Hr’s and 76 RBI’s since 2008 even with his missed games…

Quentin was had for nothing. WTF, didn’t Amaro try? He could have been perfect here. If this is the offensive team he is taking to spring training, the starting staff better start icing their arms down. Because this offense will scare no one!!!

Quentin/Nix could have made a nice platoon out in LF..

I can’t figure out Amaro this off-season: Pays a ton for Papelbon, when Madson, while not as experienced, is arguably a pitcher with a better repertoire at this point…Keeps Rollins, but we still have a shot Polanco at third, when Ramirez was available for a reasonable rate…No Cuddyer, either…And Madson seems like he made a bad misjudgement: perhaps he just sign a one year deal somewhere…Strange off season.

I would be pissed if I were Madson.. I think he got hosed..