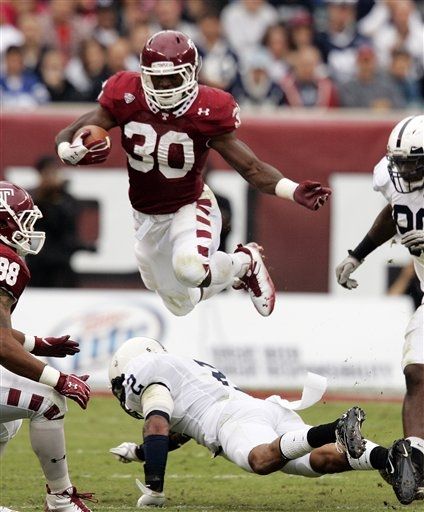 Much of the Owl’s recent success can be credited to Pierce.  Temple had won just 10 games in the three years before Pierce arrived to the Owls in 2009.  Since then, Temple has found a winning foundation with a 26-12 record and two bowl appearances.

As a result of his success at Temple the NFL Draft Advisory Board has given Pierce a 3rd round grade, something the three time ALL MAC honoree dreamed of but didn’t necessarily envision when he chose Temple.

“Honestly, when choosing Temple, it was not with visions of playing in the NFL,” said Pierce.  “I’ve always dreamed of playing in the NFL, of course, since I was a little kid but at the time it was just to get a great education and play collegiate football to the best of my ability, while staying local to my family.”

The Ardmore, PA native believes his decision to come out as a junior was a tough choice, but the right one for him and his family.

“My mom and I sat down and did a lot of soul-searching after the bowl game against Wyoming, and based on the grade I received back from the NFL Advisory Board, we felt that it was the right decision to make,” Pierce said. “I feel that I’ve accomplished a lot of what I came to Temple to do in terms of football, and I’m eager to see what the future holds for me in the NFL.”

When talented juniors declare for the NFL draft it is often speculated whether or not the fear of an injury to that player during his senior year played a factor in the decision.

“Injury was never a factor in my decision,” Pierce said.  “Confident football players don’t think about injury, there is always a chance that you could be hurt out on the field, but you go out and give your all no matter what.”

The first step for Pierce after declaring for the NFL draft was selecting an agent. Pierce went in the direction for someone who would get to know him and keep his best interest in mind.  Pierce was looking for an agent he felt comfortable around, which is why he selected Marty Magid of MRM Sports.

“We are excited about Bernard because we feel what makes him special is he can be a featured back, he can do it all, he doesn’t need to come out of the game,” Magid said when describing Pierce.

Magid is based out of Conshohocken, PA and represents over 20 NFL players including Denver Broncos pro bowl defensive end, Elvis Dumervil.  Many NFL draft experts share Magid’s enthusiasm toward Bernard Pierce. Pierce is considered one of the most underrated prospects in the 2012 draft class. He admits he isn’t too concerned with what the analyst are saying about him.

“I don’t really pay much attention to what the media or experts write about me,” Pierce said.  “I try to focus on improving my game, my explosiveness, and my speed.  Hopefully, when they see me at the Combine and Pro Day, GM’s and scouts will see that. My game film, of course, speaks for itself.”

Pierce is currently working on improving his explosiveness and speed in Atlanta with Paul Doyle of Doyle Sports Performance.  Magid considers Doyle to be one of the best trainers in the world.

Pierce is training for the NFL Combine later this winter where he will be competing with players from the larger BCS conferences.

“It is not intimidating at all, football is football, I look forward to competing with great athletes from any conference,” Pierce said. “I’m focusing on my training and improving my skills, I’m working hard every day, and staying positive and mentally focused.”

The theme coming from Pierce’s camp appears to be work hard and stay focused, which is the perfect attitude to have approaching the NFL draft. Pierce is described as a quiet kid with a great work ethic, and based on his answers, he seems to fit the bill.   Questions or comments about the article? Tweet me @JeryBrennan

Report: Manning & Saturday “Very Likely” To Be Headed To Redskins

Why Bryzgalov Should Start This Week in Preparation for Boston

When Jacobs leaves I believe this is the guy the Giants are going to select as his replacement, so enjoy watching the this Temple product burn the Eagles DE for the next 7 seasons.

Some Giants fan you are, on a philly sports site during the GMen game…jeeeez, Pierce was a beast at Temple Ill give him that, but he also played in the MAC, so I am not so sure we should fear him jussst yet if he goes to an NFC East team, not named the Eagles wish him the best tho…wouldnt be shocked if the Eagles took him, they drafted Ryan Moats LOL in the third round, when Westbrook was in his prime.

I like RB Pierce a lot and think he will very productive at the Pro-Level..
I can see him as a solid RB for a Team and can block and receive the ball out of the backfield, He’s 6-0 218 lbs and is probably a little faster and strong than many think and has a very strong lower body.. Could make a very good #2 RB and excells on short-yardage/red zone areas where he has a nose for the End-Zone… Probably a late 3rd/early 4th Round Selection and is currently Rate as the #90 Top Player by NFLDraftScout.com .

Yes yankeesfan2, what are you doing on a philly sports site during the packers-midgets game? Lol. Bernard Pierce will be a serviceable back in the NFL, actually I think he’d be a good fit in the Eagles scheme as a back up to Shady (25) “cut on a dime” MCoy.

Pman..no way he falls to the 4th

A Late 3rd/Early 4th is what Pierce is being projected ..
He’s rated as the 9th/10th RB and there are still lots of more Juniors tRB’s to Declare for the Draft which would proably push him down to the 12th-14th Overall at the RB postion

Maybe the Eagles will use a 2nd Round Slection on him like they did on Safett Jarrett..

No way, 3rd round pick at worst, ge literally was Temples entire offense, they couldnt throw, 8 in the box n still put up #’s n since it was the MAC he falls to rd 3

awwww yeeeeeea Eagles fanssss the dream team is up in NY, we’re gonna win more Super Bowls in 5 years than you did in 40 bhahahahahahahahaha!!!!!

Paulman you are always dead wrong on ur predictions, Pierce is a 3rd rounder, hopefully late 3rd round so gmen cant get him

I hope your right wassssup8705, for he seems to be a great kid and a very good player..

9-7 Giants are playing for the NFC title while the Eagles are going over their stats to comfort them. Schiller and Navy already have the stat sheets stuck together. Quick stat- one more win and the Eagles would have lost another playoff game but Joe Howie and Jeffery would have had a circle jerk of joy.