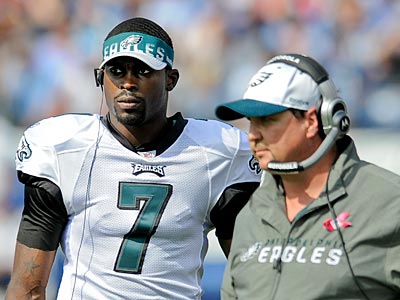 The Eagles may have new offensive and defensive coordinators before too long because Marty Mornhinweg will be interviewed for the Oakland Raiders head coaching job this week according to the NFL Network.  The Raiders are looking for a new head coach after the firing of Hue Jackson.  Bears offensive coordinator Mike Tice will also interview for the position.

Who knows, Mornhinweg may get a shot at the Indianapolis Colts position as well.  Yesterday Colts owner Jim Irsay and former Eagles Director of Personnel Ryan Grigson who is the current Colts GM fired head coach Jim Caldwell.   It wouldn’t be a stretch to see Grigson use his influence to bring Mornhinweg in for an interview.

This development could make Andy Reid’s coaching search much more complicated.  If Mornhinweg does leave I think it could leave Reid with an opportunity to correct something that’s been a problem with the football team.  Both Reid and Mornhinweg love to throw the football.  If they were to bring in an offensive coordinator in place of Mornhinweg who loved to run the ball, it could make the Birds a more balanced offense.  Reid loves to throw it and if his offensive coordinator loved to run the ball, they could balance each other out.

We’ll keep you posted on the developments.

This is a warm up interview between long time freinds.. Coach MM and new GM MCKenzie of the Riaders got their Coaching Starts with the Packers years ago.. I think it may be more of a courtesy interview to help Interview MM Stature and Value as he really attempts to be considered for the Colts Job.. Coach MM has been with the Eagles for a long time and hansn’t interviewed for a postioin in a while and aslo keep i mind that his QB son Skylay may de-committ to Penn State and wnat to go to Stanford which is up in the Bay Area…. Lots of moving parts as usual… I also believe the Spags will end up with the Saints or Colts to build his own Defense in his own liking and not work with a Sinking Ship that is the Philaldephia Eagles right now..Te NFL knows that Coach AR has this Season (2012) to save his job and I don’t see too many experienced Assistan COaches jum[ping on board with a “Lame Duck” Head Coach for what will likely be a 1 Year Job in Philly.. Eagles are going to be in trouble in terms of a Coaching Staff.. I exepct Ar to reach out to old friends Brad Childress or Mike Sherman as OC to replace MM. It will be interested in to see how QB Vick can adjust to another OC in what will be a defining Season for not only AR, but for Vick himself who is being paid as an ELite QB but did not perform being close to one in 2011

I hope Marty gets the job.

I want Andy Reid and Andy Reid alone to take all the heat for his acts of buffonery.

I blame Andy Reid for everything.

Plus Andy is only going to hire a puppet. That’s why McDermott and Juan got hired. He gave the offensive line job and the defensive line job to vetran coach’s and put his private puppets in charge of the show.

A weak, insecure man. Not worthy of being the headcoach of the Philadelphia Eagles.

Andy Reid is the new GW Bush… Republicans love it…

Has anyone asked the question why the Rams defense was pathetic under Spags? I mean he was the defensive guru right? Why does he get a free pass? Kinda like Jeff Fisher and his 1 superbowl appearance in 50 years of coaching. Hell Jeff Fisher cant hold Andy Reids jock in terms of accomplishments if you wanna be real about it but yet he is loved and coveted. If Im correct Juans defense was top 10 in many categories while “Spags” was pathetic and in the 20s. Has anyone asked Spags why his defense wasnt any good? Yes I want Juan gone and still want Spags but I am very cautious about annointing him this great saviour. Maybe the Giants player personnel guy has alot to do with their DC success as it is obvious now. Just saying.

Man you guys really don’t know Andy. If Marty were to leave then the next OC will be Doug Pederson. Andy stays within his circle. I’m also starting to think that “Spags” is not coming back. Andy could care less what people think, and that’s his history. Here’s to hoping that’s not true.

The next OC will be Jim Washburn.

To Chuck,
My sources in Indianapolis have MM as the Colts next HC and Pederson as the Colts O/C…
Spags has no interest in coming to Philly, I really wish the local philly media/fans would realize this and move on…It’s not happening…
Spags will seriously think about the Saints/Colts/Dolphins open DC Positions based on who their HC will be.. He’s biding his time but there is no PHilly in the mix as I have stated for 2 weeks now…

To be honest Chuck, with AR about to begin his final season as HC for the Eagles, and if he loses MM which I say is about 85%-15% of happening and stated so since about mid-season, AR will become the the defacto OC by going back and calling the plays himself, maybe he brings Childress back, but in all likeliehood, AR and going to circle the wagons on who he trusts the most and end up calling the plays himself… If you do indeed know AR, this is how he operates.. He’s a lame duck and everyone knows it, so other Assts on the staff are going to be looking elsewhere and this means RB/WR/TE Coaches too.. Mudd, Washburn,Castillo, April are old school and loyal to AR and are not going anywere, Caldwell & Zordich are still green and probably wouldn’t find jobs elsewhere… The Rest of them (Cullie,Melvin, & others) though could very well move on for better or more secure opportunities.. It is what it is …

Good bye! Take Castillo with you & don’t let the door hit you in your @$$es!!! I hope Reid loses his whole staff, this way he can show what an even bigger, blundering, stupid, buffoon that he is. I wish he would just do us all a favor & resign, because everyone is bailing on this sinking ship & its lame duck coach!

Castillo is not going anywhere DCar.. He will be with AR until the end..which will be just after New Years Day Jan of 2013.. April,Mudd,Washburn all finish out their 2012 Contracts and move on or retire..
Next Off-Season will be the time for a new HC to come in who will be from the Coordinator level and a preson that most are not familiar with… There will be no big name HC to replace AR.. It will be an under the rada cocah has has never coached an NFL Game…This is how the Eagles Front OFfic eand Lurie operate.. They will hope to find the next AR who becomes a HC and stays on board for 10 years while remaining competitive …

Paul, don’t say that. I can’t bear the thought, damn it!!! I have a really bad feeling about next season!

G:
I didn’t miss Childress or Gruden until I saw just how “Mountain West Conference Offense” Big Red indulged his pass-happiness with Marty Mohrningwheg. I would welcome Childress back. He can handle it. But Big Red appears to be going nowhere with his DC “search”. I like Mike Singletary. At least he could coach the LB’s, and who’s to say he wouldn’t thrive with Washburn? That’s where my alternatives lie at this point.

nsid….I would welcome Chilly back as well. At least he respected the run and had some balance. Singletary is an interesting choice but the FO would be afraid he is too crazy and intense. He would not be AR’s cup of tea. It will end up being Juan because no one else really wants it. The Eagles are a dying franchise. They have stopped growing and they are now backsliding into oblivion. The HC is on his death bed and the QB has one more shot to get his mind right or finish out his career trying to scrape out a living as a back up.
But I still think they will win the NFC East next year since the Giants will be hung over from yet another improbable championship and Dallas just can’t get their act together. Then we will see what happens in the playoffs. I still think Andy saves his fat ass with one stinking playoff win unless they get a bye. If they get a bye, he can’t lose the NFCC again or it will still be curtains. That being said, I cannot see any way this team gets a bye unless a lot of things came together just right. So one WC round win and he is back for 2013.

A great hire at OC would be former Packer HC/Texas A&M HC MIke Sherman
He has Coach AR go a ways back with the Packer/Holmgrem version of th WCO but Sherman believes in physical play and a strong Running game..
He is very steady and I think would be a nice addition and counterbalance to Coach AR so he wouldn’t go off on jos 7-8-9 Pass Plays in a row type of deal…

tonto – do you have a brain? You just spouted the records of the Philadelphia Eagles. And a random sampling of Marty’s tenure with them. I’m not Marty fan, but to say that teams look at an OC for potential hiring by just the team stats, without factoring other info is ridiculous. There’s 30 some players, and other coaches that factor into a team’s performance.

Is life really that simple to you?

dag – Spags got a free pass from many Eagles fans because he wasn’t with the Eagles then. You know that saying “the grass is always greener on the other side”? Well (except for the ironic ‘green’ part), that’s totally applicable to a lot of the hater fans on this site. Everyone that’s not on the Eagles gets a pass. The Eagles done. Plain and simple.

Paul, you suck at posting on Gcobb.

Schill, go back down your parents basement, finish your hot pockets, fruit roll-ups, & juice box, then finish your Zelda game, & leave the talking to the grownups! BTW, for someone who spends all of his time on here calling everyone else haters, you do nothing but rip everyone, & hate on Paulman, constantly. Give it a rest. He is funny, very entertaining & when he isn’t being sarcastic, he has alot of good ideas & information. But you don’t have the sense, nor the smarts to know that. YOU ARE A CLUELESS, @$$CLOWN!

Dcar – my Dad’s dead and my Mom sold the old house… so uh, no. I always hated Zelda too – boring game.

Dcar – when I say ‘hater’, I refer to hating on OUR OWN PLAYERS AND COACHES!

And Paul’s information (other than the jokes, ‘entertainment’ attempts and utter bullshit) is 100% shit you can get off of reputable website – that’s where he gets it. So he’s worth nothing of substance.

Dude eat a bran muffin, stop taking yourself so seriously, take a look in the mirror, & say a prayer to whatever you believe in, because you have serious issues!

Randon!! the last three years is random…lol…Sorry i should have included not making playoffs in 05 or 07….was marty here in 05? anyway, yeah i think the top thing u look for would be 1) do u make playoffs and win…2) do u score in playoffs where it counts….3) does your off score in redzone…..just my opinion but scoring 16 points in 2011, and 10 points in 2010 sux