Harry Zolnierczyk Returned to the Phantoms 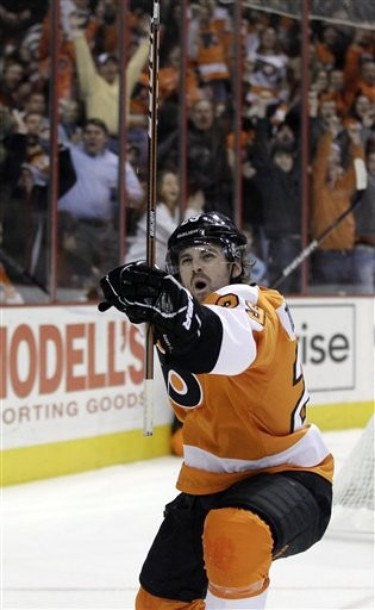 The Flyers announced and CSNPhilly reported today that they would be loaning Harry Zolnierczyk to the Adirondack Phantoms. There was no indication whether this would be just a weekend stint to give him playing time or if they expected to have him back soon, but with Tom Sestito still in the line-up and Danny Briere back from a concussion, it’s questionable how much playing time he would actually receive if he remained here.

Harry Z has three goals and five points through 36 games this season compared to Sestito’s one assist in ten games. It’s a toss-up as to which player “deserves” to be with the Flyers, as both players have shown they can be beneficial to the team in different roles. Harry Z is much quicker than Sestito, but Sestito has size and nastiness to his advantage.

In terms of development, it could help Zolnierczyk to spend some time with the Phantoms as he works on improving his game. He would earn much more ice time, especially with newly acquired forward Matt Ford away from the team this weekend to deal with a family issue. It’s no secret that the Phantoms need help with scoring depth too, so there’s a mutual benefit in the move.

Another factor to consider is that this is his first season playing hockey in any kind of professional league.  This is about the time of year when rookies usually hit a wall in production.  Sestito, who is the same age, has at least spent the last few years playing between the AHL and NHL already. He knows the drill.

Perhaps a minor benefit in this move is the additional cap space afforded the Flyers. Sestito is on a $550K contract compared to Zolnierczyk’s $900K contract. It’s not a huge savings, but every dollar counts if the team wants to have flexibility at the trade deadline.

Here’s A Picture Of DeSean Jackson In His Lakers Sweatsuit