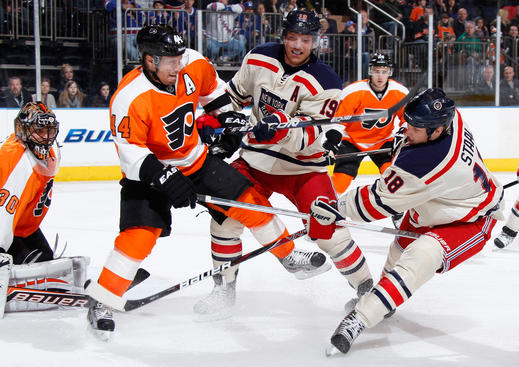 Tonight I was watching the Rangers/Devils game on NBC sports network. The game was called by the great Doc Emerick which makes the telecast even better than usual for an NHL game. Emerick in my opinion is one of the greatest if not the greatest announcer of all time for any sport. The excitement and energy he brings to the telecast keeps you watching from start to finish.

The game itself was good old fashioned rivalry hockey. Plenty of fists were thrown at the Garden and I began asking the question is the NHL’s Atlantic division the toughest, most competitive division not only in the NHL but all of sports right now?

The Atlantic Division tends to be the glamour division of the NHL. The national NHL telecasts always seem to have an Atlantic division game on the schedule every few weeks. Some of the biggest hockey markets reside in the Atlantic division. The division is also made up of teams rich in NHL history as some of the greatest teams ever have played in this division.

This season the competition is fierce in the Atlantic as the Rangers, Flyers, Penguins, and Devils all are in the playoff hunt. Currently the Devils, Flyers, and Penguins are all just 3 points apart from each other while the Rangers are holding down the top spot in the East. If things continue the way they are the division could end up with half the Eastern Conference Playoff spots.

Aside from the standings every time two teams from the division step on the ice the game is highly competitive and physical. Teams in the Atlantic are aware of how intense the battles can be when they step on the ice against each other. The only other division in sports that can rival the intensity and high competition of the Atlantic would be the NFL’s NFC East. The NFC East for many years was considered the toughest, most competitive division in the league. Today it’s still a division that gets plenty of nationally televised games but the regular season records over the past few years in the NFC East tells you the teams can’t compete with teams in other divisions such as the NFC North or South.

The NHL’s Atlantic division consistently sends at least 3 teams to the playoffs every year and on years like we’re seeing this season 4 teams are a good possibility. For those of you that don’t pay much attention to the NHL or only follow the Flyers if you look around the league as a whole the balance of competition is right there with the NFL if not better. Every point is meaningful in the NHL and as you can see from the standings it’ll be a race to the finish in bother conferences. For those of us who thought the Flyers were a shoe in for the playoffs a few months back guess again because currently they’re in a dog fight against pretty much everyone within their division to hold on to a playoff spot the rest of the way.

This past season NFL season the NFC added to its impressive Superbowl total (which of course the Eagles have no share in ). But let’s face it the Giants squeaked into the playoffs and the division as a whole wasn’t as dominant as years past. The AL East of Major League Baseball tends to be a two team race every season and occasionally has become a 3 team race when the Rays are able to stay on pace with the Red Sox and Yankees. The AL East is one of the top divisions in baseball every season but when only 2 teams dominate year in and year out with a possible third team on occasion in the race it doesn’t compare to the competitiveness brought night in and night out by teams in the Atlantic.

We’re lucky enough to watch the Atlantic on a regular basis thanks to the Flyers but I’ve watched other division teams go head to head in the NHL and other sports. The level of competition and physical play just isn’t there in other divisions around the NHL or any other of the 4 major sports. If you haven’t had a chance to jump into this NHL season yet right now is the perfect time. The Atlantic division will be a race to the end and you can bet once the playoffs start it’ll be well represented in the Eastern Conference Playoffs.

Believe it or not,
I expect the NL East in Baseball to be very competitive this year with the
Phils,Braves,Nationals and Marlins all battling it out and may be one of the closest races in years.. there will be no cakewalk this Season or in future seasons for the Phils as the Nats/Marlins/Braves are improved, have younger talent than the Phils whose window is rapidly closing … These teams still have Core Players in their mid/late 20’s where the Phils don’t (outside of Pence)
Enjoy Citizens Bank Park this Season for it may be a while before the Phils are Playoff contending team after this Season..

What do you mean believe it or not Paulman you f’n moron. The NL East IS going to be the most competitive division in baseball.

It’s been one of the weakest in all of baseball for the last few Seasons
The Mets have been terrible, the Nats continually rebuilding, the MArlins hot and Cold and the Braves.. It’s not been a competitive division for 3-4 Years now…
It will this year for sure.. .