The Flyers Defense Must Tighten Up Before The Playoffs 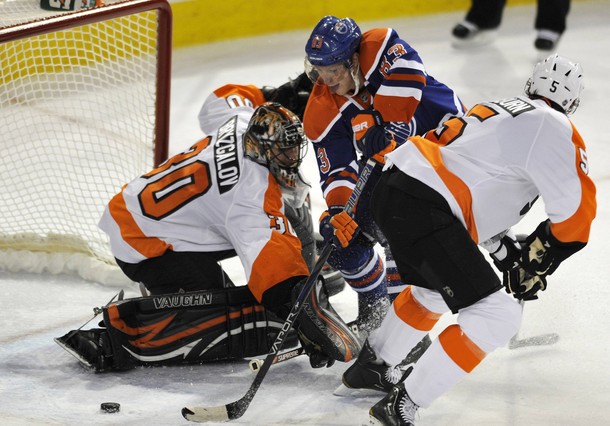 The Philadelphia Flyers have not been good defensively this season.  It hasn’t helped that Captain Chris Pronger was lost for the season due to post concussion syndrome.

The Orange and Black have given up 182 goals this season, which is the sixth most given up in the National Hockey League.  They also give up 2.98 goals against per game, which ranks 27th in the league.  Most people would look at that statistic and blame everything on the goaltenders but goal against per game is a team statistic.

The Flyboys have given up 118 even strength goals, 49 goals on the penalty kill, but have only allowed one goal while playing four-on-four.  The Orange and Black are the only team that has given up a goal while on a five-on-three power play.  The goal was scored because of a bouncing puck and Kimmo Timonen not being in a good defensive position.

The gap between the forwards and the defensemen is too big.  The defensemen will be behind the net getting the puck and the closest forward is at their own blue line.  The defenseman will attempt a pass and it will be intercepted by the opposing team usually resulting in a goal for the other team.

The forwards also tend to be too close together when skating in the neutral zone and the puck gets turned over because they are ready for the pass from their teammate.  Their breakout passes need to be better, and when a shot is blocked by the opposing teams, the forwards need to be on their skates so they can get back to avoid the odd man rush.

The forwards also need to help out in the offensive zone.  When a defenseman goes in to pinch someone need to go back to the point to make sure it’s covered to avoid the odd man rush or breakaway for the other team.  The defensemen need to do a better job staying with their man and not committing to going down for the blocked shot nor going for the fake pass.

If there is a breakdown in the defense then the goalies need to start making the saves that need to be made.  Sergei Bobrovsky and Ilya Bryzgalov have let in soft goals time and time again this season.  At times this season Bryzgalov has looked like he’s committed to the shooter’s move way to early leading to an easy goal, but in the past two games he has been better with waiting shooters out.

The additions of defensemen Pavel Kubina and Nicklas Grossman should help out especially with getting the puck out of the Flyers own zone.  Grossman will also help taking away shooting lanes because he’s not afraid to block a shot and he’s hard to get off the puck along the boards for opposing players.

If the Flyers want to make a deep run into the playoffs then the defense needs to tighten up and the goaltenders need to shape up and start making saves.

It’s Time For The Birds To Send Asante Samuel Elsewhere

Good article Kate..
If the Flyers Defense and Goaltending doesn’t tighten up over these final 20 games, they may not even make the playoffs.. They are currently Seeded #6 with the 3 teams behind them all within 4-5 Points ..

You’ve called out the players, which is fair. Especially our goalies.

But why the pass to the coach on all this? Hockey schemes are highly influential to the overall outcome of a team’s record and statistics. It’s unfair to judge a coach with a whole new team or a short rough patch. I’m not sure this team is completely in any of those categories. But the problems with team defense this year have been consistent all season long. At some point, the coach’s overall scheme has to be called into question.

Yeah, I question Laviolette here…Excuse my ignorance but who coaches defense?…Schemes need some overhaul…And certainly goalies give up far too many soft goals & put Flyboys in the hole way too often.