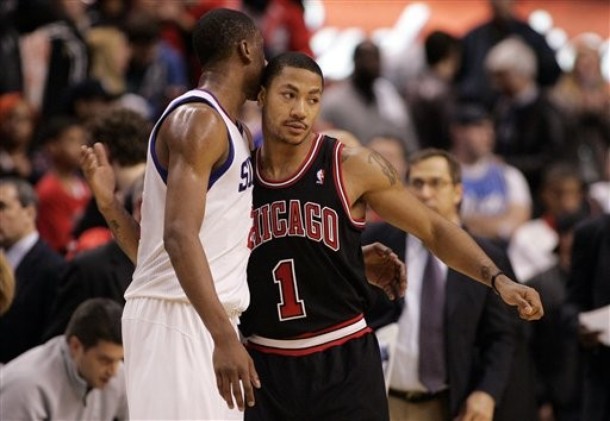 Déjà vu… The Sixers played hard with one of the top teams in the NBA last night only to lose the game in the fourth quarter, something that has become all too familiar in the last several weeks. With two wins in the past nine games I’m wondering what the new owners are going to do with the trade deadline just ten days away.

There is no question that the Sixers have a tough, unselfish team that prides itself on being one of the best defensive teams in the league and that plays hard every night, but it’s just not enough to beat the NBA’s elite teams.

Granted, the Sixers did not have high expectations coming into the season, but I don’t think that’s a good enough reason to just let the season ride out with the players currently on the roster. Philly has some talented young players who could be stars in this league including Holiday, Young and Lou Williams but they need someone now who can take over games in the fourth quarter.

Too many times this season I have seen the Sixers turn the ball over late in the game.  Too many times have I seen Andre Iguodala take a high arching, fade away from beyond the three point line that doesn’t even hit the rim. As good of an all around player as Dre is, I would prefer him to not even be in the game with under a minute left because he ALWAYS seems to take the last shot.

I never would have thought missing Spencer Hawes would make such a huge impact either, and although 14 games may not be enough to measure a players worth, the Sixers were 12-2 with him on the court. I think the two rookies, Lavoy Allen and Nikola Vucevic have played well, but with each averaging under 20 minutes a game and less than 7 points, it’s just not enough to compete with bigger teams in the playoffs.

Not to mention, Hawes may not stay healthy enough to make a big impact when he returns. The Sixers also need to stop giving up so many offensive rebounds to their opponents (Russell Westbrook).

I don’t know where the Sixers would start in coming up with a trade for a big man or for a true scorer in a Monta Ellis or a guy like Paul Pierce who has proven he can take over late in games, something this team desperately needs.

In all reality, the Sixers would have to give up one of their young stars to get another team interested in a trade and I’m not sure the FO is ready to do that. One thing is for sure, if the Sixers don’t make any changes they won’t be making any kind of run in the playoffs this year. At the very least, they have become exciting to watch again.

The Sixers need a superstar? NO WAY! They are just fine with Iguodala’s overrated defense and Evan Turner’s 5 pts off the bench!

Come on Chris Borne, you can’t criticize this Sixers team…..we have ALL STAR IGUODALA! COME ON MAN! SHOW YA LUV!

Where are the morons that were arguing weeks ago? They all dissappeared.

This team is a 32-34 Win Team and will lose in the 1st Round of The Playoffs..
Nothing new to report here.. They started on fire playing the worst teams in the NBA and after the Hawes injuriy, have been a below .500 Team overall as they limp into the Playoffs only to get bounced right out in the 1st Round. .

Another Philly Sports disappointment as Drexel loses the Colonial COnfernce Championship after making a comeback being down by 15 pts most of the game half ending their 19 Game winning streak and now will have to rely on a At-Large Bid which is not a given and may mean having the dreaded play-in game and then facing a #1 Seed right out of the Gate.. A win tonight would have ensured them a Spot in the Big Dance and probably could have been a #14 or #15 Seed for winning the League Title and their Conference Tournament… A major blown opportunity for Coach Bruiser Flint and the Program..

Sixers no get superstar this year…They need someone who can step up crunch time, make big shots…This big time basketball…Who has brains and brass balls on Sixers…Does Collins have brass ones?

Would someone please smack Doug Collins in theback of the head and tell him that this lineup does not work in the last 8:00 minutes of the game.
.
PG Jrue Holliday
SG Lou Williams
SF Andre Iguodala
PF Thad Young
C Elton Brand

Yea Eagles0 — nevermind that it was the MVP of the league right?

Birdo — brandon Jennings just lit him up in Milwaukee

As hard as it is to watch this team at times, i think its best to stick with the squad we have now and make the major moves in the offseason…I don’t thaink you can make a move right now that will get this team deep in the playoff…wait till offeseason then amnesty the thief Brand and trade whoever on this team that could bring a superstar in return. This whole team should be available…I really don’t see what people see in Jrue either, sure he is young but i dont think hell ever be a top 5 PG ever and he gets burned by every PG we face. trade him and more if it gets you a superstar. I would actually like to see Turner play the point

Also if Im Collins I am banning Iggy from taking these step back 15-20 ft jumpers like he is Kobe or sumtin. This guy drives me insane…I don’t get why he doesn’t go to the rim on every p[lay with his strength and agility. To me he knows he cant make free throws with the game on the line which is why he takes this fade aways fom 3 at the end of games…kinda like Lebron…just doesnt have the confidence to make the free throws with the game on the line

BoB, all of the frauds disappeared, like the fraud Sixers fantasy hopes of doing anything of significance. Where are you “show ya love, I told you so” John Hart? I said it before & I’ll say again for the umpteenth time, they are frauds! They will never win anything until they properly rebuild, & get rid of Brand, Iggy & Nocioni’s horrid contracts. They have ZERO scoring threats. They can’t hit a big shot. If they are down late in the game, rack it up as an L. They have ZERO board hogs & are soft in the middle. They are horrid at a half court game. They have NOBODY who can break anyone off of the dribble. They can’t shoot 3 pointers. They don’t get to the line enough & when they do, they are horrid at doing so. Jrue has regressed & is a turnover machine. IGGY is an overrated, overpaid, delusional, DOG. Turner is a bona-fide bust. Brand looks like he is 50. WHY FOR THE LOVE OF GOD IS MEEKS STILL ON THIS TEAM! I can’t stand watching these frauds anymore. IMHO. there are ZERO untouchables on this team. ZERO!!!

They need to get rid of iguodala, he is the bobby Abreu of the sixers

The issue the sixers are having is they dont have another guy to score the ball consistently. If Iggy wanted to be that guy he could be but all he wants to do is score on fast breaks and play defense all game long.. If they had someone other than Lou to score they would be beating these teams,theyre relying on one man to score the ball way too much.. Jrue started out strong than faded late.. Hes getting hammered buy elite/good PGs for the past few games name… Doug is coaching good its these players who are not putting the ball in the hoop, there still playing lockdown good defense holding teams under 40% scoring which is elite defense. They just have to find a way to score the dang ball.. They certainly do miss Spencer Hawes, he started out on fire and this team was feeding off his energy.. I believe he returns next week, wish they could get him back for tmr night bc they have the Boston Celtics coming to town and there revived and playing inspired basketball..

I can’t believe I’m going to say this but, I AGREE WITH BIRDO!!!!!!
Birdo, you know your basketball man!!!!! Honestly, they’ll have no choice but to trade a young player. I would package, Elton Brand, Evan Turner, Nick Vucevic and #1 in 2012, and 2014, also get two other teams involved, to balance the numbers, and add Andres Nocioni, for Dwight Howard, Hedo Turkgulo, and Klay Thompson. In the off- season, I dangle Andre Igoudala, and Jodie Meeks in a trade for more cap room with the Houston Rockets, for their #1 in 2012, Chase Budinger, and the rights to Donatas Montejunas.

Shutup Jon Hart. Iguodala sucks and always has sucked. He thinks hes on the same level as Kobe/Lebron and he’s not even close. The desperation 3 he took against Chicago with two people on him and 5 seconds still left on the clock just made me sick to my stomach.

What was even worse was the fact that I KNEW he was going to do something stupid like that because he wants to be the hero…..always does…..and he’s horrible. If Lebron and Iguodala could switch 4th quarter confidence but keep the same talent, Lebron would be the best player to ever play the game.

You guys want a superstar in town so bad but your not considering what it would take to bring one here. If they try and trade for one they would have to trade everyone. They would be right back to where they were when Allen Iverson was here, one player sucking up the entire teams salary.. If they want to acquire a Superstar, they would have to sign one to a contract in the off season… thats when it would work, not them trading the entire roster away for one player that would hate playing here being that they would have noone around them. The Sixers are forced to wait it out. I doubt they make a move before the deadline, it wont happen. Not many teams will make big trades because this is a shortened season and teams dont want to take any risks when its taken so long for teamsd to gel.. so dont expect many deals, and i doubt the sixers make any moves…

For the Record, there are only about 7-8 Superstars in the NBA that can carry a team and win games by themselves on a consistent basis….
Kobe, Rose, Durant ,Wade, LeBron,Nowitzke,C Paul & D Howard ..
Am I missing any.. With 32 teams and almost 400 NBA players, it’s not like these type of Players are growing on trees..

No player wins games by themselves in the NBA!

Ok, maybe not win the game by themselves, but take over in clutch time to give your team a good chance of winning would be a better way to put it..

It’s not even the problem of having a superstar, they don’t even have good players. They are mediocre-solid players, thus the team being a 500 mediocre team. Damn, I’d settle for solid-good, positional players right now. They have too many tweeners, with no real position, Mr. Softies at the 4 & 5 positions, & nobody that can sink a shot. Period, end of story! Stinkadala is a flat out stink bomb! Brand looks like he is an AARP member, Turner is a bust, & Meeks should never see the court again.