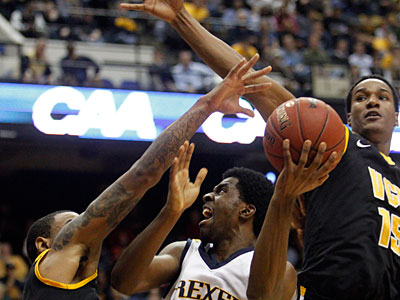 A 16-point halftime deficit proved to be too big of a mountain for the Drexel Dragons to climb as they fall to Virginia Commonwealth in the CAA Championship game 59-56.

The Dragons were able to mount a comeback in the second half led by freshman Damion Lee’s 20 points, and had a chance to tie it and force overtime in the final seconds but junior Chris Fouch’s three pointer rimmed in and out.

Due to the loss the Dragon’s are now at the mercy of the NCAA bracket committee, the Dragon’s 19 straight wins prior to tonight’s loss should help them, but the team’s low RPI is going to hurt Drexel despite its 27-6 record.

Drexel may not go to the NCAA tournament every season but the team is set up to make a run at the field of 64 the next few seasons. Drexel is only going to lose power forward Samme Givens at the end of the 2012 season, the rest of the Dragon’s will return next season a year older and at the very least with NIT post season experience.

The question at hand now is does Drexel deserve to be in it. They won 19 straight, and finished the season 25-2 after starting 2-4. The Dragons first 6 games were played at neutral sites or on the road, the team also fought through injuries in that time frame, the committee may take that into account, but how much will that be factored in, is anyone’s guess.

Drexel fans point to team’s from bigger conferences on the bubble like a North Western who is 18-10 but is 8-10 in the tough Big- Ten and ask the question is it fair for North Western to get in over Drexel?

Drexel could prevent this RPI issue in the future if the school would add to its schedule one or two more tough games each season, Temple is just a ten minute drive away from the Drexel campus, that would be a good start.

If the school misses the tournament, they can only blame themselves, which is a shame because the team is loaded with good kids who have earned the right to have a chance to play in the tournament. If Drexel ends up in the NIT, instead of the NCAA’s the player college basketball fans should feel  the worse for is Samme Givens. Givens who is just 6’5, put together a tremendous career at Drexel, over-came his size at his position to become only the third player in Drexel history to record 1,000 points and rebounds.

He is the type of kid Philadelphians root for, hard working, respectful, and appears to be grateful for any good fortune to come his way, after the team clinched at least a birth in the NIT he was filled with excitement.  The rest of his teammates should be back in the CAA championship next March,  in the long run Drexel is in good shape, but short term last night’s loss could prove fatal.

Has This Sixers Roster Maxed Themselves Out?

A great Season but a missed golden opportunity.. Probably NIT Bound…
The Colonial Conference should get at least 1 At-Large Bid (which would be Drezel) but now they have to wait it out and see how all these other teams and Conference Championships go..

I was with you throughout the article until this line:

“Drexel could prevent this RPI issue in the future if the school would add to its schedule one or two more tough games each season, Temple is just a ten minute drive away from the Drexel campus, that would be a good start.”

So why won’t Temple hop on the bus and travel 10 min? They played a road game at Towson a few years ago. I said Towson.

Have you seen Drexel’s schedule since Flint took over? SOS generally runs 100-140, not bad for a mid-major. That means there are 200 teams with worse SOS.

This year’s SOS is an exception and that is because the opponents mostly had down years- (Paradise Jam opponents, Bradley and the bottom half of the CAA really hurt the SOS.)

What is your solution to a team that no one will play on equitable terms? Is one game at Temple and the return at the Palestra fair? NO ONE plays at the DAC except St Joe. And it’s not like they set the world on fire.

DU could do the buy in thing where you get paid a sum just to lose. Many schools won’t do that with Drexel after seeing what Drexel did to Nova, Syracuse and Louisville. Plus if you play too many of those, you will get hardly any OOC home games.

Also DU is hurt this year by conference SOS. The top 4 teams in CAA can play with anyone, but the bottom 6 were just awful. No control who you play in conference,

SOS may be a valid reason to keep DU out, but don’t say they don’t schedule quality opponents because this year ended up the exception.