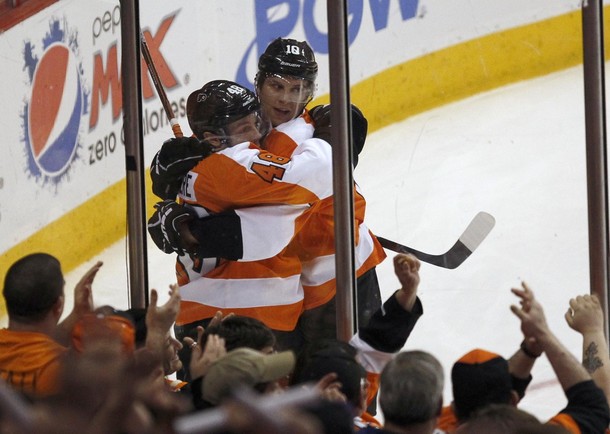 When the final horn sounded at the end of last night’s 4-1 win over the Montreal Canadiens, the Philadelphia Flyers had officially clinched a playoff berth. Looking back at how this team came together, it’s a credit to the organization that the club has remained just as competitive as it’s always been in spite of a major overhaul. The 201-12 NHL season marks the 16th time in 17 years that the Flyers have made it to the postseason.

Looking forward, the final positions are not set in stone. The Flyers currently sit in fifth place with 96 points while the Pittsburgh Penguins (98 points) and New York Rangers (101 points) remain ahead of them.

The most likely scenario is that the Flyers will finish either 4th or 5th, meaning that their opponent in the first round will be one of those two Atlantic Division rivals with the home ice advantage currently undecided.

While neither situation is “desirable,” the advantage of facing either club early is that we will find out very quickly whether this team has a legitimate shot of competing for the Stanley Cup. The Quarterfinal Series against the Buffalo Sabres in 2011 was a good example of how neither team at that time was really built for a long run, and the sweep at the hands of the Boston Bruins was brutal.

On paper, the preferred opponent in the first round is the Pittsburgh Penguins. The Flyers have faced them just four times this season, with the final two games to be played in April. The record stands at 3-1-0, with the Flyers outscoring the Penguins 14-12.

The record against the Rangers, unfortunately, is 0-5-0 and the Flyers have been outscored by a margin of 19-8. The two clubs face each other one more time in April as well.

As most sports fans (and particularly hockey fans) realize, season-long records don’t have quite as much relevance as the state of the team heading immediately into the postseason; that is, which teams are “hot” and which teams are stumbling in. The Rangers are 5-5-0 in their last ten games and 10-8-2 in their last twenty. I wouldn’t necessarily say they are “stumbling,” but the team isn’t dominating as completely as they had been all season.

The Penguins, on the other hand, are 8-1-1 in their last ten games and 16-3-1 in their last twenty games. They are playing their best hockey of the year at the right time and have the added bonus of Sidney Crosby back in the line-up.

The focus at this point for the Flyers should be to get all four offensive lines rolling and tighten up the defense. It’s great that Danny Briere has finally scored on a goaltender again, having hit the net twice last night. Scoring on the back-up goaltender for the last place team in the Eastern Conference, however, should be a given.

The team also gave up way too many breakaway opportunities against the Canadiens, a trend that needs to stop immediately.

The Flyers have a relatively easy week of games starting on Monday with the Tampa Bay Lightning (11th place). They face the Toronto Maple Leafs (13th place) on Thursday before welcoming the Ottawa Senators (7th place) on Saturday.

Loss Of Chase Utley Not The End Of The World

I love this team. Paul Holmgren has done a good job refreshing what had become stale overnight. I love the addition of Grossmann to this team. It is just a shame that mezaros(sp) and Pronger arent able to add their talent. If Bryz can stay hot this team has a real shot to hoist the cup.

Any chance they trade Bob to toronto for Schenn this summer?

I’d rather see them play the Rangers in the playoffs right now. NY is stumbling, Pitt looks on fire and I want revenge against the Rags asap.

I think there’s a legitimate shot Bob gets traded in the summer, but it’s too early to tell. Toronto doesn’t need a young goalie as much as they need a veteran to support James Reimer.

I’m split on whether I’d like to see the NYR or PIT. Both have their pros and cons. The final games this season will provide a better picture.

Playoffs will depend on defense & Bryz…Giroux & Briere will need to step up big-time and we will see what the kids are made of.

If Bryz keeps playing the way he has, the last couple of months, the sky’s the limit, but we need to start scoring. 1-2 goals a game isn’t going to get it done. Thank God, that there isn’t a shootout in the playoffs!

The Rangers are not playing as well, but they still have Lundqvist. I don’t want to see them or the Bs (who I know they want get in round 1). Both of those teams have all world goalies that can steal series. Fleury is good, but he is not that guy. Those plus the Flyers scoring woes of late and I would rather have the Pens.