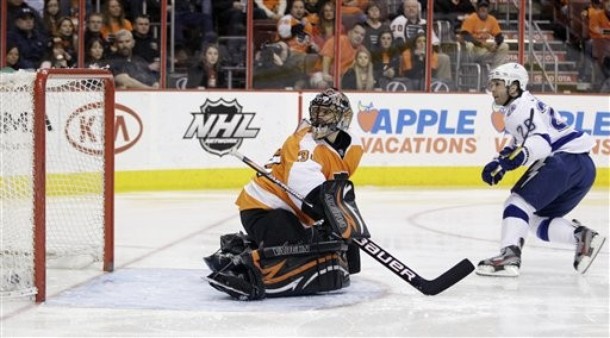 As the hunt for home ice advantage in the playoffs continues, the Flyers lost a valuable two points tonight against the Tampa Bay Lightning in a 5-3 loss at the Wells Fargo Center. The team dominated for stretches at a time, but all it took was a handful of complete defensive breakdowns to seal their fate.

The first period could best be characterized as disorganized. The Flyers had moderate control of the game in the early stages, outshooting the Lightning 4-0 in the first five minutes, but a powerplay opportunity off a Brett Connolly tripping minor led to disaster. Danny Briere, PGW’s “hot player of the game,” got caught being cute with the puck in the neutral zone and gave it up to forward Ryan Malone. He didn’t appear to realize he was the last man back, and Malone scored on the ensuing breakaway.

Briere was unfortunately called for an interference penalty with 5.4 seconds remaining in the period, enough time for eventual Rocket Richard trophy winner Steve Stamkos to put the Lightning up 2-0. Sean Couturier, tasked with shutting down Stamkos for the evening, lost the face-off and then couldn’t get his stick in front of the puck quick enough.

It’s worth noting that the Flyers won just 36% of the face-offs through the first period and finished the game winning 54%. Couturier finished 12-for-24 on face-offs, an area he has struggled with in his rookie season.

Wayne Simmonds made it a game at the 3:21 mark of the second period, re-directing a pass from Brayden Schenn that shot past goaltender Dwayne Roloson like a bullet. It’s amazing how much different the Flyers looked after that goal, but it ramped up the compete level tenfold.

The puck danced in the crease all throughout the period as the Flyers sustained pressure in the offensive zone. Finally, Kimmo Timonen skated in deep and slid the puck across the crease to an advancing Matt Read, who finished it while being simultaneously knocked down. It marked the 400th career assist for Timonen and the 22nd goal for Read this season.

The Flyers held the Lightning to just two shots in the second period and six shots in the third. If you factor in blocked shots and missed shots, the Flyers led the game by an 81-29 margin.

A good offense needs good defense too, though, and defensive breakdowns continued to plague the team in the third period. An outlet pass from Tim Wallace to Martin St. Louis escaped Pavel Kubina, allowing for yet another breakaway goal.

A mis-play by Matt Carle closed the door on a comeback as a turnover led straight to a goal by, of all people, J.T. Wyman. Carle will be getting a lot of heat for the goal against, but it’s worth noting that he made a spectacular save in the first period on a shorthanded breakaway before Briere inevitably did. He also took all the blame for the loss, according to Tim Panaccio of CSNPhilly.

Scott Hartnell cut the deficit to one with 1:13 remaining, but Tom Pyatt scored the empty netter for the final goal of the game.

Sam Carchidi of the Philadelphia Inquirer reported after the game that Ilya Bryzgalov was seen “limping badly,” and had taken x-rays after the game. Paul Holmgren also suspiciously announced that, while Bryzgalov isn’t hurt, Sergei Bobrovsky will start on Thursday against the Toronto Maple Leafs.

Never mind the fact that Bob hasn’t played more than two games since February 18; anyone who has ever listened to Peter Laviolette speak knows that he refuses to name his goaltenders before the day of a game. If the general manager is saying who is starting next game, you can bet something is wrong. Hindsight is 20/20, but hopefully Bob isn’t too rusty after riding the pine for so long.

Should Bryzgalov need the rest, now’s the time to take it. The team has clinched the playoffs and needs him to be at 100% by the time mid-April rolls around.

Reports: Eagles To Be Visited By DT Brockers And Two CB’s