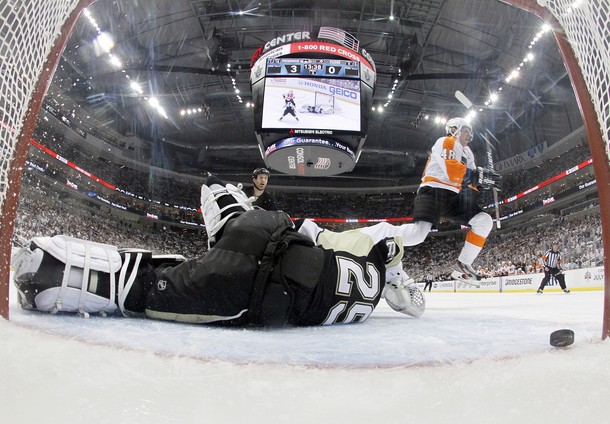 Nobody said it was going to be easy.

Unfortunately, the Flyers didn’t make it easy on themselves in Game 1 of the Stanley Cup Quarterfinals against the Pittsburgh Penguins as they handed them a three goal lead.

What would be an insurmountable lead for any other team in the NHL wasn’t enough to phase the Flyers, though, as they scored four unanswered goals on their way to a stunning overtime victory.

Sidney Crosby, of all people, got the ball rolling just 3:43 into the game after muscling away from Braydon Coburn and firing a loose puck over the shoulder of goaltender Ilya Bryzgalov.

Tyler Kennedy padded the lead four minutes later on a two-on-one. Defenseman Marc-Andre Bourdon was fast enough to get back in time after pinching in the offensive zone, but opted to cover Andreas Lilja’s man instead of following the trailing Kennedy.

Pascal Dupuis scored a controversial goal in the waning seconds of the first period after an icing was waived off at the last second. Dupuis threw the puck in front of the crease and it bounced off defenseman Nicklas Grossmann past Bryzgalov.

Perhaps to even their mistakes, the officials allowed Danny Briere to launch into a breakaway in the second period in spite of being two feet offsides. Briere drew Marc-Andre Fleury into a poke check and lifted the puck over him.

The Flyers settled a bit after the first period, but giving up a lead in the first five minutes continued to be their kryptonite. The Penguins were able to generate many more scoring chances and all the Flyers could do was contain them.

Briere, reminding the world why he is playoff gold, scored his second goal of the night on a much more impressive goal. Corralling the puck from the corner, Briere fired a low puck at a sharp angle past Fleury, who was screened perfectly by Crosby.

Briere was ridden into the boards shortly thereafter by Brooks Orpik, doing his best Matt Cooke impression. It was the first powerplay of the game for the Flyers; the Penguins had three by that point of the game.

It was all they needed, though, as Brayden Schenn redirected a shot from Scott Hartnell to tie the game.

The Flyers carried the momentum with them into overtime, and thankfully for those of us who have jobs tomorrow, Jake Voracek scored 2:23 in as Jordan Staal misplayed the puck in front of Fleury.

Bryzgalov may not have had a great first period, but he was key in the remaining forty minutes of the game, turning away 25 of 28 shots. His teammates helped him out by blocking 16 shots as well. By comparison, Fleury stopped just 22 of 26 shots and Pittsburgh blocked 19 shots.

Coach Peter Laviolette made a decision to play Bourdon in lieu of veteran Pavel Kubina, a decision that, in hindsight, was probably not the right call. Bourdon is much quicker than Kubina but doesn’t have the experience to draw from. A late upper body injury to Bourdon that forced him from the game will help Laviolette make a decision for him, as Kubina is likely to play on Friday.

Brayden Schenn played a monster game with a goal, two assists and four hits. Schenn appears to be establishing himself much like James van Riemsdyk did in last year’s playoff series against the Buffalo Sabres. If he can elevate his game along with Briere, the Flyers’ second line will be dangerous enough to throw off Pittsburgh’s match-ups.

In 6:23 of ice time, Zac Rinaldo still managed to find his way to the penalty box. He had zero shots and one hit in that span. I don’t mind him being in the line-up, but you have to think the team would be at less of a disadvantage if they swapped him for Harry Zolnierczyk.

Great win by my boys, briere does it again, another clutch playoff goal. The shocked the hockey world with this win! Im proud of these guys beating them in Pittsburgh, what a gutsy guytsy win. This team may have staying power. Mark my words, if we win this series were going to win the stanley cup plain n simple..

great night last night, improbable comeback, Phillies get the snide off the back with solid hitting for a change, chase Marlins ace, top it off with three in a row from Sixers, things looking better

Huge comeback and win, watched game on NBS SPorts/Versus which televises every Playoff Hockey game.. SHowed a lot of heart and kept playing and kept th epressure up.. Now the Series is wide open with momentum to the Flyers who can play with house money and real loose in Game 2 in PIttsburgh and see what happens… Goalie Bryz and team started off slow but made some nice saves in the 2nd Period to keep them in it and became more confident as the game went one.. Pens Defense is a little slow and not very Physical so the Flyers need to keep attacking and keep putting pressure on that Pens back line and they will have a great chance of upsetting the Pens..

Schenn’s coming out party last night. Dude was everywhere on the ice last night. JVR may never get his spot back.Couturier played really well last night too. And what can you say about Danny B? Dude just turns it in the playoffs.

That was one of the worst officiated games that I have seen in a long time. Briere was clearly off-side, it looked to be icing on the Pens 3rd goal, Crosby drew penalties diving and they were just short of murdering Giroux with no calls. Wonder if the no calls will continue in game 2.

On a side note, did you see what Shea Weber did to Zetterberg at the end of the game? Grabbed his head and slammed it into the glass. Gotta think a suspension is coming for that. Could be crippling to for the Preds.

Philly is in pitts heads. They are too worried about after the whistle stuff and not to mention have not won a meaningful game in Pitt since moving to the new rink. And bryzgalov is going to surprise.

Bryz has the mojo back, watch out, this will be the greatest flyers season ever

I admit it was a fantastic game. With a fantastic outcome. However, we can’t just assume the Penguins are gonna roll over and play dead. They are gonna come out pissed and more relentless. If we could some how pull out a win tomorrow, then I will get excited. But right now, I am keeping my head on tight. This Pitt team is way too dangerous.

Another huge game tonight against a Pittsburgh team that wont just lie down and take it. There gonna come out a fight. I hope the flyers are gonna be ready for the onslaught. What the flyers need to do is come out and be the aggressors early, come out and punch them in the mouth first. We cant afford to have the penguins get that kind of lead again. They may not relinquish it this time.. if the flyers win tonight, they will be in control of this series and may sweep these guys.. im all flyered up!