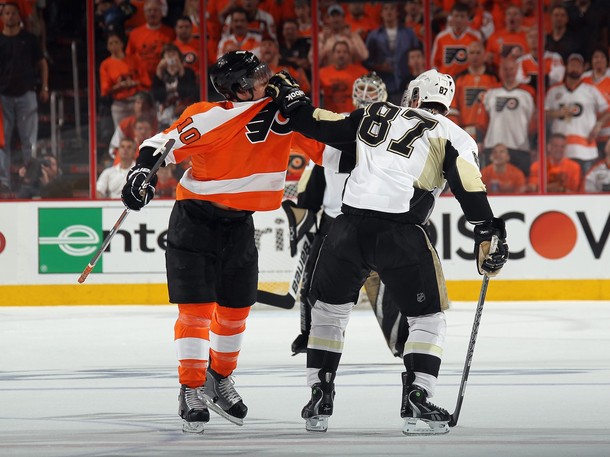 The Pittsburgh Penguins entered Game Three of the Stanley Cup Quarterfinals knowing that they needed to gain some ground on the Philadelphia Flyers if they wanted to make it out of the first round. Between the hole they dug themselves in at home and the already tense rivalry with the Flyers, there was every reason to believe this game was going to be chippier than usual.

It didn’t even take one period before the officials completely lost control of the game.

Early shoves traded between Zac Rinaldo and Deryk Engelland resulted in four-on-four hockey that Jordan Staal was able to capitalize on. The Penguins were not only applying heavy pressure and outshooting the Flyers, but a questionable high-sticking penalty to Jake Voracek gave them another powerplay.

In spite of the advantage, the Flyers responded as they have all series to this point.

Max Talbot scored shorthanded at the 6:44 mark on an odd bounce that somehow eluded Fleury. For as “soft” as Bryzgalov’s stop was, Fleury’s was even worse.

The key for Pittsburgh to come back in this series was getting their star players to focus on what they do best- scoring goals. It’s not as if Bryzgalov had been playing “lights out” to this point in the series.

Unfortunately for Pittsburgh, though, they lost their composure early on and attempted to draw the Flyers into physical game that didn’t play to their strengths.

The first melee broke out immediately after Talbot’s goal with pairings of Claude Giroux/Matt Niskanen, Talbot/Paul Martin, and, of all people, Matt Carle/Matt Cooke.

Once the ice shavings settled, the officials called Niskanen and Giroux to the box but gave an extra penalty to Niskanen. Less than a minute later, the officials followed up with a weak cross-checking call on Kris Letang. Flyers head coach Peter Laviolette opted to use his time-out to motivate his players to take advantage of the 5-on-3 situation.

Danny Briere, “Mr. Playoffs” himself, did just that, calmly shooting top shelf thanks to a crisp pass from Scott Hartnell.

Briere tallied his second of the night (and fourth of the playoffs) at the 11:45 mark after collecting a great outlet pass from Wayne Simmonds.

The “pot boiled over” shortly thereafter, as Sidney Crosby took a few extra whacks at Bryzgalov after the whistle and drew the Flyers’ ire. Again, if you’re Crosby, this is how you have to play- take the couple of shots and hope for the puck to come loose, but know that you’re going to get a facewash from some Flyers, and then move on.

Instead, Giroux and Crosby had words that spilled over into a fight. Crosby made another puerile gesture by batting Voracek’s glove away on the ice, at which point Timonen stepped up to defend his teammate. Moments later, Timonen found himself fighting with Kris Letang (a fight in which he lost badly), and both defensemen were subsequently thrown from the game.

The bad blood continued to spill over just a few shifts later, as Brayden Schenn finished a clean hit on defenseman Paul Martin and Arron Asham immediately followed up with a cross-check to his face. While Schenn was on the ice, Asham threw yet another punch to his head. Schenn inexplicably earned a charging penalty from the hit on Martin, but Asham was called for a match penalty and ejected from the game.

“As far as Asham, I really haven’t seen too much of a replay, but I think he gets him in the chest area… gets pushed up in… further up, so.. it’s … [inaudible]… I’m sure they’ve already been looking at the situation,” said coach Dan Bylsma, when asked about the hit.

James Neal cut the Flyers’ two goal lead on the four-on-four that played out between Schenn and Asham’s penalties, but Matt Read brought it back just 23 seconds later.

The second period was not nearly as violent as the first, but the losses of Timonen and Letang weakened already suspect defenses for both teams. Both Neal and Read each scored their second goals of the game midway through the period on powerplays.

Jordan Staal and Wayne Simmonds also scored in the second.

Pittsburgh Penguins coach Dan Bylsma pulled Fleury after the second period in an attempt to stop the bleeding and wake up his team, but it would prove fruitless. Jaromir Jagr, shielding the puck from the Penguins’ defense close to the crease early in the third period, fed it back to Giroux who then scored on back-up goaltender Brent Johnson. It was the first shot he faced.

With the game under wraps at 7-4, it would have served the officials well to call the game as tightly as possible to prevent any more mischief on the ice. Instead, the Penguins continued to unravel and resorted to multiple attempts at headshots and dirty hits.

Neal astonishingly avoided getting thrown from the game after running Sean Couturier away from the puck with a blatant elbow to the head and then running after Giroux with the same hit on the very next shift.

Crosby attempted to pull Hartnell away from Neal following the hits, but it only resulted in Hartnell shoving #87 at the Penguins’ bench and fourth liner Craig Adams running in to protect his captain.

By the time the game was over, 133 penalty minutes were doled out between the two clubs.

“I think with the way the game was called, there was a lot of extracurricular activities during and after the plays,” said coach Dan Bylsma. “That’s an area of the game we want to stay away from. We don’t want to be involved in those situations against this team and we want to stay whistle-to-whistle and minimize the number of penalties in the game, not create those scenarios… but emotions are high and you saw it numerous times tonight spill over from both teams.”

Max Talbot added an insurance marker to end the game 8-4 for Philadelphia.

It will be interesting to see how the NHL responds to this game, if they do anything. There is certainly an argument to be made for Asham, Neal, and Adams missing Game Four. I wouldn’t be surprised if Pittsburgh recalls enforcer Steve MacIntyre for Wednesday.

Byslma did make one commitment: “I have not talked to him, but Marc-Andre is playing in our net in Game Four.”

Laviolette was asked in the post-game press conference if his team had an advantage in knowing what it’s like to play a team down 3-0 in a series, alluding to being in that situation in 2010 and 2011 against the Boston Bruins. “My team? My team hasn’t been down 0-3.”

“Some of the players on the team have.”

Game Four starts at 7:30 p.m. on Wednesday at the Wells Fargo Center. The Flyers will have a chance to clear the first round with another win and gain some much needed rest as they continue their quest for the Cup.