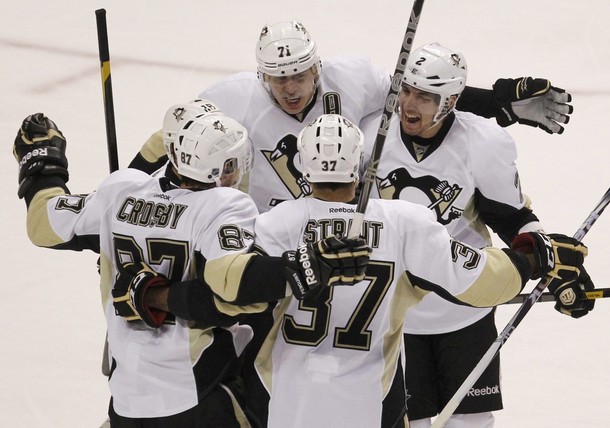 The Philadelphia Flyers had a chance to sweep the Pittsburgh Penguins in the Stanley Cup Quarterfinals. This was a team without superstar James Neal and grinders Arron Asham and Craig Adams. All they had to do was play a modicum of defense and they should have, on paper, been able to squeeze out a win to close out the series.

Instead, they buckled like wet paper bag, losing to the tune of 10-3 in their worst home playoff game loss in franchise history.

Following the free-for-all that was Game Three, referees Chris Lee and Wes McCauley called a tight game to make sure that no one went out of control. The Flyers, unable to adapt, were called for eight penalties excluding the forty-eight penalty minutes earned to Zac Rinaldo, Pavel Kubina and Wayne Simmonds in the second half of the game.

Don’t be surprised if Rinaldo is suspended for one to three games with a hit similar to Asham’s on defenseman Zbynek Michalek. One would think that, after Game Three and during a game that was being called very close, he would know better than to play like a scrub. I asked before this series started if Rinaldo is too much of a liability. Well, now we know.

It was as if the team completely forgot hockey 101. Matt Read and Matt Carle were each abysmal, responsible for at least half of the ten goals against. Ilya Bryzgalov was at fault for three of the first five goals he allowed, and seemed to have trouble with both his lateral movement from post-to-post and his rebound control. After being pulled in favor of Sergei Bobrovksy, the defense was just as nonexistent in his absence.

According to Adam Kimelman of NHL.com, the last team to score double digits in a playoff game was the Los Angeles Kings, who beat the Calgary Flames 12-4 on April 10, 1990.

The only “good” that can come from this complete embarrassment of a hockey game is the message sent that the way the Flyers have been playing in the Quarterfinals to date will not get them far, if they do in fact close out this series.

Hopefully the humility of being responsible for this garbage in front of their fans will wake them up in Game Five on Friday in Pittsburgh and help them build onto being something more than being just an offensive juggernaut.

The Outlet pass by MAtt CAryle when no one was on him right to a PEnguin at the BLue line which made it 6-3 was the game late in the 2nd Period..
Carlye come from around his own net passes right up to the blue line when both FLyer Forwards had his back to him and were rushing up to the neutral area.. Why he didn’t skate up is beyone me, he just passed it up aimlessly to no one except to a Pwnguin Defensemen who passed it back down low to which lead to another pass to a shooter right in the slot all alone for a goal and in ended the game in my opinion…

This may be the worst defensive Playoff Series of All-Time from both Team and I see very little chance either squad has in future rounds of the Playoffs against better,more disciplined Defensive Teams which the NY Rangers,Bruins, NJ Devils and evern Ottawa have over the Flyers & Penquins..
Turnovers, wide open players with point blank shots, little blocking out.. The Goalie play has be below par too from both sides..
It’s been a fun series to watch as far as the up and down play, lots of goals and of course fights, but neither Team has displayed any discipline or real team defense of any sort and is not indicative of Playoff Hockey that I have come to enjoy and watch.. Maybe they can turn it that solid Defensive Hockey in the next round, but they are what they are..

Game was over when NHL sent calls to all teams/refs yesterday to change the way the games called. 12 power plays in the Ott/NYR game, including Ottawa opening with 3 incredibly ticky-tac calls against, Pitt/Philly basically entire first 2 periods on PP.

On PP pens skill able to easily exploit Flyers weakness on D and esp in goal.

Similiarities between Flyers and Eagles are striking. Both weak in most important position on the field/ice.

Doesn;t matter how good the team is if it has no faith in goaler. This has been a glaring prob for Flyers for several seasons….unadressed. Unfortunate for Flyers fans to watch talented teams fizzle with Red Light Raciot clones in net.

(how similar to Eagles under Vick regime??)

Had opportunity to trade for Tim Thomas 2 years back. Didn’t. Even after they win this series, they’re not going anywhere with 2 seives in net. (BTW – I am not Flyer fan, just telling it as it is)

I don’t think I’ve ever seen, such a bunch of slow lumbering sloths, on a DF corp in my life. Lilja & Kubina are turnstiles & should not be playing. Carle is a TO machine. Coburn is absolutely invisible & Timonen is starting to look his age. We also, get ZERO offense out of the entire corp. It’s not even debatable. Bryz looks like he is playing like a one legged Ray Charles. WTF! It’s taking him a year to get from post to post, his reaction time, looks like it’s in slow-mo & seems like he isn’t seeing the puck. While I like a lot of goals, this series is ridiculous. BTW, when is Jagr, Simmonds & Hartnell going to do something. Other than Jagr & Simmonds 1 goal apiece & Hartnell getting his hair pulled, they have been non-factors. I still think we win this series, but regardless of the outcome of our playoff run, this DF corp, needs to be priority #1, for Homers hit list. The only one’s that deserves to be back is Grossman & Andrej Meszaros. Pronger is finished. Timonen isn’t far behind. Lilja & Kubina are sloth’s & wastes of space. Carle won’t be back, unless they can trade non-factor Coburn (I hope). So that’s 6 we have, under contract-
Pronger($4.9M), Coburn($4.5M), Grossman($3.5M), Meszaros($4M), Timonen($3M), Lilja($1.7M). That’s $21.6M cap hit of injury & mediocrity. Pronger can be put on LTIR after the season starts. Lilja can be hid with the Phantoms. Carle & Kubina are free agents. IMHO, Coburn needs to go, ASAP! So we’ll need 3 more DF. Rehash the trade for Van Riemsdyke for Luke Schenn. Sign Weber, no matter what. Let Gustafsson, Bourdon, Manning & Lauridsson fight it out for 6 & 7 spots. It has to get done. I can’t take a DF anymore, that gives you no offense, mistake prone & skaters like they’re in sand. I love the way Homer has rebuilt the Forwards with the quickness. The same can be done with the DF. No balls, no glory!

Series may be over. Wouldnt surprise me one bit to see Fluerry play lights out from here on out and the Penguins win the next 3. Bryz is simply terrible. Even in the wins the Flyers won in spite of him. Once the momentum of a team starts we all know its tough to reverse. When that 1st soft goal goes past Bryz on Friday he will be done. The Flyers may be in trouble.

Boy, what a difference one game makes to you so-called Flyers fans. All that matters is the score at the end of the game. And three out of the four games played, the Flyers have been on top. We were still in the game when Lavi pulled Bryz and I knew at that moment we were done. We should have stuck with him like Blysma stuck with Fleury. He is our goalie. And Bobrovsky sure proved why. Also, don’t forget we own the Penguins on their home ice. Flyers win the series on Friday. And then nobody knows what will happen from then on. Wait to complain about them until they are in actual trouble in a series for christs sake.

The debacle last evening really means nothing, in fact it may atually help the team to remain focused and to attone for such an embarrasment and come out Friday and play their best all-around game of the Series.. You never know about mommentum changes in any type of Playoff Series.. Flyers have lots of youth, but they also have some Veterans (Briere,Jagr,HArtnell,Timmomen) who are not going to panic. The area I have been concerned with moving forward is the play of the Defensive Unit as a whole.. They just make too many unforced errors and get caught out of position too often.. MAybe a little humble pie will be good for the Team and come out smokin’ for Fridays game

numberoneeaglesfan, nobody was saying they were in trouble. I was just stating FACTS. I still think we win today, but that doesn’t change the FACT that our DF is putrid & horrid, & Bryz is still hurt & has reverted back to his lost self, from the beginning of the year. If you can’t see that, that is so evident by their play, then my friend, your nuts. Like I’ve stated sooo many times, to the blind step-ford fans on here for OUR teams, ZERO teams/ players are exempt from criticism, evaluation, or being ripped. And just because some of us have the brains, balls & frame of mind, to call it AS IT IS, doesn’t make us SO-CALLED FANS!!! I love all of my 4 teams & wan’t them to win every year. So don’t call into question my fandom! I call it as I see it. I don’t know about anyone else, but I don’t like my goalies giving up 4-5 goals a freaking game, with a save % of 84% & Defense-men, that give you ZERO offense & are turnover machines, that skate like 80 year old quadriplegic’s. That’s absolutely, unacceptably, pathetic!!! If the truth hurts you, I don’t give a rats arse!