Bryzgalov Hung Out to Dry by Flyers in Game Four Loss 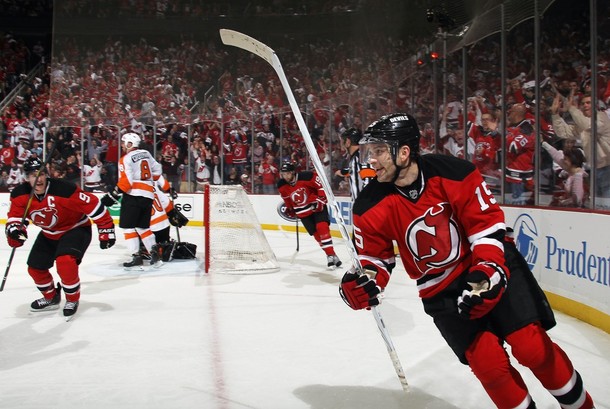 A win in Newark would have tied the Stanley Cup Semifinals series for the Flyers and given them some breathing room in the remaining three games.

Ilya Bryzgalov followed up his play in Games Two and Three with yet another great performance, but the team in front continued to sputter. With virtually no offense and shoddy defense, the New Jersey Devils easily took Game Four and a choke-hold over the series.

Claude Giroux, invisible in the past two games, was a force in the first period. His shot during an early powerplay was redirected by Scott Hartnell past Martin Brodeur. Giroux followed it up less than two minutes later with a shorthanded goal that started as a rush by Max Talbot.

Up 2-0, the lead was short-lived.  Petr Sykora put the Devils on the board while Andreas Lilja sat in the penalty box on a tripping minor. Marek Zidlicky tied it before the buzzer sounded of the first period, left alone in front when James van Riemsdyk shirked his defensive responsibilities.

The Flyers generated just seven shots on goal in the first period, but this was excusable by scoring on two of them. They could only muster fifteen shots in the next two periods, though, while the Devils’ relentless fore-checking threw 43 shots on Bryzgalov throughout the game.

Dainius Zubrus was left alone in the front of the net after Braydon Coburn missed his coverage and beat Bryzgalov up high. Just as a poorly executed line change cost the Flyers Game Three, simple defensive gaffes cost them Game Four.

The Flyers also took five penalties in the game, including a blatant head shot from Giroux to Zubrus after he was frustrated by the lack of a non-call earlier on his shift. While Zubrus has some culpability in having his head down, Giroux’s gesture was uncalled for. He may avoid additional disciplinary action because Zubrus was not hurt on the play and he received a minor penalty for the incident, but it’s the type of cheap shot that Evgeni Malkin took in the last series that infuriated Flyers fans.

For the Flyers to bounce back at all in this series, they’re going to have to improve on their defensive proficiencies by leaps and bounds. It’s been mildly comforting watching Bryzgalov hold the fort, seeing that he is capable of winning a playoff series over the next eight years of his contract, but the defense has left a bitter taste for the second year in a row.

Game Five begins on Tuesday in Philadelphia.  With their backs up against a wall, the Flyers must delve into their underdog persona if they have any hope of a Game Six.

JJ, you can stick a fork in them. They are playing like they are on a constant penalty kill. It’s disgraceful & embarrassing. Jagr, Simmonds, Hartnell (even with the goal) & our entire Df corp are nonexistent. Also they are relying entirely too much on all of the kids. None of the veterans have stepped up in the entire playoffs except Giroux & Briere on occasion. They have no answers for the Devils back checking, fore checking & their cycling of the puck. It’s embarrassing to watch. It’s unbelievable that Bryz is playing his balls off & we are scoring first, but are still getting dominated.

Agreed DCar. NJ seems like they are on a constant power play.Ive never seen anything like it. Its like men playing against boys. They Flyers look to slow and to weak. They have been exposed. They arent even close to winning a cup. But hey they get a free pass as usual.

Not from me they don’t. No one is off limits, if they stink. LOL!

Ive never seen such uninspired hockey in the playoffs in my life! They arent even hustling to the puck in the corners, just gliding along! Simmonds and jagr seem to be the biggest offenders, just standing there watchin battles, no backcheck.

When Flyers are on Offense, I’ve never seen a Defensive Corps as a group be unable to keep the puck in, almost ever pass back to the point get’s fumbled or loose puck ends up coming out of the Flyers Zone..
When Flyers Defense is in their own zone, this group is terrible at positioning and passing the pucks out cleanly up to the forwards.. everything is up along the boards and even uncontested outlet passes eneded up being on Devil’s stick’s half the time…. Brutal..

Does anyone else think the Coach Lav needs to go…
I think 3 years has been plenty, It appears that he has to use a Time-Out almost every game just to get this Team focused to start a game…
He has had 3 years to improve his “system” and I just don’t see it …
Build the Team around the young players Giroux,Cloutier,Schenn,JVR and make the difficult decisions to move on from the older players…
What has Jagr,Talbot,Hartnell done since the Playoffs started..

Another year of being out-played, out-worked, out-hustled, out-smarted, and out-coached by the damn Devils. With extra time between game 3 and game 4, I felt for sure the Laviolette would make adjustments to the gameplan (not just line changes), but game 4 looked just like game 3 with the Flyers getting outplayed in all aspects of the game. I’m willing to give Lavs one more season, but they need to win the cup next year or he’s got to go.

Meanwhile Richards and Carter just moved on to the conference championship round.

Game 4 looked worse than game 3, I saw lots of players skaing half-speed the last 2 periods and in particular, Jagr,Talbot,Hartnell,Simmonds and even Briere weren’t going all out…
I saw young players Giroux,Vorachek,JVR,Read,Shenn,Cloutier playing hard to the end of the game and this is who I would build my future teams around..

Pman- no. i say keep this team and the coach together. They showed me something In the penn series. Im with you on Jagr…. i just havent seen anything out of him.

“Meanwhile Richards and Carter just moved on to the conference championship round.” – EMoney

Lets revise this statement EMoney……Quick and a few other guys have moved onto the western conference finals. Quick has been that entire team all year.

where is friggin dude at? injured forever! the D sucks and has sucked all year!

The d is where the biggest issue is right now. To beat a trap you have to be able to have d who can skate the puck to beat it. Right now the devils have two guys in the neutral zone and one guy pushing hard. The one guy turns into 2 and 3 guys as soon as Philly fumbles the puck or delays (looking like deer in headlights). They have not elevated their game. From the Pittsburgh series. The reverses they are getting burned on are what they have been able to accomplish all year long. New jersey is playing very good and would like be beating any team left ( maybe not la).

The forwards are not doing a lot but when they are having no room to move in the neutral zone and the d hits them while they are flat footed it makes entry into the devils zone almost impossible. It’s a bit of everything but the biggest reason is the lack of skating from our d, carle is our best opportunity to do this but he is not doing it.

I did not expect to win the cup this year but I did expect better results than what we are seeing from the guys now. Who knows maybe they win the next game and it sparks something. Any mobile dmen available this time of year?

Either way the future is bright and as much as I am pissed at lavi right now he is good for this team. Let’s remember from last year to this year there are 8 new forwards, 3 d, and a new goalie. Not too mention 5-7 have been rookies every night. We were hoping for playoffs at the beginning of the season.

Good points from lewdoggie and eagles0superbowls, but my issue is this; the Devils have been clogging up the neutral zone and Martin Brodeur has been breaking up the dump-ins FOR 15-20 YEARS NOW. How long is it going to take for the Flyers to either a) develop a gameplan to overcome this, or b) use similar techniques to build their own stout defense. As far as the future looking good, we’ve been saying that since 1976. I still think we have an average to below average goaltender (Phoenix finally goes deep in the playoffs now that Bryz is gone). Our defense is suspect (who knows if Pronger will ever be the same). And now I’m wondering if our coach is really anything special (the Flyers made no real adjustments to their gameplan).

I think the Flyers should stop the dump & chase strategy for it’s obviosuly not working, position 2 wingers off the boards and more in the center and have the 3rd Winger trail behind for dome drop passes as the Flyers carry into the Devils zone.. .Dump & Chase maybe for the 4th line guys to hit some bodies and take a little steam out of the Devils Defensman, but watching Jagr, Briere, Voracheck,JVR and evern Girouxz try to dump and chase and then can’t win the battles in the corner anyways, let them do what they do best and that’s skate to daylight and make plays in the open ice..

E-money valid point about when are we going to find damn who can skate through the neutral zone with speed and finesse. These guys are hard to come by but injuries has not been our friend. If we had a Erik Carlson or kris letting type guy we would be ownng them because those guys would skate it out or to the point where they would hit forwards in stride.

Paulman the reason the dump and chase is not working is because the forwards are either standing still or having to circle back because they are waiting for the puck. No speed hitting the line means no pressure on their d which means they go back and right out. Same thing for the pp, devils are pressuring the flyers all ove r the ice and not giving time and space to the flyers to setup. Very good coaching on their part. Maybe with giroux out for the next game the team will wake up and work that much harder. Flyers have been their best with their backs to the wall. Let’s see what happens

Not making excuses, it does sound like I was