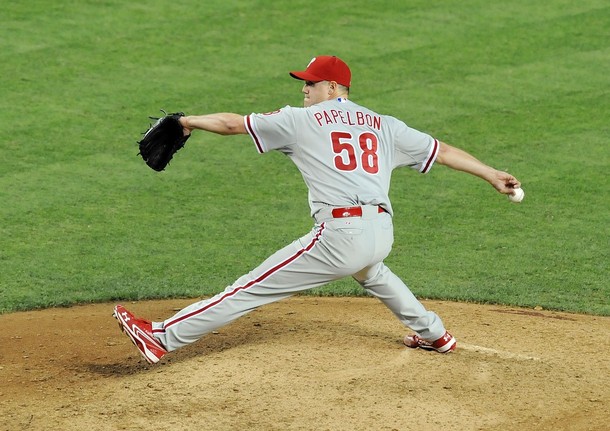 For most of the 2012, a weak offense has been the main reason that the Philadelphia Phillies have spent the entire season in the basement of the National League East. This week however, the bats have not been the issue. The normally woeful offense has had a good week by their standards, producing 12 runs in three games against the Mets, including six on Wednesday and four on Tuesday. Normally, when the Phillies manage to generate more than three runs they have an excellent chance to win because of their great starting rotation. However, the above-average performances from the lineup have all gone to waste, thanks to three straight miserable efforts from the Philadelphia bullpen.

Jonathan Papelbon, Chad Qualls, Jose Contreras, Kyle Kendrick, and Mike Schwimmer combined to allow a whopping 16 runs in a mere 6.1 innings of work. These hideous performances have let three very winnable games slip away from the Phillies, at a time when victories are very hard to come by for this ballclub.

The team has serious with middle relief, and Charlie Manuel doesn’t have an arm he can trust in the bullpen other than Papelbon. And unlike the offense, the bullpen doesn’t have any reinforcements waiting to come off of the disabled list that could make a difference.

Unless the team is able to acquire another arm later in the season, this is the group that Manuel will have to sink or swim with. The team’s best hope for a stable situation in the bullpen will be to have Antonio Bastardo rediscover his lost velocity that made him extremely effective a year ago, and that Qualls (who has shown he is capable of better) or Contreras (who looks as though he may be cooked) straighten themselves out.

If Manuel can’t trust his bullpen, he’s going to put more pressure on his starters (who are already asked to carry the team on their shoulders) to go deep into games. If the Phillies are fortunate enough to make the playoffs this year, their starters’ arms will all be exhausted by October.

When the Phillies won the World Series in 2008, and returned to the World Series in 2009, one the biggest keys to both teams was the amount of quality arms in the bullpen. Charlie had his closer in Brad Lidge, an elite set-up man in Ryan Madson to work the eighth inning, and a number of reliable veterans (Chad Durbin, Chan Ho Park, Scott Eyre, J.C. Romero) that he could call upon at any time to fill a variety of roles.

Those days are long gone, and unless someone from the bullpen is able to step up and assert himself, we may see too many games where Manuel allows his starters to throw more than 120 pitches.

It Doesn’t Matter How Ugly It Gets, Sixers Must Finish It Tonight