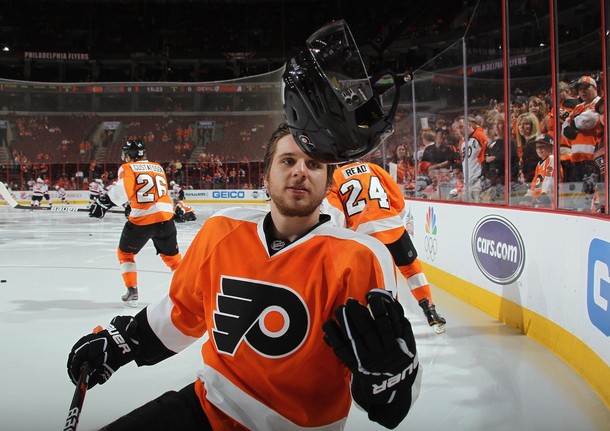 Right before Game Seven of the Stanley Cup Quarterfinals between the Ottawa Senators and the New York Rangers, Michael Grange of Sportsnet magazine described the temperament of the Senators and their fan base as “playing with house money.”

Grange wrote, “The luxury the Senators have… is that they have surpassed any reasonable expectations for their season, internally or externally.”

The Senators, having finished 13th in the Eastern Conference in 2011, were not expected to be Stanley Cup competitors just one year into a franchise rebuild, and yet they defied expectations through smart trades and a youthful line-up.

“Even heading into Game 7, [Coach Paul] MacLean has enjoyed the luxury of talking about all of this being part of a learning process, of shoring up the Senators long-term foundation,” wrote Grange. “It’s how he justifies shuffling NHL rookies Mark Stone and Jakob Silfverberg in and out of the line-up for the most critical games of the season.”

In many ways, the Philadelphia Flyers of 2012 shared a lot of similarities with the Ottawa Senators of 2012.

Nobody had any idea last July how the personnel changes that general manager Paul Holmgren made to the Flyers would pan out, but the general consensus was (and for many fans, still is) that Holmgren addressed the lack of affordable, talented depth in the organization by making smart hockey trades to extend their window of opportunity at a Stanley Cup.

By virtue of the team’s success in the regular season and their Quarterfinals victory over the Pittsburgh Penguins, there is reason to have faith that this team is going to be competitive for some time. Players like Sean Couturier and Brayden Schenn are only going to get better with age, much like Mika Zibanejad, Mark Stone and Jared Cowen will grow into their respective positions with the Ottawa Senators.

As has been the case for the last 37 years, though, the Flyers’ fortunes came to an end quicker than we were all ready to accept. The debacle that took place over the last eight days brought to light a problem that has been lingering all season long, and that is the failure of coach Peter Laviolette’s system to adapt to defense-first teams.

The shelf life for coaches in the NHL varies, but three years as a general rule is about all that one gets.  The axe drops quicker if the team tunes the coach out and they find themselves spiraling down the standings with no discernible cause or solution.

In the case of Laviolette, hired to replace John Stevens in December of 2009, the players bought into his leadership this season and his “up tempo” system was implemented well enough, in spite of all the new faces.

How many periods did they have to play from behind, earning the nickname “the comeback kids”?

If Laviolette’s tenure is to extend beyond next season, he is going to have to address this. Had the Flyers managed to beat the New Jersey Devils in the Stanley Cup Semifinals, they probably would have run into the same problems against the New York Rangers, who owned the season series with aplomb.

As the 2012 Stanley Cup playoffs continue on without the orange and black, fans will once more have to deal with the “narrative tsunami” of the peanut gallery, as Grange eloquently referred to it.  Ilya Bryzgalov is going to be labeled the 3rd worst goalie of franchise playoff history, the advancement of the Los Angeles Kings and the Phoenix Coyotes in the West means that Holmgren’s moves were wrong, and- wait for it- the choke-off artists called the Flyers once again missed winning the Stanley Cup… again. Philadelphia Typical.

While clubs like the Ottawa Senators may never come close to dealing with the amount of external pressure that is placed on the Philadelphia Flyers (Canadian market be damned), both have enough chips on the table to know that they are in a good position to make another run next year.