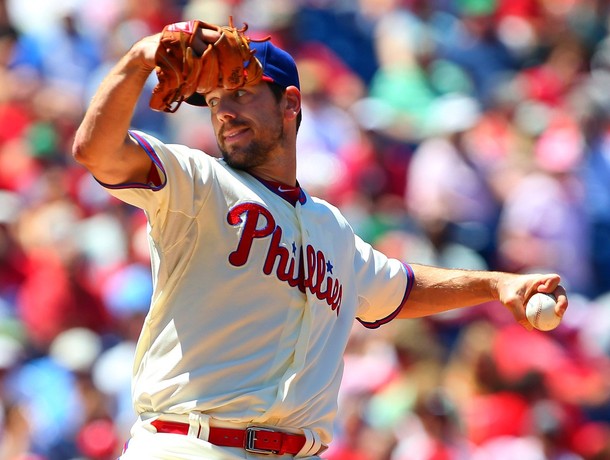 The final game of this weekend’s series with the Boston Red Sox resulted in a 5-1 loss for the Phillies, dropping them back to the .500 mark at 21-21.

Phils are now 1-2 in the “Paulman 23 GamesStretch to Decide the 2012 Season” and the same issues keep cropping up… This Elite Starting Pitching Staff gave up 9 HR’s this weekend to the Red Sox and is evident that when going against solid Offensive Line-ups, that there is very little Elite about this Starting Pitching Corp as a group this Season.. Phils will be facing the top Hitting teams over the next 20 games with the Cardinals,Marlins,Mets,Cardinals,Nationals,Orioles who all have winning records and have been playing good ball lately and the Phils cannot affford their Top Pitchers to struggle for 2-3 Innings out of the gate in every start before settling down… Missed opportunities today as there were last evening but right now, the Phils are not the Class of the NL East and anyone who thinks so is living in the past.. Let’s see what happens for the Phils need to go 14-9 or 15-8 over this 23 game stretch is they have any illusions as repeating as NL East Champions in my opinion,.. Right now they are 1-2 and lost another best of 3 Series… I will keep everyone posted but the have lost the momentum they gained last week…

Maybe to put this 2012 Phillie Season in better perspective for those who don’t follow the sport much.. The Phils at 21-21 overall, but are only 7-11 versus teams with winning Records so far in 2012… They have 14 Wins versus teams like the Cubs,Diamondbacks,Astros & Padres.. This team is weaker than I thought and now we’ll see who they do over the next 3 weeks for the next 20 games are all against Teams playing abve .500 Ball for the Season…

Just read the box score and this article——— ouch. I thought the Phils were on the rise on Friday and come Sunday they lost this series against Boston. The phils don’t have any positional player worthy of an all star vote, do they?

Catcher Carlos Ruiz and that’s about it , maybe P Cole Hamels and Closer Papelbon,.. Starters Doc and Lee are having down Seasons and are not worthy of All-Star and to be honest, I hope all the Pitchers skip the All-Star and use the 3-4 Days off for they will not have many days off for the the reaminder of the Season and the Phils may need to go to skip the 5th Starter and use their Big 4 on 4 days rest to make up some ground..
The 6 Game WInning Strek, 1 Win versus the Padres (16-26_, 2 Wins vs the Astros (18-23) and 2 Wins verus the Cubs (15-26) and the opening win versus the Red-Sox (20-21) .. so the Winning Streak is not all that impressive when you look at how poorly these teams have been playing and they combined for a whopping 27 games below .500 …

Moves, must be made soon, including Amaro’s replacement, or this season could be over by the All-Star break. See what you can get now, for Lee, Blanton, Polanco, Victorino &/or Rollins. Bring up May. Extend Hamels & Pence. Rebuild, while keeping most of the nucleus intact. Get some good, young, players in here, preferably 3b, 2b, OF & BP. Their age & declining play, are not going to miraculously change. I have zero confidence, as I’ve had prior, in them coming back this year. They are absolutely un-watchable at times. I’d rather masturbate with sandpaper & wash it off with lemon juice, than watch a full game of this garbage right now. Make changes now, then when/ if Howard & Utley come back, they don’t have to think they need to be the saviors, while still recovering & not at 100%. This team is stale, boring, has zero power, no swagger, & a horrific BP. This might be the worst BP, that we have had since the 90’s. We have Papelbon & sometimes Bastardo. That’s not good. With this stretch of 20 games coming up, we have a good chance to be out by double figures, with the quickness.