Michael Vick And Eagles Are Practicing Hard,They Know What’s On The Line 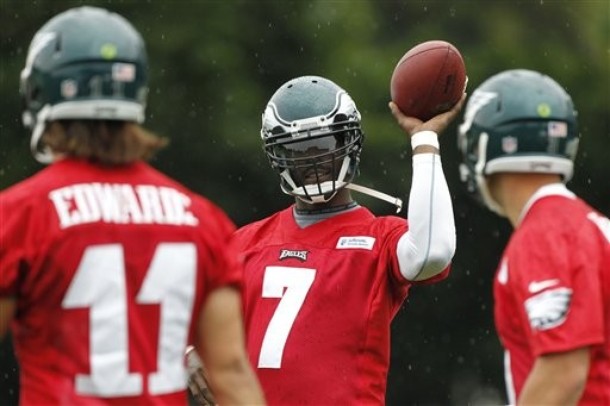 On one play Eagles quarterback Michael Vick dropped into the pocket, looked downfield but was unable to find anybody open, so he decided to tuck the ball under his arm and take off.

Third-year defensive end Brandon Graham was in hot pursuit of the quarterback, as number seven hit the afterburners and was trying to escape down the sideline.  Graham has tremendous speed for a defensive lineman and he was showing all of it during this play.  He was forcing Vick to use every bit of speed he had to escape.

The rain sent the Eagles inside earlier today, but it didn’t dampen the enthusiasm of their practice.  Vick and his receivers started out hot but cooled off as the practice went along, as the Birds defense put some of their team speed on display.

The entire squad is putting everything they can into these three workouts this week, knowing that these are the last total team workouts before they report to training camp in late July.  Both Vick and his head coach Andy Reid have let the entire team know the importance of these practices, so they’re going through these workouts with the energy and intensity of a game.

“It’s all based on what’s taking place throughout the organization”, Vick said after practice. “For us, we just feel like we should have accomplished a lot last year. Like I said, we just want to have fun and be the best that we can be. We want to work hard to get there. We know it’s not going to be easy, but we’re going to work at it.”

“You saw that last year”, Reid said when asked about the energy and enthusiasm of the Eagles defense. “I think that’s something that they’ve carried over into this year. The d-line starts it off, and the o-line, even though they can’t really compete right now, keeps it loud and exciting. It’s a good atmosphere. There’s no pads on here so they can’t really compete. With the back end guys, it’s just contagious and it carries on into the linebackers and the secondary. Those guys can compete. They can’t do bump-and-run, but they can compete. Likewise on the offensive side, the guys are challenging each other and trying to get better.”

It wasn’t great a practice from a completion standpoint, as Vick and his receivers continued striving to get on the same page.  There were a number of errant passes, and a few times the quarterback threw the ball one way and his receiver had read the coverage differently and went the other way.

They’ve put in a great amount of the offense and as usual the defense is ahead of them,  but everybody is working hard because they know what’s on the line.

“We just feel like we just need to go out and compete this year”, Vick said. “Mentally, we have to gear ourselves up to go out and be the best that we can be. We didn’t have this opportunity to be together last year, and now we have this chance to build this camaraderie every day and to have fun while we’re doing it. We’re all learning and we have all our coaches here. [Offensive line] coach Howard [Mudd] is here after being gone the past four-five months,  get him back and have him around. We’re all pumped up again.”

I take my hat off to the Birds and the effort they’re putting in during practice, but they’ve got to get better.  It’s still very early so they have time to get the job done.  We’ll keep you posted.

Michael Vick dropped into the pocket, looked downfield but was unable to find anybody open, so he decided to tuck the ball under his arm and take off.
(never seen that before)

Vick and his receivers started out hot but cooled off as the practice went along
(like Vick in the 2nd half of games his entire career?)

it wasn’t great a practice from a completion standpoint, as Vick and his receivers continued striving to get on the same page.
(fantastic)

There were a number of errant passes
(that’s a bit of a suprise isn’t it? He’s always been so accurate)

a few times the quarterback threw the ball one way and his receiver had read the coverage differently and went the other way.
(this is only VIck’s 4th year on the Birds, so lets give him just a little more time…..because he’s “competing”)

Can someone tell me why our 50 million dollar receiver is not at OTA’s? Oh that’s right, he’s missing them due to “family matters” — but yet, he’s posting pics on his twitter about him and his crew in a video shoot. Nice. Money well spent.

Vinnie you my friend get the comment of the week!

This guy is upset because he ranked on #70 on NFL Network’s Top 100 players of 2011. First off you dont play an entire season so I dont know if you even should have made the top 100. Not fair to the guys who actually played a entire season and gets ranked below you.

To Birdo – D-Jax always misses early OTA for taking care of family buiness out west.. It may be around the anniversary of his Father’s Passing.. Similar to Assante Samuel who always was excused from the 1st few days of Summer Camp to take care of family business (

No excuse, get to work, says a lot of djax, like others have posted earlier

@EaglesSuck, Vick didn’t sound like he was complaining to me, fact is he was asked a question about the list and he answered it, but he dam sure wasn’t complaining, fact is he said it motivated him to be even better. Maybe next time some of you should listen to the entire interview as opposed to reading what these reporters say, or just listening to the parts you feel you can make into a big deal.

he was in fact complaining. I guess it’s a positive that he will use it as motivation, if thats not just lip service? I wonder about the play calling this year? If they really simplified the offense, had Vick really get the offense down..that could work wonders for him.