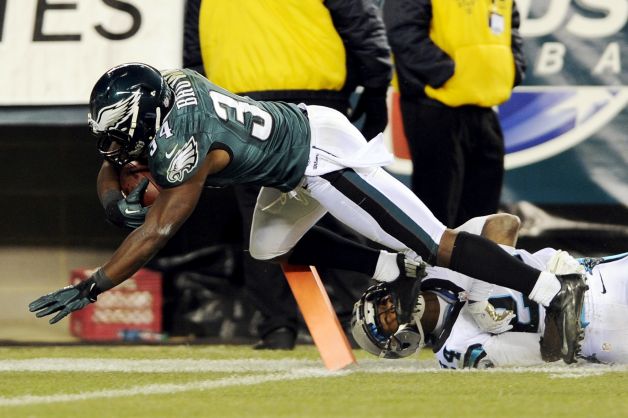 Highs And Lows For Bryce Brown

It was the best and the worst of times for rookie running back Bryce Brown.

Brown made his first career start tonight. He enjoyed a career night, running for 178 yards and two touchdowns. On a night where top receiver DeSean Jackson left the game with a first quarter injury, Brown became the engine for this depleted offense. Every time the Eagles put the football in his hands, something exciting seemed to happen.

Unfortunately, there was an ugly side to Brown’s story tonight.

Brown was the reason the Eagles were in this game, but he was also one of the reasons that they lost. The seventh round pick committed two costly turnovers, fumbling the football away twice. Brown’s first fumble didn’t lead to any Carolina points, but it did stop an Eagles drive in which the team was moving the football into Panther territory.

Brown’s second fumble came right after the defense managed to force the Panthers into a three and out. The Panthers took advantage of the short field and turned the turnover into a Graham Gano field goal to take the lead.

However, Brown’s sins in this game are very forgivable and may in fact be a blessing in disguise. His negative contributions kept the Eagles from picking up a meaningless win. Carolina now owns the tiebreaker with the Eagles, and the loss will help the Eagles secure a higher draft pick in next April’s draft.

Forget about Brown’s fumbles. We found out tonight that the running back is a very capable backup for LeSean McCoy. Brown ran hard all night, and took advantage of his opportunity to shine under the Monday Night lights. The Panthers knew all night that he was the Eagles’ only offensive threat, and even though he ran behind a poor offensive line, the Panthers still had no answer for him (short of knocking the ball loose). He’s obviously got to get better with his ball security in the future, but that is a correctable flaw.

The Eagles defense was once again powerless to stop their opposition. Carolina opened up the game with a pair of touchdowns on their first two drives. The defense put together a sorry effort on the opening drive. The Eagles offered absolutely no resistance, allowing Cam Newton to complete all three of his passes for 47 yards and a touchdown. The drive ended with DeMeco Ryans turning tight end Gary Barnidge loose for a 24-yard touchdown.

On the second Panther possession, Newton hit Brandon LaFell for a 43-yard touchdown. Cornerback Brandon Boykin ran a blitz, but none of his teammates picked up the Carolina receiver, allowing him to score one of the easiest touchdowns on his career.

The defense began the second half by allowing Newton to march the Panthers down the field on an 11-play, 95-yard drive that ended with a touchdown run by the quarterback.

In the fourth quarter, the defense allowed the Panthers to take an eight-point lead by giving up a six-play, 60-yard drive that also ended with a Newton touchdown run.

The defense did have a couple of nice moments, and made a couple of stops over the course of the game that helped keep the team in the game. But ultimately, we saw more of the same from this group; soft, uninspired play complete with terrible breakdowns. Every member of this defense should be ashamed of themselves.

Nick Foles played better in his second start, but this game wasn’t much of an improvement over his effort against the Redskins.

Foles completed 16 of his 21 passes for just 116 yards. Most of his completions came on short passes, with his longest one going for just 16 yards. The rookie also gave the Panthers several opportunities for interceptions during the team’s first time. In the redzone, Foles tried to force a couple of passes to Jeremy Maclin, both of which were nearly intercepted by Carolina’s Sherod Martin.

The Eagles made Bryce Brown the focal point of their offense, and didn’t ask too much of their rookie quarterback. Part of the playcalling may have been influenced by the fact that the Eagles played most of the game with just Jeremy Maclin, Riley Cooper, and Damaris Johnson as their only healthy receivers.

We don’t have any better idea about Foles this week than we did a week ago. We need to see him continue to play. Last week Andy Reid and Marty Mornhinweg asked too much of Foles, asking him to drop back and pass more than 40 times. This week they didn’t ask him to do enough. We’ll see if the third-round pick even takes the field next week, as Andy Reid has insisted that Michael Vick will be his quarterback if the former Falcon is healthy.

Well, the Philadelphia Eagles now sit at 3-8, with the worst record in the NFC. So much for the substantial improvement that Jeffrey Lurie was looking for this year. Only five more weeks of the Andy Reid era.

Even though this was another loss, I did think that the team played a little harder tonight than they had in over a month, although that isn’t saying much.

At least this week, we got to see some positives. We saw a couple of guys play for jobs next season. We found out that Bryce Brown can be a legitimate backup for LeSean McCoy. We saw a nice game from second-round pick Vinny Curry. For the first time since the Detroit game, we saw a reasonably competitive football game that the Eagles had a chance to win.

The Eagles have a date with the Dallas Cowboys next Sunday night, and hopefully we’ll have another opportunity to evaluate Nick Foles and some of the other young players on this doomed football team.

Amazingly, Todd Bowles Has Made The Defense Much Worse