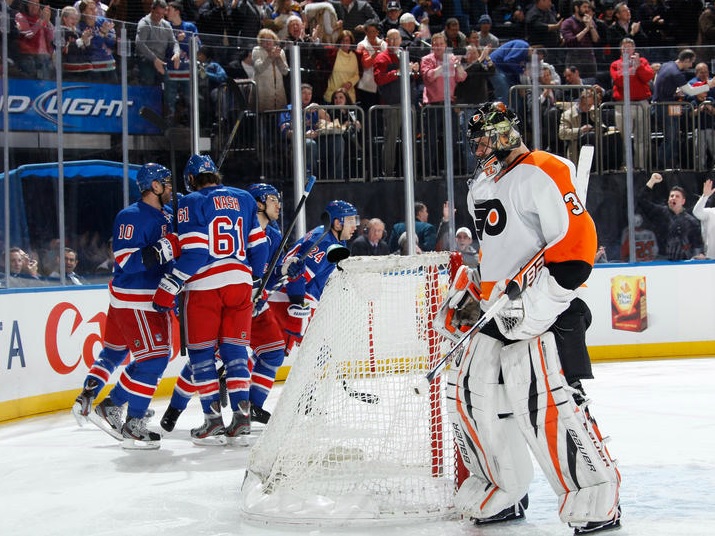 The Philadelphia Flyers have officially reached the halfway mark of the 2013 NHL season.

The team was looking for its third win in a row tonight against the New York Rangers, which would have been the first time all season that they had accomplished this feat.

Instead, an overall sloppy and disorganized effort was on display and the Rangers were able to exploit it, ending the game with a decisive 4-2 victory.

As has been the case more often than not, the Flyers found themselves pinned in their own end after the first shift. A lazy penalty from Kimmo Timonen at the 1:09 mark gave the Rangers an early powerplay opportunity. Rangers captain Ryan Callahan skated in on goaltender Ilya Bryzgalov from the side of the net unchecked, scoring an easy opening marker.

Bryzgalov looked absolutely pedestrian throughout the game. He didn’t receive much support on some of the goals against, but he failed to put himself in a position to challenge the shooter on multiple occasions. In all, he stopped 16 of 20 shots.

It has been easy to defend Bryzgalov to date, as he has (or at least, had) been the most consistent player on the team. I can’t help but wonder if the fact that he has had more starts than any other goaltender in the NHL at this point has dulled his game. The Flyers can’t keep running him into the ground, no matter the schedule.

After Callahan’s goal, the Rangers became temporarily unglued. Three penalties were called in the remainder of the first period, and the Flyers’ top powerplay unit was able to capitalize on two of the three attempts. Wayne Simmonds cleaned up the garbage in front on the first attempt while Voracek scored on his own rebound for the second.

Both players now lead the Flyers with 10 goals apiece. Voracek, who scored 18 goals in 78 games played last season, is on pace for a 34-goal campaign in an 82-game schedule.

Callahan tied the game, killing the Flyers’ short lead, with 41 seconds left in the first period. The Flyers made a poor line change, leaving Luke Schenn as the sole defender of a 2-on-1. The decision by Schenn to slide to the ice to block a pass essentially took him out of the play instead, allowing Callahan all the room in Madison Square Garden to operate.

Defenseman Nicklas Grossmann was on the ice up until the 19:50 mark, but did not return for the remainder of the game. Sarah Baicker of CSNPhilly reported that Grossmann was dealing with a hip flexor injury. Assuming Andrej Meszaros is not forced into the line-up ahead of schedule, Kurtis Foster will likely return to the line-up on Thursday.

The score remained even through the second period, where both teams struggled to generate offense. Through two periods, both teams were even in scoring chances while the Blueshirts held a 14-12 shot advantage.

The third period might as well be called “The Rick Nash Show,” as the left winger scored both the game winner and the insurance marker to seal the Flyers’ fate.

A cannon of a wrist shot beat Bryzgalov early in the period, as Nash was able to beat the defense into the zone. Nash then took advantage of another bad line change, where he was able to walk around Timonen with ease to the net. Timonen tried to use another lazy hooking penalty to hold him back, but Nash scored anyway.

The effort was there, and (for once) the special teams were both stellar (2-for-3 on the powerplay and 3-for-4 on the penalty kill). It was just a disorganized, poorly executed game by the Flyers. I don’t know if you blame the coaching staff, the players, or both, but regardless, it stunk.

The Rangers clogged the neutral zone well and limited the Flyers to a dump-and-chase game that kept them from generating many scoring chances.

The talent is there on offense, but the team needs to find a better way of gaining possession into the offensive zone against tough defensive teams like the Rangers. The defense continues to look like a patchwork quilt rather than a fortified unit, especially with the injury to Grossmann.

As mentioned, the Flyers are back in action on Thursday. Beating the Penguins is never easy, but the Flyers are in sink-or-swim mode if they have any hopes of making the playoffs.

Notes From The Sixers’ Loss To Boston

tough defeat — with Pittsburgh and Boston on deck
the Flyers have been getting away with turnovers lately but not yesterday — Callahan and Nash took full advantage of Bryz this time
Andrej Meszaros is getting a lot of money, disappointing addition
Sean Couturier has no offense – he is a Catch 22 – he needs the AHL to develop his game but is too valuable as a defensive forward to remove from the roster

Bryzgalov needs a break, laviolette manages goaltenders poorly, if Bryzgalov goes into one of his funks the flyers are finished