What Will Become Of The Eagles’ Old Defensive Ends? 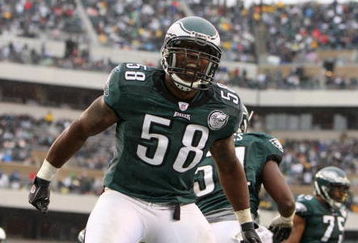 With the Eagles making the transition to a 3-4 defense, they’ve got a number of players leftover from their 4-3 scheme that could have some trade value elsewhere. Right now the Eagles have too many 4-3 defensive ends. Trent Cole, Brandon Graham, Vinny Curry, and Phillip Hunt are all still on the roster, but it would be very surprising to see all four of them on the Eagles Opening Day roster.

Right now, either Trent Cole or Brandon Graham would start alongside DeMeco Ryans, Connor Barwin, and Mychal Kendricks in the Eagles’ new scheme. The team hasn’t declared whether or not they view Curry, a second round pick from last year, as an outside linebacker or a defensive end in the new defense, although a number of 3-4 teams worked him out before last year’s draft. Hunt wasn’t given much of a chance to perform in the defensive end rotation last season, but he’s shown flashes.

The Eagles aren’t satisfied with their linebacker situation. They’re going to bring former Dallas Cowboy Victor Butler in for a visit, and they’ll add more depth and competition to the position through the draft. So where does that leave Cole, Graham, Curry, and Hunt? Which of these four has a real future with this team, and who will end up being the odd men out?

Of those four, Graham and Curry are the only ones that have any kind of trade value. After nearly three years of doing nothing, Graham finally began to slightly resemble a starting defensive end. He came on strong at the end of the season with four sacks in the final five games. Curry barely saw the field in his rookie year, but he was high on many teams’ draft boards a year ago. Even if the Eagles decided to trade Graham or Curry, I couldn’t see them getting much more than a fourth round in return for either player.

Trent Cole is coming off of a terrible year in which he managed just three sacks, the lowest total of his career. He was a complete non-factor for the most of the season, and his best days are likely behind him. The Eagles have said throughout the offseason that they believe Cole can succeed in a 3-4, but I’m not so sure at this stage in his career that he can make that transition.

Hunt has shown some potential, but the Eagles have never given him much playing time.

The defensive line/linebacker picture is only going to become more crowded after the draft, and it will be interesting to see which of the remaining defensive ends stays and goes.

What Should The Phillies Expect From John Lannan?

The team probably views them all as expendable, so if a trade offer for any of them surfaces they’ll be gone, but Chip Kelly seems to really want to predicate his summer camp on open competition…whoever is left will be in a Gladiator situation with the others.

Trade Graham as well…..makes no sense to even waste wishful thinking that he can build on the aberration of his fortuitous OK season.

The guy is an average player at best. Like G says in the article he SLIGHTLY resembled a 4-3 DE. SLIGHTLY. Translated, GCobb wasn’t all that impressed either!! He had a decent season for himself, but that’s it.

He isn’t crap compared to some of the more impactful DE, or OLB’s in the league.

Hurry up, swallow your pride Howie, because he was just one of many bad picks through the years and trade him, …and Cole – he is done.

Well we need to ask G his opinion considering Denny wrote this article. I have read articles that claimed Curry was strictly a 4-3 end that he didn’t perform well in 3-4 positional drills. Nobody knows anything until the pads go on. I think Cole and Hunt are goners.

HAHA!! ok Biggie, Denny wasn’t impressed with him either.

If the eagles intent is to play a 3-4 then their current personal makes that impossible. They won’ be able to stop the run, their front 7 is still way too weak. Trent Cole, Brandon Graham and the rest of their former DE have a better chance of succeeding at OLB than their personal slatted for 5 technique DE and MLB.

Not only that eagles but Kendricks IMO is too small to play inside backer in a 3-4.

Thats right Biggie. That is why I would try him out as a SS.

Kendricks is a LB and not a Safety..

But has the athleticism to play Safety. If they felt comfortable to try Keenan Clayton at SS, they should have no problem trying Kendrick out, or experimenting with him as a Safety.

Paul, you and I were the most vocal that Clayton should have been a Safety, Remember?

I know you don’t think Kendrick’s isn’t as athletic as Keenan Clayton, because he, although shorter, is bigger, harder hitting, quicker to the angle of the ball carrier, and faster than Clayton. I think he would make a heck of a strong safety.

#1) Clayton played Safety in HIgh School and was all-Texas State and was recruited as Safety by Oklahoma and was converted to LB his Sophomore year at 215lbs to play LB since the Sooners had injuries a bigger need at LB than Safety
#2) Kendricks has always played Safety.. Was PAc-12 Defensive Player of the Year as a Linebacker
#3) Clayton’s natural weight is about 218-220lbs, miore speed than Kendricks, long arms and I always believed had a shot to be a Safety in the NFL
#4) Kendricks natural weight is about 235lbs, shorter arms and does not posses the top end speed to cover at the Safety Position
Kendricks is stronger and has a nice career ahead of him as a Linebacker which he’s played since he was a kid.
#5) My suggestion for Clayon to move to Safey was logicial
since he played the position for 5-6 Years and was too small and light and naot naturally strong enough to ever be an NFL Caliber LB, so converting him to Safety was not a leap, not a real risk since he wasn’t going to make it in the NFL as a LB..
Kendricks is a difference story, he has been groomed as a LB his enire Career and switching him to Safety is a dumb move for he is a LB, does not have hips and speed to cover..
C’Mon GmCliff, you are way wrong on this one my Friend

Corrections on #2 Kendricks has always played LB and not Safety

He could cover them DCar, he could hold on to them because he isn’t big enough to play that side.

He would be better served as a Strong Safety.

BTW, I eat my lunch at my desk, so I can Digest, and dictate at the same time bruh…Hhahahahah!!!

Lol what a stupid comment good thing your not the one coaching the eagles.

The other issue is that I suspect the DC is going to try to morph between 4-3 and 3-4 formations based on how his scheme has been described, so don’t be too surprised to see Cole and Graham with their hands in the dirt if they make it summer camp.

Kendricks is fine to play ILB, the Eagles just need to find another HUGE athletic defensive end that can help stop the run.