A Look At The Phillies 25-Man Roster 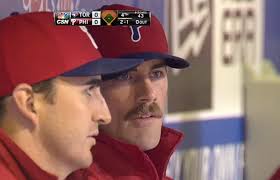 Cole Hamels: The ace of the staff. He’s been sharp through out Spring Training, and should be primed for another big season. Also, he’s grown one heck of a mustache.

Cliff Lee: The team hopes the lefty will bounce back from a disappointing 2012 campaign and become a dominant anchor in the rotation once again.

Roy Halladay: After an alarming spring, does the former ace have any magic left?

Kyle Kendrick: He’s going to have his share of ups and downs. Not an ideal fourth starter, but the team could do much worse.

John Lannan: He’s got decent career numbers, but he’s rarely going to take a game deeper than the sixth inning.

Jonathan Papelbon: He should continue to consistently shut the door when the team hands him the ball in the ninth inning.

Mike Adams: Adams should be the answer to last season’s eighth inning woes.

Chad Durbin: Reliable veteran should be a valuable piece to this bullpen.

Antonio Bastardo: Phillies won’t ask him to do more than get lefties out in order to restore his confidence.

Jeremy Horst: Lefty put up good numbers a year ago, will have a chance for a larger role.

Phillipe Aumont: Centerpiece of the 2009 Cliff Lee trade will finally have his chance to impact the big league roster.

Raul Valdes: Veteran was effective when called upon in 2012, and can pitch multiple innings.

Jimmy Rollins: Still one of the best all-around shortstops in baseball, despite his frustrating approach at the plate.

Chase Utley: Will be available on Opening Day for the first time in three years, but his poor Spring Training is cause for concern.

Ryan Howard: The team desperately needs him to return to being a great run producer.

Michael Young: I’m not impressed with Young. I don’t expect him to hit more than .260, and his defensive skills are a concern as well.

Erik Kratz: Phillies hope they can get by with Kratz until Carlos Ruiz returns from suspension.

Domonic Brown: His big spring has given the team and fans a reason to hope that he can still fulfill his potential.

John Mayberry Jr.: It’s hard to hold on to hope that Mayberry can be anything more than a fifth outfielder at this point.

Laynce Nix: If he stays healthy, he can be a nice piece off of the bench.

Ender Inciarte: Ruben Amaro loves his Rule 5 guys…hopefully Inciarte can offer the team a little more than what fellow Rule 5 picks David Herndon and Michael Martinez did in recent years.

Also should have signed RHP K Loshe once Doc was looking bad
Breweries signed for a 3 Year $13 Million Deal like 10 days ago for a RHP who will win 15 Games a year.. Phillies should have pursued him
Phil’s Starters after Hamels/Lee is not very good, Doc, Kendrick’s,Lannan will
Have Era’s of Be 4.25 4.5 at Best
3rd Place finish in NL East with about 85 Wins is my prediction

Signing a 34 year old mid level pitcher for 3 years is foolish. If doc is no good they will find someone from within to give a Worley like effort. Glad to see you are back on your stupid negative world… I would expect nothing less…
You have also stated that the Phil’s need to get younger…a 3 year deal for 34 year old would not be good. Phil’s are going to give it a shot this year and if it’s no good will go young

I am much more positive about the Phils chances in 2013 than I was last year which I thought was Amaro and Zco just hoping and hanging onto the past, but at the same time I am also realistic
The Nats have the best line-up, the best Starting rotation and the best Bullpen and a very good Manager so it’s hard not to like their chances
The Braves gave probably the best ZoF with the Supton’s and Heyward
In the NL, plus solid players in Freeman, McCann and Uggla and 2 young, up and coming Pkayers in SS Simmons and 3B Johnson
The weak spot on Braves is probably their Starting Pitching which is hard to believe but they will go with Hudson, Beachy, Medlin and youngster named Tehran and also have a good Manager in Gonzales
Who knows how to utilize a 25 Man Roster
I will continue to call them as I see them
And the Phiks are a 3rd Pkace Team in the NL East and could maybe sneak into 2nd place if everything were to go well
But Phiks Starting Rotation is average after
Hamels/Lee, Bullpen is improved but still lags behind Nats & Braves
Team Defense is suspect and age, injuries
To key players are likely given their history and age

3 years 33 million. not 13. I kinda like they didnt sign him it almost forces them to call up Morgan soon.

I am concerned about the overall Defense and especially the Infield and the corner Outfield Positions
Utley,rollins& M Young do not have the Range they had when younger
And Brown & Delmon Young Nd Nix are all below OF’s Defensively
A fast start and a resurgence by Utley, M Young and Doc are about the only chance I see for Phils to contend with the Top Teams in a stronger NL
This Year (Nats, Braves, Reds, Cardinals, Giants, Dodgers, and even Team like the Breweres, Diamondvacjs & Pirates are stronger Teams this Season)
A good Start is important for the Phils and Hanels/Kee will have to not only remain healthy, but must pitch lights out for the Season

young will be hurt before we know it. hopefully the Phil’s turn to asche over galvis when he hits the dl

Rollins is still a good SS but he won’t see anymore in his career, he will make the plays he’s supposed to make but Utley,Young and Howard all have limited range
Revere in Center is great as is Catcher Ruiz when he returns
But D Brown, Delmon Young and L Nix are all liabilities in the OF
I am sure Mayberry will see some action as a late inning Defensive replacent
For Brown or Young, but it is what it is
The Bats/Braves are much stronger Defensively all around than the Phils and it’s just a fact, no sense in sugar-coating anything because they are my hometown Team.. I am just being realistic who h is why I am usually right on my predictions about the hometown Team’s finish’s or Playoff chances

Kyle Loshe has won 30 games the last 2 Seasons which is more than Cliff Lee and close to Doc’s/Hamels production
How old was Doc & Lee when they acquired them??

But as you often state and as you stated above about Rollins and young there is decline… Or in your world only people decline when you say so… Halliday, Rollins, young are on the decline but Losh is good for 3 more years at 11 million per….and a year from now when he’s down you would whine about his declining skills…. Have it both ways as usual

With the current state of the Starting Staff, and Doc’s iffy status at best moving forward, Yesm, as GM, I would have went out to sign another quality arm since this may be many Phils last go around and if you want to make the Post-Season and then actually perform well in the Post-Season, you need at least 3 Good,. Right Now the Phils have 2 Soild Starters, 1 up and down Pitcher in Kendricks and 2 Question Marks in
Doc & Lannan and that’s the realitiy of the situation, so know Doc is iffy at best, and Lohse was still out there, i would have pursued him..
Trade Utley and his $15 million, Keep Bettancourt and platoon Galvis at SS,2B and your $$$ issue is gone..

This would have turned out similar to your asmo flip flop. In 2015 when he is 37 and broken down you would be ultra critical and said Fraudman says that they made a panic move. Platoon at SS are you smoking the stuff grown in the woods down there?
Who is going to trade for utley and his salary at this point… Once again revisionist history from the fraud and oversimplification of the real world.

Are you trying to make the Playoffs in 2013 ?? Whose worrying about 2015… GM Amaro, Manager Manuel, Utley, Rollins,Doc, Lee,Adams,Durbin, are all long gone by then…
If your going all in for 2013, then they better do something about their Starting Rotation to be able to compete with the better Teams for t’s not going to happen with this Current Starting Pitching Staff they have and you are fooling yourself if you think it’s good enough

Of course the playoffs are the goal. Adding Losh would have been panic, I’ll advised…. Funny you talk about winning – you said last year to blow it up, you said a 32 year old SS wasn’t woth 11$ million… Now you are saying a 34 year old journeyman pitcher is worth 3 years

Adding Loshe would probably give the Phils a real good shot at a Wildcard, then shut down Doc to June/July and try to get 18-20 good Starts from him for the stretch run, if the shoal is to make the Playoffs in 2013..

32
You say you are being realistic when you are negative about the Phil’s and age but bash them when they pass on an overpriced 34 year old. When Losh went bad you would have called it a panic signing.

Like most sports these days it’s about getting to the post season then anything can happen, so I don’t care much about other teams other than the nats and braves.

The braves are as dysfunctional as the phillies were, but upside down in favor of hitting,, and the upton bros overrated, strikeouts along with heyward, I like the phillies over the braves

Don’t know how this season will play out with the nats or phillies, but I agree paulman the phillies will have to get hot early in order to compete later on when injuries, fatigue sets in

On balance this is a far better team than last years

Is the outfield a platoon or did Nix get the node over Mayberry or vice verse ?

Counting on this team is a bad bet Infied oldest in baseball, halladay verge of breaking down , ooutfied lacks power and defense and not sold on brown in real time. I think 3rd place at best and 82-85 games

I agree 100% with you Don P,
I M not being negative, just realistic as you are with the age, injuries and lack of Infield Defense and both Corner OF Positions
Wait to Delmon Young plays LF , he will make D Brown look like a Gold Glover