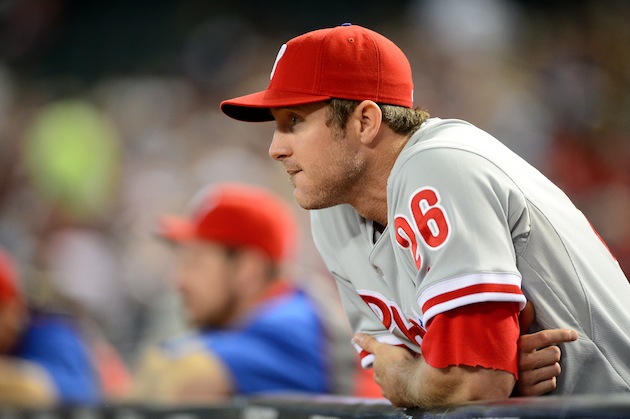 The Philadelphia Phillies were unable to start the season with a victory on Monday night, falling to the Braves 7-5 in Atlanta on Opening Night.

This wasn’t the start to the season that the Phillies wanted, but the team showed some encouraging signs in the loss.

We saw tonight how having Chase Utley and Ryan Howard back in the lineup from Day 1 is going to make a difference. On any given night, either of them has the potential to go off and carry the offense. Utley did that tonight, and Howard is going to have his share of games where he makes a difference.

The Phillies offense was able to chase Tim Hudson from the game before the fifth inning was over, and they chipped away at the Atlanta lead throughout the game. Its nice to see the offense put together a game where they’re consistently threatening to score. If they can do this consistently, they’ll be hard to beat.

This loss falls on the shoulders of Cole Hamels. Hamels didn’t pitch like an ace tonight, and allowed the Braves to hit him early and often. With question marks throughout the rotation, every start from Hamels (as well as Cliff Lee) takes on increased importance. This team needs their aces to come out and perform as advertised. Hamels didn’t do that tonight, and the Phils are 0-1 because of it.

Where is the moron, who said the Braves were not going to be good, because they have too many K’s in their lineup! I’d rather have all their power, & their K’s, than our anemic lineup! It reminds me of a certain WS Championship OF that played in 2008! HMMMMM!

Five runs with your ace on the hill should be more than enough to have won the game.

Hamels location was piss poor with the fastball. He pitched to the strength of the braves, fastballs, but his fastball is not dominant enough, nor does it move enough.

Enough of this praise for the braves dcar, a better pitching performance would have made the difference

Dcar, you calling me a moron, I’ll meet you dcar style, I’ll be wearing my red phillies hoody, lol

jake, guilty conscience? LMFBO! No it wasn’t you. I forget who it was. But, he told me I was an idiot, for thinking the Braves OF was better. He said they sucked & were nothing but strike outs, & he’d take our OF, over theirs, because of the K’s. Talk about a delusional stepford. HAC, isn’t even that deluded! I also told him, look at our WS winning OF, in 2008! Burrell, Werth, & Victorino, were strike out machines, along with Howard, & we won. What a moron! BTW, I have the new grey, red & blue, Spring training hoodie, I got in Clearwater.LOL!!!!

I’m sure the 08 Phil’s had plenty of days like that. Gentlemen it’s baseball it is a marathon.. I guess we are all bored and have nothing to do

my only point is such that Dcar pumped up this Braves outfield and the 3 of them were non factors last night with the exception of the 1 hit albeit a HR.

If I were assembling a team I wouldnt want all those ks in my outfield and have said that the past few months. I havent seen anyone say the Braves are gonna suck because of it though, nor anyone say our outfield is better than theirs.

This braves team is built exactly like the 08 Phil’s. Medicocre starting pitchong, lights out BP and crush the ball. That is a blue print to follow.. The trouble comes when all your guys turn 30 and want to be paid.
Phil’s need young players Joseph, brown, Ashe and galvis to be players it’s that simple for the future… So far no trade during the 07-12 seasons have bit them too hard… I guess singleton might end up being a player but so far they haven’t given up a stud but these guys they have left have to become studs.

You just misunderstand me, decipher & comprehend what you want, sometimes! Just because I’m critical, doesn’t mean I want them to lose. I love the Philly 4, I just keep it real, & brutally honest.

The only player I think the Phils wish they still had was Travis d’Arnaud. He looks like he is going to be a total animal.

I agree the Phils need Asche and I think they shouldve passed on M. Young and let him take over. I think Galvis gives you nothing offensively so I am not look forward to his career as a Phillies starter. Joseph and Asche next year is highly probable

Phils lost because their 2 highest paid players on the field last night and long term stunk– Howard (0-5) and Hamels ( 3HR 5 runs)
Michael Young cannot play 3rd base, he shanked a back hand ball which the hitter was credited for a double and botched a double play ball. Brown also had a bad day in the outfield looking like a ballerina pirouetting

e0, Brown is a bum & a fraud. It should come as no surprise. I love how everyone was crowning him the next Willie Mays, off of Spring training #’s. Every year, there are Spring training Warriors. It means ZILTCH! He sucks! Bank on it.

spot on eagles0. I do not like what I see at all from Young and Brown is awkward at best in the OF

My enthusiasm and delusional Pom Pom waving as you call it comes from growing up watchg fans (including my dad) calling MJS a bum every time he struck out or popped up and then cheer him and kiss his ass after the WS and saw how much more he was appreciated when he was gone. I think jimmy will be in that category as well as Howard…
I just always thought it was hypocrital of the fan base act like a.holes to him the way many are today… Anyway

This may be the worst Defensive Phillie Team from Top to Bottom since the learly 90’s.. This reality will come into play and will probably cost them some games this Season..
Mike Young is a nice fella and PLayers, but belongs in the AL where he can DH, Play 1B, but he will struggle in the Field at 3B.. and the corner OF Positions will be a struggle all season between Brown,Nic and jsut wait to you see Delmon Young out there.. (Delmon Young is another player best suited for an AL Team since he’s bat is potent but his Fielding, Poor baserunning will hurt over a course of a game and season)
Just like last Year when Phils signed 1B Jim Thome, all good guys and players but just not built for the National League in my opinion (at least during there later years of playing)
Someone needs to tell Reuben Amaro that the Phils play in the National League

Thome was not brought in to play first. The rest of the analysis is fairly correct. Thome was brought on to pinch hit… There was thoughts that maybe he could possibly a game or two at first but it wasn’t his primarily

Thome was signed as insurance in case Ryan Howard had a set back and was out for 2012..
You don’t sign Thome for $1.5 MIllion to only get 3-4 PH At-Bats a Week..
If Thome played 3 Games a Week at 1B, and then PH some of the other Game where he could get 15 At-Bats a Week, he probably could still be productive, but Thome couldn’t play the field any longer so he was relaegated as a PH and basically useless in the NL.
Just like all Big League Hitters that are or were everryday Players.. Going ftom 202-5 AT-Bats a Week to 3-4 is a huge adjustment and not easy to do at the MLB Level.. Signing Thome was a sentimental signing with the hopes he could contribute nad finish his Career as a Phillie.. But you have to know how and where a Player will be able to play before you sign him which I question Amaro about signing Delmon Young.. If he’s focused,heatlhy an in shpae, you can get by with him as a LF and replace him in the late Innings with a Defensive replacement, but Delmon Young belongs in the AL as a Dh and I guess when the Phils play Inter-Leagues Games, he will be the DH..

It’s sad, but very evident, Doc Halladay can’t get Najor Leauge Hitters out any longer, he’s lost it and will not by able to compete very much longer throwing 85-87 NPH with little movement of no pin-point control of his breaking balls
It’s over for him and if the Phiks are going to trot him out every 5th Day
It’s over for them as well. it is what it is..

Doc 85-87 MPH groove’s straight fastball to a player (Gaddis) playing in his first MLB Game and gets his first hit and HR off of Doc ..
A memory for Gaddis for sure but a sad sight and result for Doc

Reliever Valdez is another flat bal- straight ball Thrower with mid-upper 80’s stuff.. The Phils are in Serious trouble for 2013

Phil’s getting shutout by Journeyman Pitcher Maholm..
Whoop, this 2013 Team is weaker than I thought..
It’s going to be a long summer and it appears the Phils struggle verses
LHP’s with this lefty dominated line-up..
The Eagles Summer Camp can’t come quick enough I am afraid..

A little life by the Phiks, lousy call on 3rd Strike on Howard and questionable call at 1st Base on Young’s dribbler
..

Great Inning by Adams, no wasted Pitches, goes right at Batters and Pitches appear close to the Strike-Zone and just bottom out.. Looks good

At the end this game the Phils will
Find themselves 2 Back behind the Nats/Braves & Mets
And on the basement with the AAA Talent heavy loaded Roster of the Florida
Marlins with the only Diffence being that the Phillies Roster earns about
$130 Million more for the 2013 Season than the Marlins do
Good Grief!!!!

I never did like Papelbon, the guys a drama queen,
He wastes too many pitches and then always gets himself in trouble
By getting behind batters, his balls are nowhere close to the strike zone
Trade his ass to the Detroit Tigers who need a Closer and get RHP Rick Porcello and a Prospect in return..
Porcello is only 25-26 Years old..