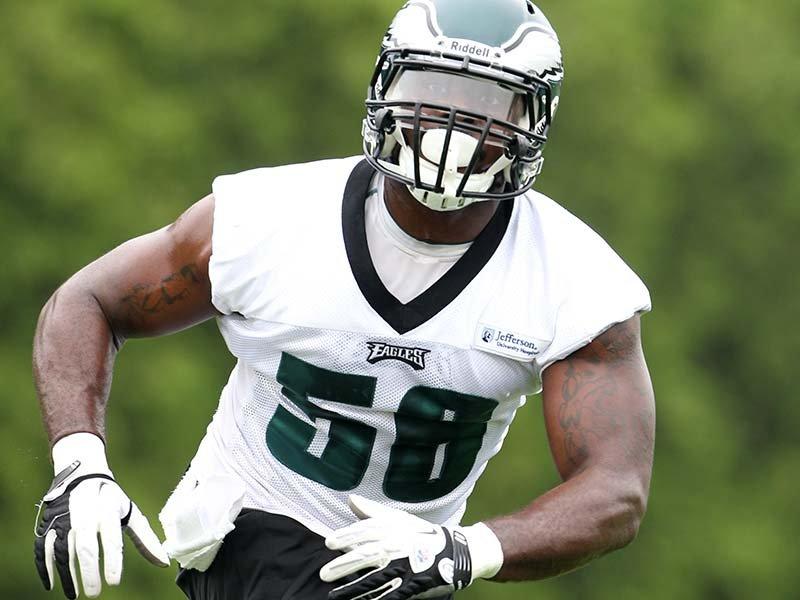 Although there have been a great number of conversations about Trent Cole’s and Brandon Graham’s ability or inability to drop at the snap of the ball and cover the pass in Billy Davis’ defense, the guy who will be the starter is going to be the guy who can get to the quarterback.  Davis isn’t going to overdo having Cole or Graham drop into coverage, they’re on the team because they can put pressure on the quarterback, so for the most part that is what they’re going to be asked to do.

It’s been taken for granted by some that Cole will be the starter at the right outside linebacker position, but that’s not written in stone.  I thought Graham was a much more effective  pass rusher a year ago than the veteran Cole.  Trent played nearly the entire season, but was able to come down with only three sacks.  Those are horrible statistics.

Graham played on and off, and started near the end of the season, but he was able to come down with 5.5 sacks in that time.  He might have played about %50 of the snaps that Cole played, yet he almost doubled him in sack production.  That is a huge difference in performance.

We heard every type of excuse in the book regarding why Cole wasn’t getting to the quarterback.  That worked a year ago, but it won’t work this time around.   The Eagles must get pass rush pressure from their right side outside linebacker.

The newly acquired Connor Barwin, who will be playing the left side on first downs, is going to be asked to cover the tight end or at least jam him and delay his release off the line.  The left outside linebacker will be in pass coverage more often than the right side outside linebacker, because most teams are right handed and they line their tight ends up on their right side on first down.

After first down Barwin will be lining up in different spots and given a chance to get after the passer.  The former Houston Texan will begin the season in this role, but he’ll need to demonstrate he can get to the passer or before too long you will see another linebacker or two on the field.

The outside linebackers are supposed to provide the most pass rush pressure in this defense.  The defensive ends will have a tougher job of getting to the passer because they’ll be lined up inside and they don’t have the freedom to just run up field in their pass rush.

Most of the time that ROLB is coming off the ball as a pass rusher with his “hair on fire”.  These guys will be dropping into coverage only one out of every ten times the ball is snapped.  They are pass rushers and the best of the two will be on the field trying to make a difference.

The Birds aren’t going to decide to put the guy out there who covers the pass routes the best.  It’s going to be the guy who can beat the opponent’s offensive tackles and get to the quarterback.

I wouldn’t be surprised if over time, Graham wins the job because he’s younger with fresher legs.  Cole is a warrior, but at some point in the career of every player, his legs abandon him and he loses his effectiveness.  We’ll see if last year was a mistake or did it tell us the truth.