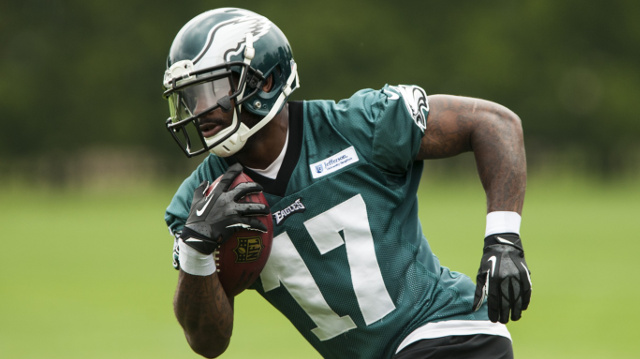 Things aren’t looking up for the Eagles’ wide receivers.

Having already lost Jeremy Maclin for the season, and gone through the Riley Cooper controversy, the receiving corp. has now lost newcomer Arrelious Benn for the season with a torn ACL.

Benn was acquired from Tampa Bay in a trade, and was expected to compete for a roster spot. The former second-round pick had barely been practicing since Training Camp began, and suffered the injury during a special teams drill.

Benn is the third player that the Eagles have lost this season to a torn ACL, with the other two being Maclin and linebacker Jason Phillips.

What cha gonna do now Howie!

They call me mister glass……

Maybe the Eagles can Trade DE Trent Cole to the Falcons for WR Harry Douglas..

Cole not a Fit for the Eagles and Falcons need a Pass-Rushing DE in a 4-3 that they run..
Duglass is a Decent WR who see’s limited time due to the Falcons having WR Roddy White & Julio Jones so Douglass is a luxury for the Falcons and this would be a Deal that’s a win-win for both Teams..
Your becoming a Joke anymore GmCliff.. You think every player is going to be a Stud, or that every transaction or Draft PIck is going to be a homerun.. Wake-up my man…

No I want better quality. Harry Douglas is not DECENT, nor a luxury to the Falcons and wouldn’t provide anymore than Benn would have, with a decent year. If he were a luxury, they would use him a lot more, because he would stand out as such. But he doesn’t.

I have been with you Paul on Trent Cole, we both were stating that since the end of last year. Understand, I am having a logical disagreement with you, nothing disrespectful. I hope you know that. This is just you, and I having one of our few disagreements.

So, Excuse me, for having high standards for my football team, and vetoing players like Marty Gilyard, Dan Connor, Brandon Lloyd, and Harry Douglas, who give me nothing in terms of long term benefits. I want a championship, and I want more than decent depth. That is no joke.

I’m so f**king tired of these injures that keeps haunting us yr after yr after yr during camp…can we please get a little luck from the football gods?? enough already

Make a trade with the Chargers and get WR Robert Meacham. I hear he’s on the bubble..

Chargers just lost WR Denareous Alexander for the Season
With a Torn ACL.. Chargers will provably need Meachem who has Disappointed since signing as a Free-Agent with them 2 Years ago
WR’s are a dime a dozen, no way does anyone pick up his Contract

Keenan Allen will shine for them, in his absence.

Will struggle some his Rookie Season as most WR do..
Has very good upside, and will take him a season or 2 to blossom..
Needs to improve his Route Running,Blocking and overall durability as most young Receiver’s do…

I agree with you somewhat on that Paul, but if I am the Chargers, I am very Happy, I have him in the fold. Major upside, and Big time potential.

All rookies have their struggles, that’s realistic, but the special ones, have a way of separating themselves from that. We’ll see what happens.

No doubt that Kennan Allen will be a very good NFL Player if he stays healthy and focused, from all reports, he’s gotten off to a good start with teh Chargers..
WR (outside of QB) is the most Difficult Postion to adjust to from the College Game to the NFL Game..
Compeition is tough every game, much more Press Coverage then they ever saw at the College level, the speed of the game, much smaller windows and field to work with, and more sophisticated Offenses and with all the “Audibles” that a NFL QB will go through in a a game where the Routes are changed, Reads have to be made on the Coverages shown and obviously have to be on the same page as your QB.. All things that take Time to develop and harness as a Rookie WR which is why you seldom see most Rookie WR’s make big impacts during their Rookie Seasons…

Because he is not all that….Don’t want him either, and never liked him

Momah and Shepherd have been standouts during camp so far on a team that’s going to be run and TE oriented so I’m not really concerned. We’ll find out if Momah and Sheperd’s development transfers to preseason in a couple of days. Until then it makes sense to wait until league cut downs and give the players already in camp more reps. Alternatively, they could possibly snag Ramses Barden from the Giants probably for a late round pick in 2014.

CHances are the Giants hold onto Barden since Hakeem Nicks will most likely test and leave via Free-Agency after the 2013 Season
Look for him to go to the Carolina Panthers and play closer to his home base. Giants very unlikely to tie up a ton of $$ to WR Nicks since they signed Victor Cruz to a long-term Deal..and especially since Nicks has not played a Full Season since 2010
But I do agree that there will be some quality WR’s on the waiver wire come mid-late August that could be had for zippo…

2013 Eagles WR Corp looking like D-Jax,Avant, D Johnson, Cooper & Shepard with Momah on the Practice Squad if I was a betting man

I do like him Butch. Good choice of player. Ramses Barden, young player with long term upside to trade for, not a wishy washy Harry Douglas.

Barden with long term growth.. This is his 4th-5th Season in the NFL already without making an impact yet.. C’mon Gliff, You give Barden 4-5 Years but are very quick to write off Young Receivers on the Eagles already..

yes, Paul he was hurt 2 of his 4 years, and is stuck behind Nicks, and Cruz. Yes, I like him better than the young slop options that the Eagles are throwing at us absolutely.

Cunningham, Sheppard, and Salas, with all due respect are products of your wishful thinking. Bring in someone young with some real talent.

From what I seen of Momah yesterday during the WR/CB 1 on 1’s (against Patriots defenders)….Momah couldn’t get seperation…doesn’t seem to be as physical as he needs to be. He didn’t look like the receiver we’ve heard about, at all yesterday!

Real, that is what I saw of him on Monday too. He is so slight that smaller guys are jamming him.

yes sir, that’s exactly what I saw…he’s too big of a guy to be allowing that to happen.

Momah simply has too little experience to compete at the NFL Level this Year.. He’ll be Practice Squad material and work on his Route Running/Get Stronger and maybe be able to make the Squad next Camp..
The kid has a lot of Talent, but let’s face it, very little experience to expect very much out of him this year..
Don’t forget about WR BJ Cunningham and/or & George Salas as a 5th WR

-The Eagles secondary struggled against Brady and the Pats offense. Brady made them look like High School pep warner guys. Its still early here and no game planning involved on the Eagles side, I believe the Pats did watch the tape and tried getting a over night feel for the eagles players. No doubt about it. That’s Brady and that’s Belichick.

Quick….name the Patriots starting wide Wrs without looking them up.

Pats are working without their Top 5 Receivers from last Season (Welker,Gronkowski,Hernandez, Lloyd & Deion Branch) so Brady is working with a bunch of Rookies, New Players and former Back-ups which does not bode well for the Eagles Secondary..

Your right… It’s the QB’s who make the Reciever’s more times than not
unless your Calvin Johnson, Lynn Swann, Jerry Rice, John Stallworth type

Pretty sure Pats fans aren’t happy that their top 5 pass catchers are gone from last season except for Gronk who may miss substantial time. Pretty sure every team’s fans would be upset if that happened to them.

Anyone want to guess which Eagle veteran Qb has never had a 1000 yrd WR over the couse of his career?

Too bad he had to play with all those terrible players. Unluckiest QB on Earth that MV7 is.

Roddy White wasn’t a consistent starter until Vick was gone. It is amazing how your career takes off when you become a starter on a team. 8 games in 2005 and 5 games in 2006.

With probably triple the playing time since he also tripled his amount of starts. My point is that you are making points without all of the facts and without full context. If you don’t like Vick fine, not sure how much i do either, but piling on with assumptions is what it is.

Maybe or maybe he grew into his own in his 3rd season. Maybe the coaches tried to feature him more. I don’t know and clearly neither do you. You are really grasping at straws here.

just making a observation. that his career took off right when he left… makes me wonder well not really i dont wonder about anything vick blows at qb always has and always will the proof is in the pudding.

the guy is and always was a bottom tier qb at best and it totally sucks as a birds fan that i need to see his shit again. this bum cant even dominate a late 3rd round sophmore QB in practice, it is totally embarrassing that this is our 2013 future.

per the jersey journal, so far here are your qb numbers in training camp

jon hart are we still expecting barkley to start this year?

Don’t misquote me MHennessy. I said it would be between Vick and Barkley. Camp has not ended yet buddy. Remember Barkley is throwing to the 3rd sometimes 4th team WRs. Put him in there with the 1s and see what he can do. And from what Im hearing Barkley may get an opportunity with the 1s soon.. Stay tuned

lmfao. oh yea i forgot you said it was between vick and barkley, great prediction

JH, you know your my boy. But Barkley isn’t going to be anything for the Eagles, with or without an opportunity.He is third string exclusively.

No way JH. Dude finally doesn’t have a stacked deck with top skill players at ever position like he did at Mater Dei and at USC.