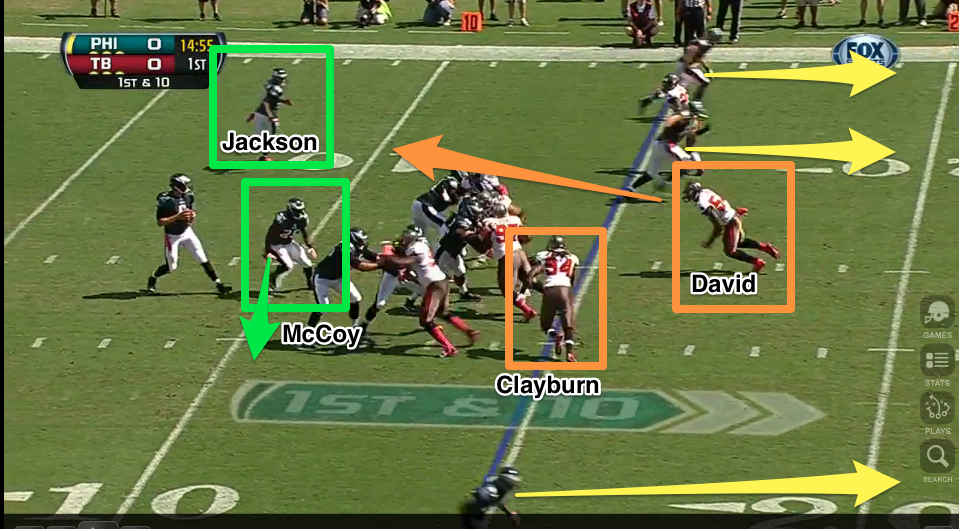 Nobody can take away what Nick Foles did yesterday in the Eagles-Tampa Bay game, but you also have to give credit to Chip Kelly because it was the best game he has coached as a NFL head coach.  The script of plays in the first drive was all well conceived and on the money.  The screen play to begin the game was especially so.  Foles does a great job of executing the plan.

The Eagles started the game on their own 15-yard line.  It just so happened that Tampa Bay was coming after Nick Foles with a blitz from the Eagles left side and they were sending all their linebackers.  The worst play for the Bucs to defend on this play would be a screen to the right side.  That just happened to be the play the Eagles were running.

The Eagles had running back LeSean McCoy lined up on the Eagles left side at the beginning of the play.  When the ball was snapped he slid to the right side under the cover of his offensive line, then he continued sliding outside on the right side in position for the screen.

At the same time, McCoy was sliding over, Eagles center Jason Kelce and right guard Todd Herremans were faking a pass block, then sliding out in position to block for the screen after the Tampa Bay defensive linemen had left in pursuit of Foles.  There was nobody there to play the screen.

The only linebacker who could have possibly covered McCoy on the play was Adrian Clayburn who was lined up to rush the passer from the Eagles right side, but on the snap of the ball, he went to the left side of the formation and blitzed behind David.  It was the worst defense to be in against the screen to the other side.  The Bucs has all their linebackers blitzing to the Eagles left side as Foles and McCoy ran a screen to their right side.

McCoy slid over, took his time acting like he was blocking for Foles, then he slid out to the Eagles right side in back of Kelce and Herremans.  There was nobody there for either of the offensive linemen to block until they went upfield twenty yards.  This is the sign of a great call or just a poor job by the Tampa Bay defensive coordinator, when the linemen don’t even have anybody to block.

This wasn’t a sound defense or somebody blew their assignment.  Somebody has to be responsible for McCoy on this defensive call.

Kelce finally encountered Tampa Bay safety Mark Barron.  The Eagles center body slammed him and McCoy kept rolling along for another twenty plus yards.  McCoy cut back to his left after Kelce made his block and he was eventually tripped up by cornerback Johnthan Banks.  Herremans never blocked anybody, he just kept running straight ahead downfield.

It was a great call for the Birds.  The play caught the Buccaneers completely by surprise.

As Expected Chip Kelly Doesn’t Name A Starter For Sunday

Nick Or Vick? What Will Kelly Decide?