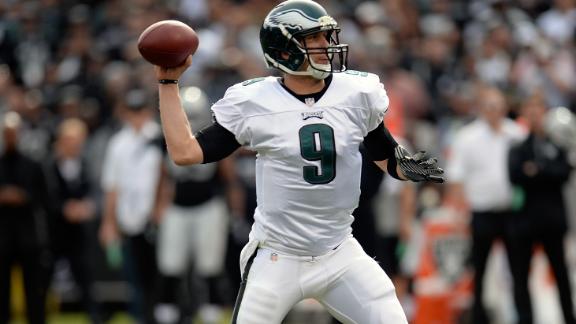 The Philadelphia Eagles made it two in row in front of the fanatic home crowd. Fans were treated to some rarities. The black jerseys made an appearance and Desean Jackson’s most memorable end-zone play of the day was breaking up an interception.

Most would agree that we will take the win even though the game like the one versus the Redskins got too close for comfort towards the end. I would agree with the fact that closing out football games is not one of Chip Kelly’s strongpoints, but can I really focus on that to begin my week?

Foles continues to add his name next to quarterbacks who will be in the Hall of Fame. I won’t be the target for jinxing Foles for what record he could be in sole possession of when he faces the Lions week 14.

I’m exciting for him, for the team, and for us as a fan base.

We are witnessing football that none of us have been treated to before. On offense it’s a speed and call style that shows something new by the quarter. A rare combination of surprising quarterback play, an elite running back, a rookie tight-end showing tremendous possibilities, a playmaker wide-out and a guy named Cooper who has no business being mentioned on a weekly basis yet continues to make plays and be recognized.

On the defensive side of the football, the twists and stunts this 3-4 is attacking opposing quarterbacks with is something special to watch. This is not the front sets that the late Jim Johnson had or what Buddy Ryan shut other teams out with. This defense is one that was labeled as “transition,” a setback that would put tremendous pressure on the Eagles offense to score on every possession. What this defense has become is remarkable, and improvements both individually and as a team are witnessed each week.

Can I get some love for the punter? Donnie Jones is demonstrating that having a Pro-Bowl level punter can actually help win football games.

How about that Chip Kelly? The guy forces a smile out of the grumpiest of doubters and fans. He knows he makes mistakes and has no problem admitting them to the media when questioned. All he cares about is winning and not what the experts say is the proper recipe for winning.

Plenty of things that I did not like on Sunday, but why get into it? The Cardinals game is over and we walked away with the win. The Lions looked great on Thanksgiving, and we play them next. It’s time to prepare for the likes of Megatron and Reggie Bush. Our offensive line gave up a lot of sacks and the Lions have a tremendous pass-rush from the inside.

Four quarters to a football game, and this season is three quarters in the book. The fourth quarter matches us up with the Lions, Vikings, Bears and Cowboys. Don’t talk about nest year’s draft or what week 17 could mean heading into Dallas.

Talk now, not tomorrow or yesterday. What are you feeling at this moment? How does Monday feel after witnessing yesterday, and what needs to be done by the coaches and players to keep this thing rolling?

The Eagles are now a passing team. This team has transformed from a Vick/ Shady run team to a Foles/ DJax passing team right before our eyes. Teams zeroed in on Shady and dared Foles to beat them. Big mistake! Sooner or later teams are going to have to stop crowding that line of scrimmage.

I am curious to see how the Eagles attempt to match up with Reggie Bush when split out as a Receiver (which he does many times)
Maybe put CB Boykin on him.. Can’t see a LB or Safety matched up with Bush..
I would defeinitrly double team MEga-Tron with CB and A Safety and just follow him where he goes, he is going to make his catches, the key is to make him earn his yard, tackle him once he catches it to reduce the YAC and don’t let him get behind the coverage.. No sense in sugar-coating or trying to disguise a a Double Team on him, I would just line up a CB and Safety on him at all Times and take your chances with their other Receivers beating you (Nate Burleson, etc…) but the Regiie Bush match-up concerns me when he’s lined up as a Receiver of goes in motion out of the backfield.

the read option was made for the shifty east-west cut-back style of McCoy. A number of changes have made it more difficult for McCoy to be as dominant as he was. Foles taking majority of snaps in the shotgun, and Foles being a 5.2 40 runner does not help either. At time I wish Shady would run straight and then make a move, and not four moves before running straight. Because McCoy is so elusive, teams will still play close to the line. Chip will continue to have D-Jax stretch the field or move around in motion, but will do so with the intent on getting the ball to the bigger bodies receivers in Cooper, Celek and Ertz. We may see Brad Smith play a little more slot receiver in the next few weeks, as Avant has no speed to really draw the attention of being a decent possesion receiver. Last week I saw plays where the Cards had D-Jax covered up, and I pictured what a Maclin or another play-making receiver could do for this offense. Smith has play-making skill, all we picture with the guy for the time being is the botched “non wildcat” formation, but he did some really nice thing with the Jets and Bills, and I do see some contribution outsideof what he does on special teams. The Lions are going to give us the biggest “TRIO” test since we played the Broncos. They have a top QB, Bush is a play-maker, and Megatron is a freak of nature. So how do we slow down Calvin? How did the Steelers who I believe as a footballl fan have a worse all-around D than the Eagles, find a way to take Megatron out of the game during the second half when they matched up a few weeks back? I could se Billy Davis using that footage this week for his players. Everyone is predicting the need for the Eagles to score 35 points to be able to stay in this football game, but I don’t feel that’s a must, it would be nice but I think we could win putting up the 27+ pts as we have done the last few weeks. Unlike Palmer and RG3, I do worry that an early lead and holding on in the 4th qtr would allow Stafford to beat us. McCoy will be a 6-8 reception guy on Sunday. I Like D-Jax to hit 100 yards and a TD. Ertz will find the endzone once again, and maybe an end-around for B. Smith will make us forgot about last week. I like the Eagles 30- 23.

Please hit the enter key once in a while – that’s hard to read with my bad eyes.

IrishEagle, I will certainly do that moving forward.