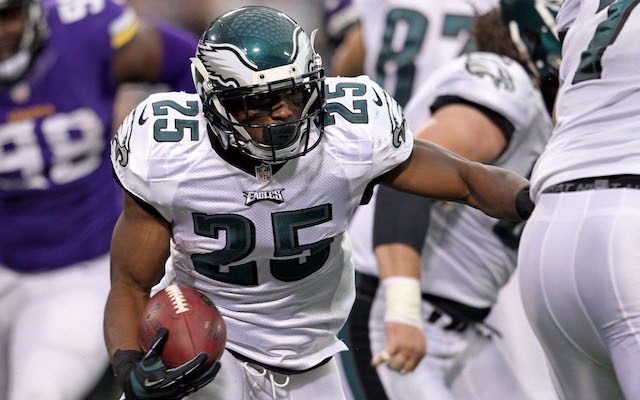 The Eagles are fortunate to have arguably the top running back in all of football playing in his prime.

There really isn’t much for McCoy to improve on at this point in his career. Yes, we’d like to see him be a little more decisive at times, but other than that you can’t really find fault in his game.

However, Chip Kelly can improve a bit on how he utilizes McCoy.

Hopefully in the off-season, Kelly will consider developing more run formations out of traditional I-formation sets instead of relying on draws and zone-read attacks the majority of the time. Running McCoy out of different formations just presents the Eagles with a different way that they can damage an opposing defense, and it will be one more thing that teams will need to prepare for.

Before the last two weeks of the season, Bryce Brown really struggled to get going in Kelly’s offense.

While LeSean McCoy adapted to the offense right away, it took Brown most of the year to adjust to running out of shotgun formations without a lead blocker.

Brown did finish the year strong with a a long touchdown run against the Bears, and a couple of huge runs against the Dallas Cowboys in the game that clinched the division.

Some have speculated that Brown could be a guy that the Eagles look to trade in the off-season, but I wouldn’t be so quick to move the talented prospect. While Brown has shown enough over the last two years that he could net something of value in a deal, I’d rather just keep him around as the primary backup to McCoy.

I like Chris Polk a lot, but I wouldn’t have confidence in him as a featured back if something were to happen to McCoy. I believe Brown is talented enough that he could potentially fill in very nicely as a starter if need be.

Polk showed that he can be a very nice role player in this offense.

He’s a powerful runner that can pick up some tough yards, and he’s versatile enough to also catch passes out of the backfield. By the end of the year, Polk had shown the coaches enough that he had earned himself a handful of plays with the offense every week.

As I mentioned above though, I don’t feel good enough about Polk that I would trust him as the team’s primary backup if something were to happen to McCoy. I think the current role he’s in is perfect for the team, and for himself.

Tucker was on the roster for the majority of the year, but never got an opportunity to play.

He looked pretty good in the preseason though, making enough tough runs and big plays that he began the year on the practice squad.

Its going to be hard for the Eagles to justify keeping four running backs next year, but if the team were to deal Brown or Polk, an opportunity could open up for Tucker.

The running back position may be the most complete and stable position on the team.

From top to bottom, this is such a deep, talented group. The Eagles have put together a strong backfield with three guys that have shown they can make plays at the NFL level.

If there was a position that the team should stand pat in, this would have to be the one.

Unless a team comes banging down the doors to get Bryce Brown with a high draft choice, there’s really no need for the Eagles to pursue any veterans in free agency, or make the position a priority in the draft.

Shady is the truth.

Hope we don’t waste his prime with a gun shy QB to only win the passer rating Bowl.

Who are you talking about Luck and his ints or Brady? Because I know your not determining the best QBs in the NFL don’t throw ints. Rogers has more ints than Foles, Luck, Manning etc lol. I don’t understand your point? Foles is gonna have to learn to take some risks. I will have no problem if next year Foles has 40 tds with 13 ints and is taking some chances.

It’s true that all QBs throw interceptions. The great ones don’t throw them at key moments though. My point is that I would rather have a QB who is “gun shy” yet throws 27 TDs, than one who is a “gunslinger” and throws costly ints at the worst possible time.

Of course…there are huge differences in how or when an int happens.

An int 30 yards downfield on 3rd and 10 is not as damaging as an Int on 1st and 10. One is basically a short punt on a play that is only successful about 20% of the time anyway, while the other immediatly kills a drive.

BTW – did you know that ‘he who can no longer be named’ threw about 75% of his Ints on first down during his time with the Eagles?

any QB can throw 5-7 yard passes that turns into big plays designed under this offense chip implemented.

misdirection while getting the playmakers in space.

If the opposing team press and take away those easy throws we see an entirely different set of numbers.

Let’s look at the last 4 games of the season once team’s recognized Foles dependance on the short stuff along with Shady breaking for big gains.

Hell, 7 of those TD’s came from the game against the pathetic oakland raiders for God sake.

those numbers don’t mean anything.

I look at how Foles performed against formidable defenses at the numbers are horrible.

What did Foles do against a patch work injury secondary the Vikings rolled in against him?

Foles made the damn Dallas defense look like the 70’s steel curtain.

Hell, we lose that game at home in the snow against the Lions if Shady don’t put up Hall of Fame numbers.

Foles played like shit for the majority of that game.

So, I’m not looking at this through rosy glasses.

This team can contend with it’s weapons if we have a serious slinger with a strong arm and athletic ability to extend plays.

He have played well enough to get the start for next season but I expect the Eagles to improve that position if we’re going to contend with the best of the NFC.

Right now the Eagles are less than the New Orleans Saints playing at home.

We can’t expect our defense to make a play at the end of a game to save our asses every week.

We need an offense that comes out fast and smoke the hell out of opposing defenses like we thought it would be when Chip came.

An athletic QB with a strong arm gives us the opportunity to blow teams out and take pressure off of our defense.

i believe Chip will eventually give the fans that leader with the skills to take the team to the next level.

How’s those last 6 games after teams “figured Foles out” go?

Oh sorry…it was the last 4 games that he was figured out.

Didn’t we see an “athletic, strong armed QB end the game with an INT? No thanks, I’ll take what we got.

As much as I love Shady after watching Marshawn Lynch I just don’t know who is better. Lynch is the truth.

But on the topic of RBs…there’s only one frustration I have…that through 2 coaches and 3 talented RBS (Staley, West and now Lesean) a 3rd and 1 run is always such a difficult prospect for this Eagles’ team.

Indeed Vinnie. That’s an element that must be added for next season. An “I” formation package with a FB and a power run game. No misdirection, shotgun hand-offs, draws, pitch plays, or WR reverses. Lineup and go straight downhill. Chip’s shown the ability to adjust. I’d imagine he wants this fixed too.

I know, its just that its been the same problem for the better part of a decade. I’ll believe it changed when I see it changed. I don’t think you’ll see the Birds with a FB next year.

I would like to see the Eagles Trade Bryce Brown to a Team and get a 6th Rounder in Return or package him with one of their Other Picks to be able to move up a 1/2 Round or so ..
The Browns,Titans (after cutting Chris Johnson) Chiefs,Dolphins,Falcons,Cardinals,Colts,Jaguars could all use some RB Depth

Here are some RB’ s who I believe would make good fits for Kelly’s Offense and RB’s that like to run between the Tackles as opposed to trying to run every handoff around the Corner for the home-run like Bryce Brown does
Many of these Players I listed can Return Kicks, Catch Screens, etc,etc

Problem is Gloomy – there are very few Teams that feature a 1-Back who is getting that many Touches.. McCoy is one of the Few and you can add Lynch,Petersen,Charles,Lacy,Forte, Steelrs RB and not many others..
Most Teams employ that multiple RB Set to share those 25-30 Rushes per Game with 2-3 RB’s …

Most RB’s are a dime a dozen with a very short Career — 4-5 Seasons at most, on average before the injuries, the amount of carries of getting beat-up,begin to that their Toll… I would never Draft a RB before the 4th/5th Round and I would stay away from any RB who has more than 600 Carries in his College Career… The longevitiy really drops for the 4 Yers Stud RB’s in College and by the time they get to the Pro’s, they are beaten down… (Look at Mark Ingram,Trent Richardson, Beanie Wells, etc,etc…
Has anyone seen a Top NFL RB from Power Programs like Alabama,LSU,Georgia, Ohio State,Florida State in recent Years..

Ugh not another off season of Dennys “outlooks” is it? You lost all credibility last year when you called Evan Mathis mediocre despite PFF rating him as the best guard of the year. Now he is an all pro.