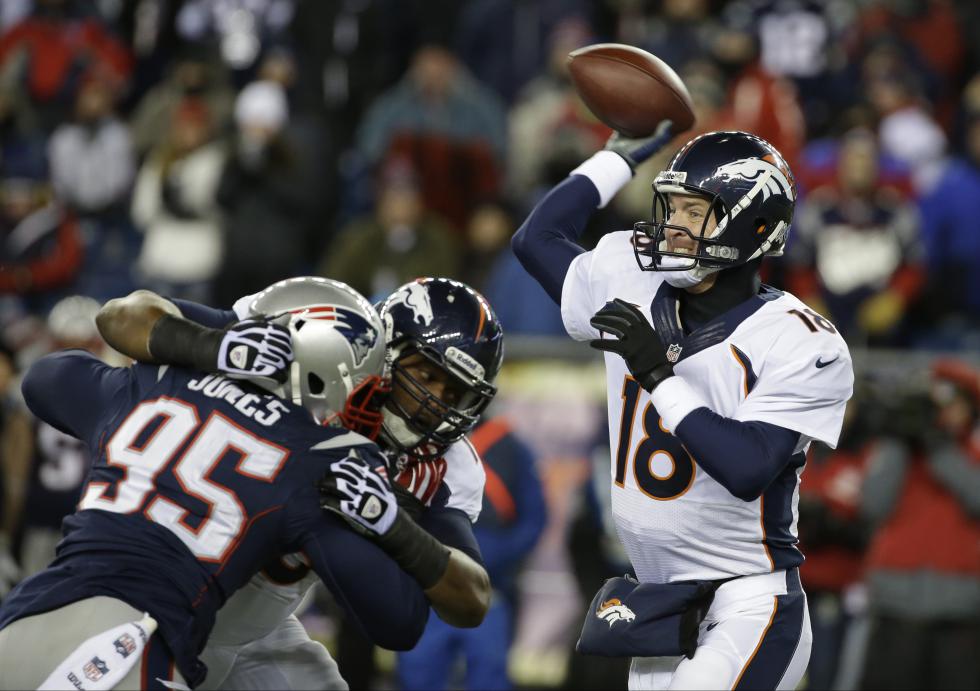 As the game approaches and the forecast becomes easier to pinpoint you will begin to hear about Manning’s poor record in the cold.  Let all of the so called handicappers use that as a reason they chose a particular side. If anyone thinks the weather will be a DIRECT reason Denver wins or looses you just do not understand the game. At the same time that Is not saying that rain/snow/and especially wind will not be a major factor in game planning. Met Life Stadium as we all know gets a notable cross wind on even a normal day. So I am aware and all of that has been taken into consideration:

Defensively Sherman can go man coverage on Thomas and neutralize him better then anyone else in the NFL. When I sit and watch Decker run his routes I see an average receiver. I believe his numbers are inflated 20-25% by the accuracy of the quarterback.  His strengths are when he is running a 2,6, or 7 route. His counterpart Wes Welker runs the 3,6 and 2 better then almost anyone in the NFL but who can forget his drop on the 7 route against the Giants a few years back. Most of the time the 8 or 9’s are coming from Thomas so you may see Manning throw more screens which are actually like a run play because few teams are having any success making a living going north in the a and b gaps on the ground against Seattle.

In the NFC Championship, Kappernick did most of the  damage with his legs. Over the first three quarters he was able to escape danger while moving the sticks and creating scoring chances for the 49ers. Obviously Manning does not have the same luxury taking off or calling his own number on a draw when needed so more then ever Moreno and Ball will have to come up big catching the ball out of the backfield. What should be noted is in the 4th quarter the medicine became the poison as Kappernick turned the ball over multiple times. As the quarter went on it was obvious to me the signal caller  had lost that confidence he carried around the first 45 minutes thus causing indecisiveness on whether to release the ball or tuck it and take off.

On offense, Wilson was able to make enough big throws ( nothing bigger then the TD to Kearse on 4th and 7 ) to enable Seattle to move on. I think Wilson as well suffers from a lack of confidence as his play had dipped considerably the last 6 weeks. And all you have to think about is if these two teams switched quarterbacks who would be favored ?  You have to give a ton of credit to Denver defensive coordinator Jack Del Rio as he has dealt with a ton of injuries and has his defense peaking as the final test approaches.

What I see is this.. Both teams scoring in the low 20’s. This game will not be like many think with Manning airing the ball al over the field. He is way to smart to play into Seattle’s strength which Is their size on the corners. Look for a more  ball control type of passing attack. Attempting to move the sticks methodically and make every possession count. Settling for three points on a drive will not be a bad thing. And Touchdowns will be that much more important.

In the end, you very well could see Manning in the same exact position as Kappernick was 24 hours ago. This time with a chance to become the first quarterback in NFL History to win the Super Bowl with two different teams. This time with a chance to solidify his place among the top 5 quarterbacks in NFL History.  If it does happen I am quite confident that Denver unlike San Francisco will make far better use of the two minutes and three time outs. When San Francisco threw that Interception there were less then 30 seconds left in the game and they were sitting on two timeouts. If they  would have used one on first down from the twenty regrouping instead of throwing a jump ball against the best cover corner in football we may have seen a different outcome.

The film and d coordinator in me says I could put together a game plan to shut Manning down. But the fan in me wants this for him. He doesn’t have a posse or talk crap on twitter.  He doesn’t flash his bling , have 5 kids out of wedlock. He is a true student of the game and he respects the game. And I think we all would be lucky for it to be 20-14 Seattle up with 2 minutes left. Seattle punts and Denver fair catches at their own 30.. Manning walks out onto the field and we hear the word Omaha… Then we see if he can create magic one more time.. There aren’t many left like him so appreciate what we are about to see in a few weeks. You could just be watching history be made…..

Stop pumping the guy up if seattle runs the chit out of the ball and dont turn it over PM aint winning this game mainly because their D gonna humiliate him in my opinion wwilson is just good QB not that accurate. Now I’m not taking away from what PM accomplished so far in his career but I dont think Pete Carroll gonna let his d make this slip away.This is by far the best defense he will be seeing since that “brady bunch” was in their prime.This meeting will be a great qb going against a great defense and i would go with the defense more than the “O” Just my opinon

at this moment i got seattle winning outright but havent analyzed that much yet. i had 49ers early too but switched to seahawks on gameday for a paycheck.

remember that the Seahawks haven’t really faced and Offense like the Bronco’s either who have 4 Top Recievers in Thomas,Thomas,Decker & Welker.. The Key is will the Bronco’s be able to run the ball to keep the Seahawks Defense honest and at least not from pinning their ears back.. If Bronco’s can do this even a little bit, I think Peyton Manning wins his 2nd Bowl Championship.. If Broncos cannot run the Ball Effectively and Seahawks can pin their Ears back and really come after Manning, then I like the Seahawks chances..
But for Now – I like the Boncos 26 – Seahawks 23
MVP is Broncos CB Dominique Rodgers-Cromartie with 2 Int’s
DRC brings one back for a 85 Yard TD Int just before the Halftime and then Seals the Game with his 2nd Int the End-Zone ..

Seattle faced a bevy of terrible offensive teams and QBs this season.

They did face the Saints, but both times at home, and we know that the NO O is not the same at home.

Up against Indy (a decent O) they gave up 34

So you’re right, it’ll be interesting o see if they can hold up the same against the Denver O.

This is a tough pick for me….I think the storyline is probably going to be Manning winning his second and then retiring………but then again, he hasn’t thrown the killer 4th Q interception we all know is in him yet so…..

I am wondering if Seattle can bottle up Julius Thomas the way that they did Vernon Davis. If not, I see he and Welker going off in this game.

Clearly not the first to say this, but the x factor is the wind. If it is a typical early Feb day in the Meadowlands Manning may have some difficulty getting the ball downfield.

bugs, as great as Seattle s DF is, if they allow Manning to field General all the weapons he has, the game could be a blowout. I don’t think Seattle’s front 7 can get enough pressure on Manning. He also gets rid of the ball faster than anyone in the NFL. Seattle has to hope Lynch can kill them on the ground, wear them down, & play ball control. I think Wilson & Lynch keep it close early, but Denver pulls away in the 4th.

Agreed. He has so many people to get the ball to, but he is gonna have to be on his A game for them to win. Lynch could explode in the 2nd half like he did last week too. That dude just wears you down.

It will be interesting with Harvin playing. They were really trying to get him the ball against the Saints. Will they try to open up the offense a little with him playing?

bugs, I agree. Harvin is a wildcard, but I think he will be ineffective, after being out all year, then suffering a concussion a few weeks back. IMHO, it’s who’s defense makes the most plays. Right now, I still think Wilson & Lynch keep it close early, but Denver pulls away in the 4th. 34-23 Broncos.

I am inclined to agree, but I think that it will be a little more low scoring than that.

I wanna know which Seahawk is gonna take a shot at Welker?

look for Seattle to dig in dat ass.

I’m seeing Russell Wilson as the Superbowl MVP with an outstanding effort from my man Richard Sherman against “Mr. Omaha”.