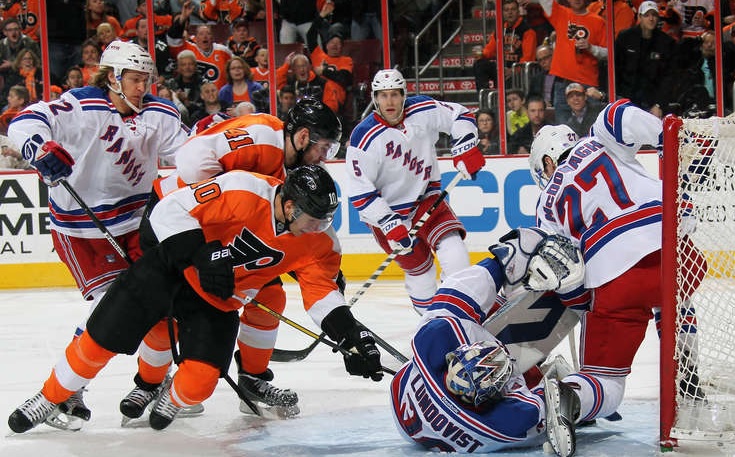 The Philadelphia Flyers kicked off the final stretch of the 2013-14 NHL season with an embarrassing loss to the San Jose Sharks on Thursday night. The team played well in the first period, scoring two goals twenty-two seconds apart to carry a 2-1 lead into the intermission. Five unanswered goals in the second period drowned their chance of an invaluable two points, though, and the Flyers fell by a score of 7-3.

Saturday’s matinee game against the New York Rangers felt eerily similar as the day wore on, but a timely goal in the second period from Wayne Simmonds allowed the Flyers to charter a different course on their way to a crucial 4-2 victory.

The Flyers came out of the gate with nervous energy, their skates moving but their decision-making questionable. Scott Hartnell committed back-to-back penalties less than two minutes in, putting the penalty killers to work early.

Adam Hall saw substantial ice time in the first period as a result. Head coach Craig Berube double shifted Hall between the third and fourth lines if the shift was starting in the defensive zone. Hall didn’t let Berube down, blocking three shots in 5:45 minutes of ice time in that period.

The Flyers settled in once Hartnell got his act together and Vinny Lecavalier scored his 13th goal of the season at the 7:04 mark. Lecavalier’s shot deflected off of defenseman Anton Stralman’s stick.

One minute and six seconds later, Sean Couturier peeled away from a defenseman and scored on the ensuing breakaway. It was a filthy deke move that undressed goaltender Henrik Lundqvist.

Although the Rangers finished the period ahead in shots, the Flyers’ up-tempo game dictated much of the play in the first. As was the case against San Jose, though, the team took their foot off the gas pedal for the second period.

The Rangers smothered the Flyers in their own end before Derek Pouliot scored just two minutes in. Pouliot’s goal was waved off as he redirected the puck with a high stick above the crossbar, but the Flyers were clearly not prepared.

Chris Kreider finally put the Rangers on the board three minutes later, redirecting the puck past goaltender Steve Mason.

Kreider nearly scored again off a breakaway on a wide open net when Braydon Coburn made a kamikaze pass to partner Kimmo Timonen at the offensive zone blue line. Timonen had no room to corral the pass with immediate pressure from Rick Nash.

Derick Brassard tied the score on the subsequent powerplay, beating Mason through the five-hole. It was certainly one Mason would have liked back, but he played phenomenally for the remainder of the game. Mason would ultimately stop 33 of 35 shots by the final buzzer, including a series of dangerous goal mouth scrambles in the third period.

A high stick on Lecavalier by Derek Dorsett resulted in a powerplay for Philadelphia, and Simmonds was able to grab the lead again by corralling a bouncing puck close to the net and beating Lundqvist far post.

Unlike Thursday, where a disastrous second period made the third period moot, the opportunity to carry a 3-2 lead into the second intermission seemingly provided them the confidence to compete. They finally outshot the Rangers in the third period while earning two powerplays and giving the Rangers none.

Luke Schenn closed the door on a Rangers comeback after firing home a rebound from a Hartnell shot with under four minutes remaining. The Rangers pulled Lundqvist for the extra attacker, but Mason and the Flyers held on for the win.

Defeating the Rangers preventing them from distancing themselves from the Flyers in the standings. Philadelphia currently sits in eight place, but the Washington Capitals are just one point behind them in the standings and beat the Boston Bruins this afternoon.

The Flyers and Capitals will match up in a home-and-home series beginning with another matinee game on Sunday at 12:30 p.m. As with the Rangers, it will be critical for the Flyers to put some distance between themselves and their opponents.

Notes From The Phillies’ 4-0 Loss To New York